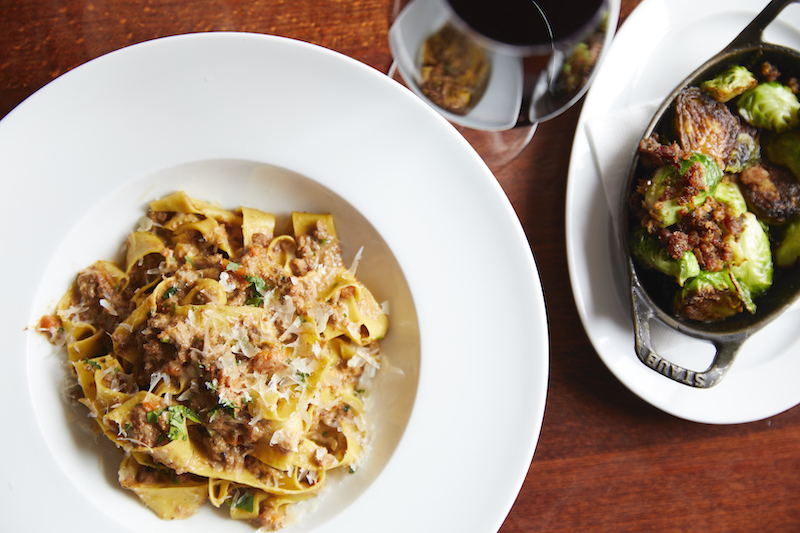 The Bolognese at Cantinetta Luca in Carmel arrives with a faint train of steam behind it, an airborne parade of flavor. On the plate, thick ribbons of tagliatelle pasta—made in house each morning—intermingle with a from-scratch sauce of veal, beef and sausage that’s slow cooked and deepens for more than 24 hours. Bits of green parsley add color and flavor. Translucent shavings of Parmesan crown the masterpiece.

By itself, it’s a vision, impressive in its presentation and better in the belly. But it’s more than a delicious dish. It’s a window into what makes Luca one of the most memorable and authentic restaurants in the most competitive category in the most restaurant-dense city in the country.

In fact, Cantinetta Luca founder David Fink describes the Bolognese as “the DNA” of the 13-year-old restaurant.

“It’s a long sauce. It has to be made over more than a day. It has to sit to get better—and ours has complexity and depth, almost like a wine,” he says. “A pasta either has soul or it doesn’t.”

The flour used in the tagliatelle is Giusto’s Vita-Grain “00” organic flour from Italy. The handmade noodles are spun by the guy whose full-time job is pasta that’s textured and tender enough to be cooked to a spot-on al dente. The sauce coats the noodles and balances the dish with a touch of cream, the result of a family recipe from the grandma of founding chef Jason Balestreri, a native of Italy. It represents the fundamentals of a place voted Best Italian, Best Restaurant in Carmel and Best New Restaurant in Monterey County when it first debuted.

“Nobody’s cooking like we are,” Fink says. “From scratch, curing salumi, curing meat, making pasta, making our own pizza dough, making each of our sauces.”

General Manager Lotte Tucker grew up on the French border with Italy and fell in love with Italy’s approach to hospitality—her first job as a young teen was arranging tables at a MIchelin-starred restaurant, though that didn’t last because she was promoted to busser, then server.

“The word authentic goes with the way Italy cooks, and that’s what we brought from Italy here: Anything that is makeable, we take pride in making,” she says. “That’s how we differentiate ourselves.”

Meanwhile, the chef team is empowered to comb the Monterey and Carmel farmers’ markets for their favorite produce, making for magnetic seasonal takes on asparagus with prosciutto, basil pizzas and roasted cauliflower. The team also finds branzino, sardines and octopus through Robbie’s Ocean Fresh Seafood and Jerry’s Fresh Fish, the two top family-owned, sustainable fishmongers based on Monterey Bay.

Like the pasta, the breads are made daily by Luca specialists, who are veteran experts in the likes of ciabatta loaves, bastoncino al formaggio breadsticks and rustic flatbreads. The proprietary pizza dough is another can’t-miss crowd favorite, blackened and bubbly from the custom-built Mugnaini pizza oven and the foundation for unique delicacies like the pizza Antica with Luca’s fennel sausage, white ‘nduja and fresh basil.

The craft-forward philosophy doesn’t stop at the food, which is particularly clear with the ever-evolving bar program by drinks director Daniel Watson.

His Tequila Baccatini is exhibit number one, with a tequila he infuses with cherry and a shrub he creates with raspberry, blackberry and blueberry. It’s doesn’t veer anywhere near too tart or sweet, making for a drink as well-rounded and refreshing as it gets. His take on a classic, the Zombi Di Luca, surprises with passionfruit and local plum syrup plus three rums, summoning a revelation that’s both tropical and Northern California farm-fresh.

His weekly specials get more seasonal still, and have been huge hits, including his foraged huckleberry old-fashioned and a summer spritzer built from gin and his own baby-cucumber bitters. He makes ginger and rhubarb beer for a Zenzero Rye mule-style cocktail and assembles caviar-stuffed olive ice cubes for the house Carbonadi Martini.

Next to the bar appears a sight to behold, and the only meat locker of its kind in Carmel. It’s the engine behind the menu-topping salumi board and its range of coppa, prosciutto, pancetta, bresaola, speck, calabrese, mortadella and habit-forming white ‘nduja spread on house ciabatta.

The wine list, meanwhile, reflects the Italian connections and worldly background of Fink, California wine country insight and a staff well-versed in curating the right choice for eaters.

The by-the-glass selection stands out for its fair price points and diversity (check out the Chianti Castello dei Rampolla, which goes deliciously with much of the menu). The bottles build off Old World relationships with the likes of the Antinori wine family and the wealth of elite personal connections the Mirabel Restaurant Group—which includes Luca sister restaurant Aubergine, the only Michelin-starred restaurant for four counties—develops in hosting Relais & Châteaux GourmetFest. The result is an eclectic mix of Italian and Californian wines sprinkled with rarities from Fink’s private collection, with custom flights starting at $18. Discoveries abound, like the Negro Onorata Favorita, a cousin of Vermentino with crisp minerality and a hint of saltiness from the sea (great with the sardines or salume), and the Il Fauno di Arcanum (perfect with the bistecca).

“We’re looking to find a balance that appeals to our international audience and loyal locals, at every price level,” says wine director Janet Elarmo.

But while the soul of the place may live in the sauces and pastas and all the hand-craftsmanship, the heart of place isn’t a pasta dish.

It’s the heart of a servant.

That starts with Fink. Elarmo cites his Southern “open home” upbringing and an unwillingness to ever say no to a guest. Tucker adds: “He’s always anticipating guests’ needs and making sure everything’s extremely detailed and organized.” But it extends all the way to the back of the house, which can read like hyperbole without an understanding of the way Luca fosters staff cohesion.

The team shares family meals before every shift. Friendly competitions drum up enthusiasm, and it’s not just a server awarded for moving the most Tomahawk steaks during Car Week, but a server and his or her partner in the kitchen. Field trips to places like Albatross Ridge vineyards and partner farms happen frequently.

The open kitchen symbolizes that connectivity, and contributes to both the spectacle of making everything by hand and arguably the liveliest and most social atmosphere in Carmel. It’s old-school quality meeting new-world energy.

“Spaces cultivate interactions,” Tucker says. “The kitchen knows what we’re doing, we know what they’re doing, [and] there’s a respect that comes with it. There’s no barrier. With a closed space you become blind to others’ efforts.”

Instead, that effort is clear, from the open kitchen to drinks in the glass to the texture of the steak, pizza and pasta on the plate.