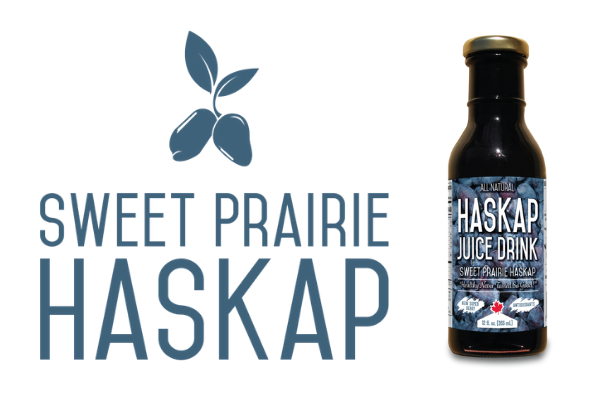 Although haskap is not yet well known, this dark blue berry grown on the northern plains of Canada is poised to be the next big thing in antioxidant-rich, nutrient-dense superfruits.

Mark and Courtney Wilson of Carmel are now spreading the word about this new health food through their newly formed company, Sweet Prairie Haskap, and are urging people to try a bottle of haskap juice and report back about what it does for them.

“We want to drive consumer awareness,” says Mark Wilson, who has worked in the food industry for many years and is now dedicating himself to haskap, a crop grown in his native Canada.

The Sweet Prairie Haskap Juice sold through their website drinkhaskap.com is made from the berries and leaves of the haskap plant and purified water. The resulting drink contains an abundance of polyphenols—antioxidant compounds that reduce inflammation and have a variety of other health benefits—as well as anthocynanins, a type of antioxidant that protects against heart disease and cancer, and a variety of important bioflavonoids. In addition to its health-enhancing qualities, the juice is also a source of natural energy.

“Haskap has three times the antioxidants of blueberries,” notes Courtney, which makes it an ideal supplement to protect cells from free radicals, which can damage body tissues and lead to chronic conditions such as diabetes, high blood pressure, hardening of the arteries and cancer.

It can also be consumed as a natural energy drink, which Mark says he uses himself. “It’s not an instant hit, but sustainable,” he says. “It gives me energy that seems to last all day, and prolongs my endurance and gives me focus throughout the day,” unlike the quick pick-me-up and subsequent crash caused by caffeine.

The juice contains up to 9 grams of protein per serving, which helps the body build and repair tissues, and a range of nutrients that includes Vitamins A, B, C and D, and potassium, calcium, iron, phosphorus, manganese and magnesium. In fact, the Vitamin C content is significantly higher than that of oranges, strawberries or raspberries.

Haskap has long been known in ancient Japanese culture as “the fruit of life, longevity and vision.” It has been used for hundreds of years in Asian traditional medicine and also by indigenous peoples in Canada.

The haskap plant is native to the northern hemisphere and can be found in Asia, Russia and Canada. In recent years, Mark says, an effort to grow haskap commercially is under way in the Canadian province of Saskatchewan. He became intrigued with the plant’s potential after meeting farmer Marg Sullivan, who with local universities and like-minded farmers was working to bring haskap to market.

The berries and leaves of non-GMO haskap, grown organically on the open prairies of Canada, are pressed to create Sweet Prairie Haskap Juice. Being grown in a harsh environment with cold winters and short summers forces the berries to develop concentrated levels of beneficial nutrients, says Mark.

The berries are powerful sources of anthocyanins, present in red, blue and purple fruits. Anthocyanins are said to protect against chronic diseases and also shield cells from damage caused by free radicals, reducing inflammation that can affect a variety of body systems. It is also a source of quercetin, a flavonoid that aids exercise performance.

The Sweet Prairie Haskap drink is all natural and has no added sugar, which makes it a refreshingly tart-sweet drink.

The Wilsons say they have been reaching out to a variety of different consumers who could benefit from haskap. Endurance athletes in particular often take quercetin supplements to help in recovery from exercise and to ease joint and muscle pain, and haskap contains significant quantities of this vital flavonoid. Courtney says another group that would be helped are people with chronic illnesses who are interested in holistic and natural remedies.

Mark notes that anyone who is interested in boosting their natural immunity and good health can take advantage of haskap, since there are so many beneficial qualities that it can offer.

Clinical studies are under way to quantify the health effects of haskap, Mark says, and more information on the plant and its many compounds can be found on the Sweet Prairie Haskap website. “We’re trying to understand what this little berry can do,” he says.

The Wilsons are also getting foodies involved in the process. The flavor of haskap berries, which Courtney describes as a cross between a blueberry, raspberry and cranberry, can be integrated into a variety of foods. The juice can be used in cocktails and so they’re working with chefs and mixologists. In fact, the blog on their website contains a variety of intriguing drink recipes, like the Sweet “P” Cosmo Cocktail and the Prairie Breeze—made with haskap, grapefruit juice and vodka.

Their primary focus at present is just getting the word out about haskap and how it can help people. “The response on social media has been very positive,” says Mark. “But it’s a long process.”

And the couple is definitely interested in hearing from customers who try Sweet Prairie Haskap. “We’re connecting with people—it’s a fun process,” says Mark. “We want to hear your feedback.”