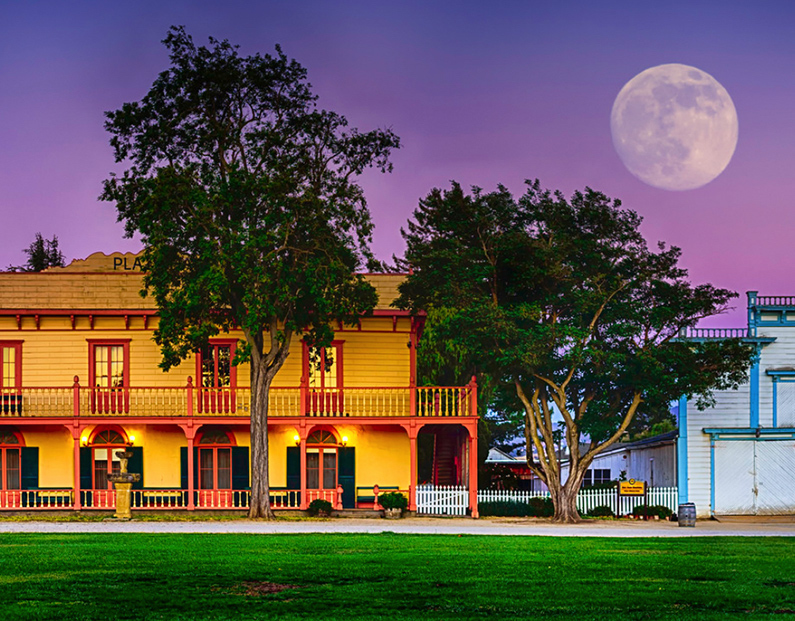 In many ways, San Juan Bautista continues to be a unique snapshot of California history, with its adobe buildings, mission, and plaza that remain much the same as they were in centuries past. The mission, founded in 1797, put the town on the map, before it became a bustling commercial center and stagecoach hub in the mid-1800s.

Mission San Juan Bautista faces what is now a State Historic Park, a lovely plaza surrounded by buildings from a bygone era. The old adobes that once housed Mexican generals are today at the center of a vibrant, lively village.

San Juan Bautista of the 21st century is reinventing itself as a tourist destination and a focal point for foodies—with the opening of new, adventurous restaurants and taprooms in the past few years. Festivals and events draw thousands to its streets for everything from the Rib Cook-off in May to the Antique Collectibles Fair in August.

The Mission city observed its 150th anniversary in September, but that was just the beginning of a series of family-friendly fall and holiday events that combine the best of old and new traditions.

Just about every weekend, there’s something going on in San Juan Bautista. On the schedule for this fall are Gold Coast Rods Car Show on Oct. 6, Rotary Ghost Walk Oct. 25-26, Day of the Dead/Dia de los Muertos celebrations Nov. 1-3, and the Holiday Stroll and Downtown Merchant Open House on Nov. 16.

In addition, Living History Days are held year-round on the first Saturday of each month at the buildings around the Mission Plaza. Visitors can see volunteers re-create what life was like in the 1800s, with craft, cooking and blacksmith demonstrations. One of the popular features of Living History Day is the outdoor oven or hornito, where bread, cookies and other items are baked.

Good food has long been an attraction for San Juan Bautista, and although many restaurants have come and gone over the years, certain ones have been favorites with locals and visitors for generations. In the same block, Doña Esther and Jardines de San Juan Mexican restaurants continue to have loyal followings—Doña Esther for its Sunday buffet and Jardines for its outdoor garden patio—and San Juan Bakery continues to turn out delicious breads and pastries as it has for many decades. Other long-time fan favorites are Margot’s Ice Cream Parlor, which also offers exquisite handmade chocolates, and Matxain Etxea Basque restaurant, offering Basque specialties served family-style.

But as members of the San Juan Community Business Association point out, there is also much that is new and intriguing about their town when it comes to dining out.

“There’s something here for everyone,” says Fran Fitzharris, owner of Brewery Twenty Five Taproom and chair of the business association’s hospitality committee. “We’re inviting everyone to rediscover San Juan Bautista.”

“We want to get people to re-visit us, because things have changed,” says Jill Glass Pagaran, chair of the business association.

The San Juan dining revolution kicked off a decade ago, when Vertigo Coffee opened at 81 Fourth Street—featuring its own freshly roasted coffee and delectable breakfast and lunch selections. Around the same time, Bear’s Hideaway, a premium wine, beer and cigar bar opened its doors at 402 Third Street. The opening of Windmill Market prior to that was also instrumental in bringing quality meats, produce and prepared foods to the town.

Earlier this year, the opening of Inaka Japanese Restaurant brought a brand-new flavor to downtown San Juan Bautista at 313 Third Street. Helmed by the Sakaguchi family, the restaurant features a sushi bar as well as table seating, and they pride themselves on creating the freshest rolls, sashimi and other authentic Japanese cuisine.

Also new to the scene are two taprooms—Brewery Twenty Five and 18th Barrel—both opened in the last two years to an enthusiastic response. Fitzharris says Brewery Twenty Five at 106 Third Street is a labor of love for her and husband Sean, giving them a place to share their ales and beers with the public on Fridays, Saturdays and Sundays.

Just a few blocks down the street is 18th Barrel, a wine and beer taproom owned and operated by Monica and Anthony Ramirez, which features local wines and beers at the former site of Joan & Peter’s German Restaurant, at 322 Third Street. This year, they’re planning an Oktoberfest celebration in their outdoor patio with live music.

Brand-new on the scene is Mansmith Enterprises’ San Juan BBQ at 490 Mission Vineyard Road. John Mansmith, creator of the original Mansmith BBQ, recently came out of retirement to begin this new chapter. Gourmet smoked meats like brisket, sausage and ribs and pork shoulder are available every Friday 12-7pm for takeout.

Fitzharris points out that people can come to San Juan Bautista and do as much or as little as they like. Shoppers will find treasures to take home from the downtown stores offering antiques, unique gifts and home furnishings, while those who want to enjoy the great outdoors can visit Fremont Peak, play pickleball or go hiking. “You can spend as much as little as you want,” she says.

Best of all, luxury lodgings right in the heart of downtown are available at Posada de San Juan, where visitors are welcome to park their cars for the weekend or week, with most attractions within easy walking distance.