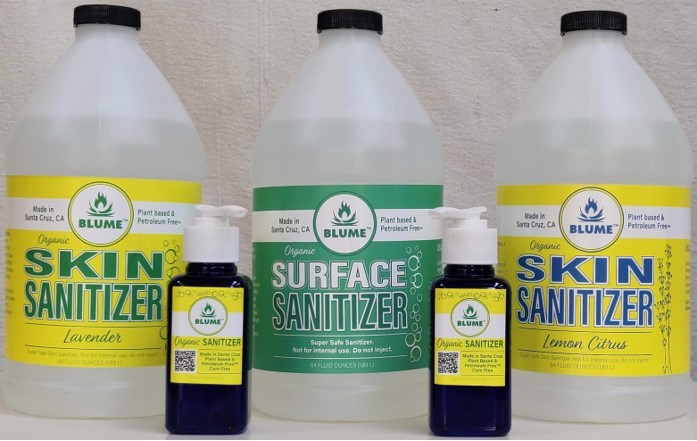 He never planned on getting into the sanitizer business.

But unprecedented times inspire innovation. And suddenly Whiskey Hill is home to an unprecedented operation that’s making unique 100% organic sanitizers for hands and surfaces under the label BlumesOrganics™.

There are three things about sanitizers Blume wants us to know in order to keep ourselves and those we care about safe and well:

Whiskey Hill Farms is a 14-acre wonderland on Calabasas Road in Watsonville that integrates all sorts of clever permaculture practices: Pipes that pass beneath compost piles heat five glass greenhouses; cultivated habitat encourages frogs to make the farm home and manage bugs without chemicals; carbon dioxide from distilling alcohol for fuel vents into the greenhouses to kick up plant growth.

A kaleidoscope of health-boosting herbs and produce grow there, including turmeric and tarragon, galangal and Hawaiian ginger, Persian cucumbers and sweet Japanese turnips, melons, dill, basil, wasabi and cilantro. Produce goes to health food stores from Canada to Florida, juice manufacturers and really anyone who loves organic turmeric, as WHF is the largest such organic grower on the continent.

“We process local resources that are wasted many ways,” Blume says, “to close the loop ecologically.”

As the world shut down due to COVID-19, Blume’s acupuncturist told him how impossible it was to get sanitizer at tribal health centers on Navajo reservation lands, where relatives of her husband still live. So he made some and shipped it to four such centers across the Navajo Nation, where COVID rates climbed 10 times as high as Arizona’s.

The company still didn’t expect to make it a business until Watsonville’s city manager—while discussing a collaboration to buy bio-diesel for its garbage trucks made from compostable waste—mentioned the city couldn’t find any sanitizer either.

The key quality of the formula is the same as any of Blume’s products: It’s organic.

“You’ll find there are so many weird chemicals in anything, sanitizer included,” he says. “If it’s certified organic those terrible man-made poisons can’t be there. None are allowed. People who don’t want to take a chance on eating or touching various herbicides and pesticides and fertilizers don’t have to.”

Sanitizer, depending on how it’s made, comes classified as either a cosmetic or an over-the-counter drug. Cosmetics, it turns out, have limited regulation to navigate. As a result, conventional sanitizers, even in major name brands, often employ cheap petroleum products like t-butanol, acetone and a troubling list of toxic substances.

When ethyl alcohol, what Blume makes, became scarce, manufacturers started making products with isopropyl alcohol, which is made from petroleum and just fine to clean the occasional cut. What it’s not designed for is everyday use. A teaspoon ingested will cause misery or death. Absorbed by the skin, it can cause neurological and organ damage.

At the same time, most ethyl alcohol sold in the U.S. is made from genetically modified corn designed to resist Roundup and other carcinogenic pesticides that kill weeds, but persist in the surviving plant.

Not so with Blume’s products. He and his team start with organic sugar cane syrup milled in Paraguay. To this, he adds water, and the same types of yeast used in fermenting wine and beer. The yeast eats the sugar, produces alcohol and releases renewable, plant-based carbon dioxide for the greenhouses.

What is essentially a sugar cane “wine” is then heated to evaporate the alcohol and strengthen the spirit, which is technically a sugar-cane rum.

That’s the base of the sanitizer. On the advice of Paul Gaylon, the owner of Santa Cruz County’s Herbal Products, he studied essential oils distinguished for the best anti-bacterial and/or anti-viral superpowers. Blume uses combinations of these oils—including eucalyptus and lavender—to give the sanitizer an extra punch and pleasant aroma.

Whiskey Hill Farms plans on progressively growing all of its sanitizer ingredients like lemongrass, lavender, and eucalyptus on its farms, becoming that much more self-sufficient and locally produced.

In response to requests from local health care providers and restaurateurs, Blume also produces a surface sanitizer—essentially a more powerful version of the hand sanitizer—for things like contractor’s tools, tabletops, treatment tables for the healing arts and anywhere children play. It also crafts sanitizers from stale beer at Fruition Brewery, Discretion Brewing and Santa Cruz Mountain Brewing for the breweries to use themselves.

“Don’t panic, go organic,” Blume advises. “But read the labels on sanitizers anyway. Be suspicious of any ingredients with a chemical name, and non-organic glycerin which will be made from petroleum or perhaps animal fat. There are a few dozen bad actors claiming to be organic but are most certainly not. If you see suspicious chemicals in the ingredients, especially if they label themselves organic, beware.”

He doesn’t bristle at American businesses that follow a model of starting with raw materials, producing a product, and discarding waste. He seems more baffled by it than anything. As a trained ecologist and biosystem expert, he wants to take that “waste,” make something with it, and make something with the outputs of that too.

“I look at the relationships of everything to each other,” he says. “I don’t look at individual things.”

He points out “ecology” and “economy” have the same root: “eco,” which means oikos, house, household and/or dwelling in Greek.

“The ecological solution is also the best economic solution,” Blume says. “That’s what hits home with me.”

Purchase online at www.blumesorganics.com or call (831) 722-4455 for additional information.