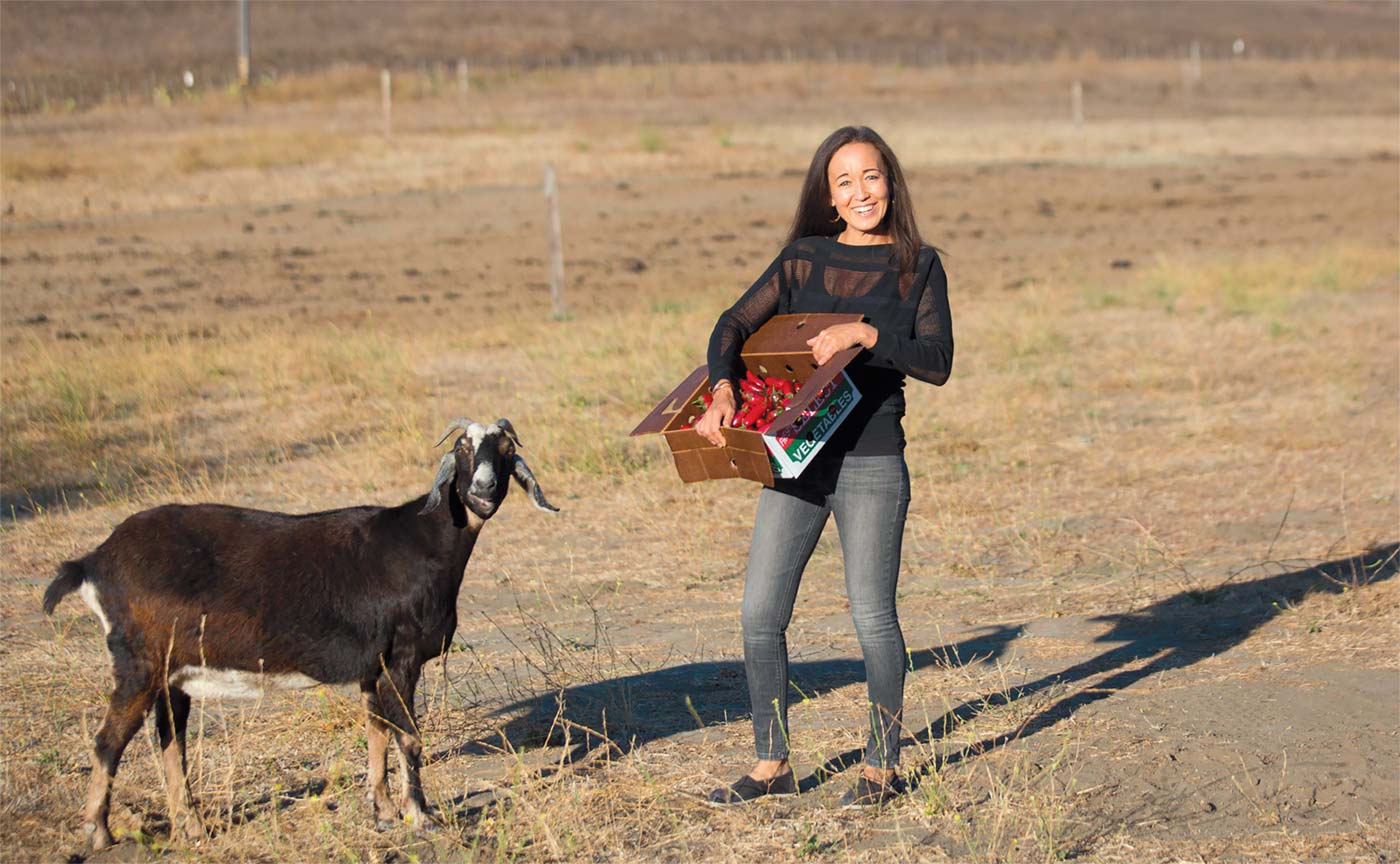 Mary Risavi had been making her own fermented food concoctions for years and always looked for ways to make them healthier. Yet the Hollister resident didn’t think of it as more than a hobby until demand boomed. “Then I realized it was an actual business,” she says.

“Give me any vegetable and I can ferment it,” says Risavi with a laugh, noting that her product line at any given moment depends on what produce is available, and “what I’m craving.” Nut butters, elderberry syrup, green tea matcha, soups and bone broths, numerous sauerkrauts and even fermented potato salad are all part of the changing lineup. Her most popular items are fermented salsa and vegan kimchi— an in-demand item because kimchi is typically made with fish sauce, a non-vegan ingredient.

You’ll find her foods on the shelves of independent markets like Star Market in Salinas and Elroy’s Fine Foods in Monterey, which carries Wise Goat’s Almond Butter with Lion’s Mane Mushroom, another of Risavi’s most sought-after products. The addition of the unusual ingredient is “because it is a mild mushroom that complements almond butter well, and has a wide range of benefits including cognitive function and immune system support,” Risavi explains.

For the winter months, she plans to debut fermented cranberry relish, Christmas sauerkraut and a detox kraut that includes black Spanish radish, which supports healthy digestion.

Her business has been especially brisk since the pandemic began in March as people have sought ways to stay well. Risavi says, “There’s been an uptick in the demand for health products…I’ve just seen everything shift that way.”

Wise Goat sauerkrauts and gut tonics have developed a cult following at farmers’ markets in the San Francisco Bay Area and other locations around the Monterey Bay, including Lolla in San Juan Bautista and Bertuccio’s in Hollister. The products are also available in a provisions store inside The Smoke Point, the barbecue restaurant that Risavi and Michelin-starred chef Jarad Gallagher started in November in San Juan Bautista. And naturally, some of her foods are served up as sides at the restaurant.

Her creations are all organic and nutrient dense, and the way she prepares them dovetails with a philosophy informed by her studies in traditional Chinese medicine. Risavi earned a master’s in TCM from Five Branches University, and as a nutritional therapy practitioner, follows these teachings in developing her products.

The name of her company comes from observing her own pet goats. Risavi says that contrary to the traditional view that goats are eating machines that devour indiscriminately, they are very particular about what they nibble on, even down to a specific part of a plant. She also noticed that their eating habits vary with the time of day, the season and any health problems they are experiencing.

Humans can learn a lot from goats in this way, says Risavi, and she is also doing what she can to educate her customers about keeping themselves healthy by carefully choosing what they eat.

Consuming foods that contain live cultures helps build a healthier gut, says Risavi, leading to improved digestion and overall health as gut microbes then can extract nutrients from food more efficiently. Trillions of these bacteria live within us, in what scientists call the gut microbiome, and in general, the more diversity you have in this internal population, the better the effects. Fermented products also work to keep body systems in balance, and more importantly, “keep people regular,” adds Risavi.

The entrepreneur first became intrigued by fermenting while working for the Heirloom Organics farm in Hollister, and as she learned more about Chinese medicine, realized that these types of foods are vital for optimal health.

Fermenting is a time-honored way to preserve foods for the winter season, but it also fits neatly into the TCM belief that all foods should be “cooked” in some fashion before entering the body. “It eases the burden on your digestive system,” says Risavi, pointing out that fermenting is a kind of pre-digestive process that also has the advantage of preserving all the nutrients in that food.

It’s also critical to use organic produce grown by farmers who put their hands into the soil and care about the land, she adds, explaining that this increases the chi, or life force, of the fruits and vegetables. “If you remove the human aspect from farming, there’s no love put into the food,” she says. “If it is done with love, the chi of the food increases.”

Her product line is so varied that it’s astonishing that Risavi does all this herself, along with two part-time helpers. “She is the hardestworking person I know,” says Gallagher, her business partner and father of their 3-year-old daughter Elsie.

When Risavi first started fermenting, she realized that the way that most people did it was not optimal for best results. Instead of using plastic or metal containers that can leach undesirable chemicals into her mixtures, she opts for glass crocks, and keeps them airtight for an anaerobic ferment—made without oxygen.

To preserve nutrients and probiotic bacteria, she makes sure that the cooking temperature never exceeds 68 degrees Fahrenheit, so that the culture remains live. Her products are also lighter in salt and sugar whenever possible.

Risavi does all processing in a facility she built out of a shipping container, at the ranch where she and Gallagher live and raise their daughter together. Although separated in their personal lives, Risavi says that they function beautifully as business partners and co-parents.

Becoming a parent re-defined what she’s doing with Wise Goat. “I’ve really gotten to know many of my customers personally,” says Risavi, with many of those devotees coming back week after week to farmers’ markets in San Francisco, Palo Alto and other Bay Area locations. “Since becoming a mother, I’ve put a special emphasis on mother and child health.”

Surprisingly, kids (including Elsie) are some of the biggest fans of her pungent and sour foods. “If you introduce those flavors first, that’s what they’ll prefer.”