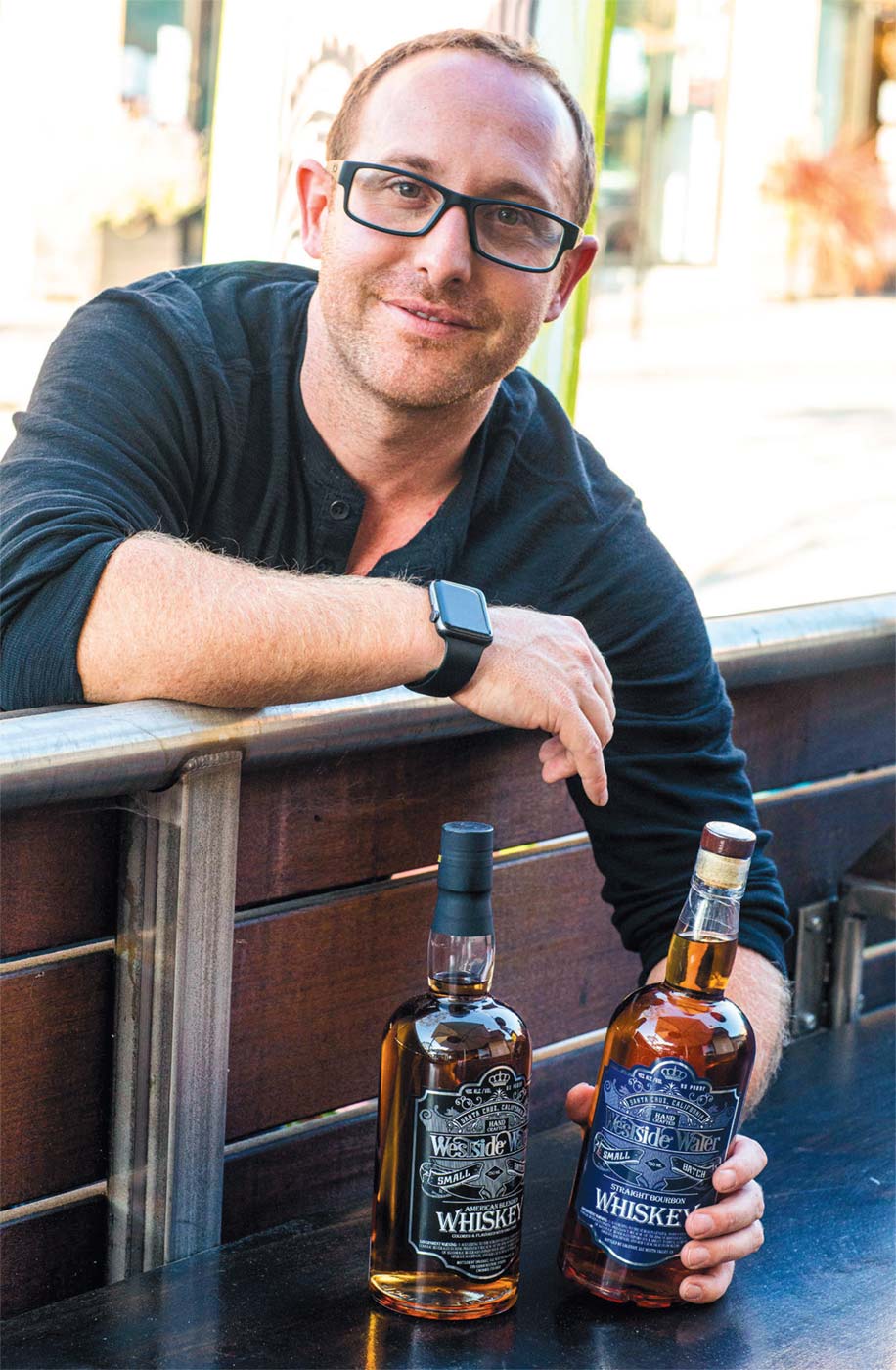 But that wasn’t the original plan. He started with an idea for an app to let consumers customize a spirit to their specs, craft a label and have it sent to their home. The app never happened; it turns out it’s illegal for producers to sell directly to anyone without a liquor license.

But what ultimately did emerge could disrupt the liquor industry—and has already revolutionized the spirits program for a range of restaurants in and around Santa Cruz.

Spagnola pivoted from people to places and started doing his rounds. Bar pros liked the idea of a customizable and branded bottle, but their complaints proved even more compelling. Good quality spirits are hard to find at a reasonable price. Certain minimums are required for delivery and/or discounts from distributors. Costs for things like shipping and tax can be hidden. And the games distributors play—requiring purchases of less desirable spirits in order to access nicer whiskey options, for instance—get old quickly.

“Every bar had their own horror story,” says Spagnola, now CEO of 2-year-old startup Ublendit Spirits. “It got me thinking, ‘Can we have a customer service experience that’s all about what the bars want?’”

That is what he and Ublendit have achieved. By slowly vetting all the options for the purest base spirits on the market, including super-proof ethanol, from big and experienced producers like J.B. Thome and Midwest Grain Products, or MGP, the Ublendit team has an affordable starting product, Spagnola explains.

By proofing down with hyper-distilled water, applying proprietary recipes and (potentially) barrel aging at their own distillery, they make it their own. By cutting out the middleman and working directly with restaurants and bars, they have been able to sidestep the chunky distributor markup and focus on client needs.

Today, partner businesses can taste and select from the dozens of gins, rums, whiskeys, vodkas and more in Ublendit’s portfolio, or create something unique, then design a label. Printing, graphic design, Alcohol and Tobacco Tax and Trade Bureau (TTB) approvals and legal consulting are included. Required purchase minimums are not.

Suddenly partners like Hula’s, Back Nine, Kianti’s and Britannia Arms are among those that have their own branded bottles. Barkeeps can rep their own stuff, businesses enjoy better margins and customers save a buck.

“Restaurants get something they can be proud of, and if they sell one drink, it pays for the bottle,” Spagnola says. “We don’t worry about a sales pitch, we drop off the product and prices, and let them taste. They feel like we’re on their side.”

Jason Cichon is bar manager at The Catalyst Club, an early adopter. He worked with Ublendit developers on a popular Catalyst Vodka with a light cucumber-kiwi-red clover flavor. “Hanging out in the lab coat designing liquor from the ground up is a playground for any bar manager,” he says. “They made the whole process very involved and fun.”

Ublendit’s first customer might be its biggest believer. After 47 years in the industry across 14 night clubs, personality-plus Chuck Oliver owns Number 1 Broadway in Los Gatos. In non-pandemic times, he reverses a timeworn bar tradition: He graduates clients from back-shelf bottles to his well brand, Chuck Oliver Vodka, using blind taste tests. (He stocks a total of six different Ublendit spirits under his own label.) Oliver estimates he’s done 200 three-way tests, versus Grey Goose and Tito’s, and his namesake has won 180 times.

“I’ve been in this business a long time,” he says. “It’s a no-brainer to have your own spirit.” So why hasn’t someone tried the Ublendit model before?

“Old-school guys say we can’t keep up, that we’re going to switch our model, that we can’t do so many different choices,” he says, “but if Amazon can have 2 trillion [products], we can have a couple thousand.”

“We were trying to make a product that was approachable and distinct— we were very intentional stylistically.”

Despite the worldwide—and ongoing— state of crisis for restaurant and bar businesses, Ublendit has been setting records, with 50,000 bottles shipped in July. The day I initially spoke with its team, they were buying the first of two 3,000-gallon stainless-steel holding tanks and an automated bottling line. A new facility is deep into the planning stages; it could potentially make Ublendit a 28,000-square-foot anchor tenant of a buzzedabout mixed use building in Scotts Valley.

Part of that growth is the evolution of Ublendit’s own brands, including Santa Cruz-inspired Westside Water whiskey. Like so many of Ublendit’s developments, it emerged from restaurant requests: Buyers wanted a blended whiskey that could compete with mainstream brands and save them cash. Ublendit’s development team, led by JP Ditkowsky and Tyler Derheim and informed by a lot of bartender taste tests, spent seven months tinkering with the formula.

“We were trying to make a product that was approachable and distinct—we were very intentional stylistically,” Ditkowsky says. “The final blend came together harmoniously.”

Ublendit’s first house brand, Hideout Vodka, got its start when Spagnola and his sales team approached Grocery Outlet about an exclusive product. While initially skeptical, immediate popularity—1,000 cases sold in two weeks—meant Grocery Outlet’s liquor buyer had a hit on their hands. Ublendit has since reached an agreement to add Hideout peach, mandarin orange, vanilla and raspberry vodkas (and to sell Hideout outside of GO, albeit always at a higher price).

At the start of the pandemic shelter-in-place orders, I noticed GO began stocking this new vodka with a grizzly on it for $6.99. My bunker’s bar didn’t have vodka, so I figured: What was there to lose?

Sure enough, it blew me away: A perfectly defensible, even above average, fifth of vodka, for a fraction of the price of inferior spirits. When I found out it was made locally, all the better.

In other words, Ublendit Spirits spoke for itself. Which is something a lot of people are starting to hear.