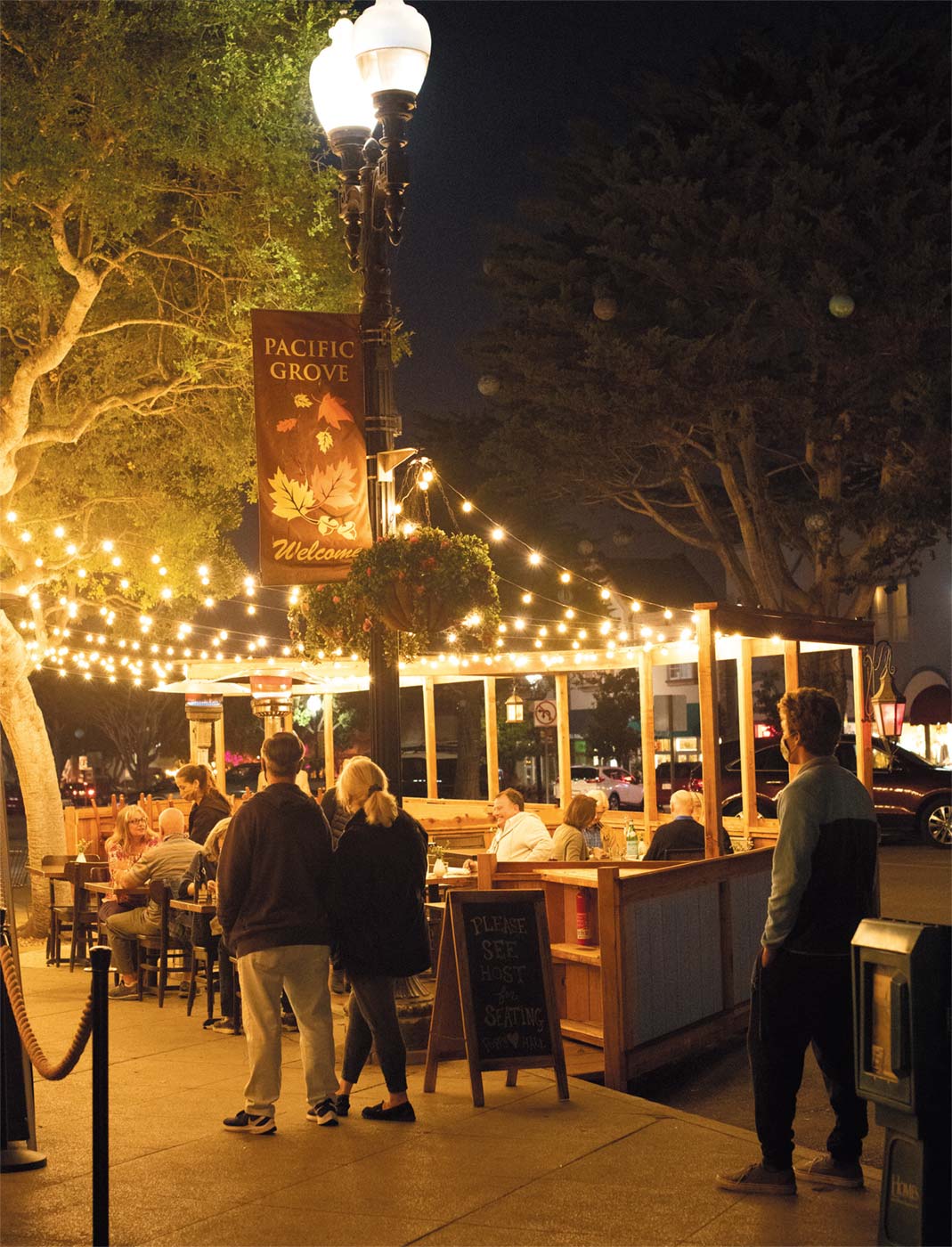 What will it take for restaurants to make it through these uncertain COVID times?

Business is good. That’s not a misprint.

That was one of the unanticipated takeaways that emerged as Edible Monterey Bay spoke with a swath of chefs and restaurant owners to learn what they’re doing and how they’re feeling as winter with COVID descends.

To be clear, business is only improving for a fraction of restaurants in the Monterey Bay area. Still, those success stories exist.

Some restaurant pros have closed restaurants, some have opened new spots and at least one has both closed and opened places. Some are cautiously optimistic, some are mad, some are bitter. Many are sad, plenty are scared and several are upset.

Every single one proved reflective. While they may not know where this crisis is taking the local industry, they are weighing why they do what they do more than ever.

Carolyn Rudolph, co-owner of Santa Cruz institution Charlie Hong Kong, is among them.

“Serving people healthy food is our spiritual practice,” she says. “When you’re under stress, you need healthy food.”

As this went to press, her chefs were scrambling their annual farmworker feed at Lakeside Organic Gardens—which supplies CHK a full ton of chard monthly—and unloading all the spicy Dan’s noodles with bok choy, cabbage, broccoli and coconut peanut sauce that the workers could want.

Since most of its business is takeout, its pricing easy on shrinking budgets and its patio welcoming for outdoor dining, Charlie Hong Kong was well-equipped to survive when COVID came crashing into town. But as important as its practical preparedness might’ve been, so too is its philosophical approach.

“It’s possible to view adversity as an opportunity,” Rudolph says, “to look at it with curiosity, [asking] ‘What’s happening here? What does this mean? What can we offer?’”

“We’re still doing what we love to do, only now it’s in people’s living rooms rather than our restaurant.”

The Pocket debuted in Carmel on one of the more difficult dates in modern history: March 19, 2020. After 15 long months of construction to overhaul the former Christopher’s—and after assembling a decorated team of restaurant lifers—chef/co-owner Federico Rusciano held a soft opening for his restaurant then abruptly had to close it. Even with eight decades of collective experience between co-owner Kent Ipsen and himself, Rusciano was caught flat-footed. He describes April and May as “sleepless.”

“There is really no comparison to any other scenario that Kent and I have witnessed before,” he says. “The most surreal thing was to see a dream fade away…and it was terrifying for a new business, considering the huge investment in the property.”

As soon as they were allowed to open for al fresco dining, they pounced on the opportunity with expanded hours, an all-day menu with reduced price points and spaced outdoor seating that added heaters, maximized the patio and captured street parking spaces. They’re currently adding an awning and a custom windscreen to make the patio more hospitable for winter, while building a seasonal menu with items like black truffle gnocchi and bucatini carbonara.

“We adapted quickly, and we’ve been lucky to be busy,” Rusciano says.

Owner-operator Ted Burke and crew at the Shadowbrook in Capitola are applying expanded hours themselves—it now opens at noon rather than 4pm—and embracing new technology (on top of constant sanitizing of the property and the iconic cable car that shuttles visitors down to the riverside destination). A new time clock scans employee hands and temperature when they punch in and flags any for bacteria or fevers. Loyal patrons remain a lifeline, but he’d love more leadership from Gov. Gavin Newsom. “He has color codes, but no metric and no goal to get back to normalcy,” Burke says.

“Restaurants and small businesses are basically left on their own to make decisions,” she says. “There’s not really a lot of guidance from the city, county or state, and certainly nothing from the federal government.” She considers retiring, daily, only to renew her enthusiasm by observing her staffers. “What this has brought home more than anything is how great the people are who work with me,” she says. “Many of my cooks have been with us for 15 years—that’s a long time in dog years, and longer in restaurant years. I want to stay here for them.”

Her number one request of government: grant restaurants some security by guaranteeing sidewalk and parking lot dining will be fee free and around long enough to merit the investment of enhancing the experience. San Francisco works as a model, as it’s done away with permit fees for outdoor café tables and chairs, parklets for outdoor dining and display merchandise for retailers through mid-April 2022.

“Small businesses have moved heaven and earth to survive this pandemic,” said San Francisco Supervisor Aaron Peskin, when his ordinance passed unanimously. “The city has done everything we can to accommodate small business while keeping transmission rates low.”

Chef-partner Ben Spungin has figured out a way to diagnose who’s really into Alta Bakery’s candied ginger scones and chocolate chip banana bread, runaway crowd favorites for the newish Old Monterey spot. “When they hear we’ve sold out and leave immediately,” he says. “That’s one way we know they love them.”

That enthusiasm applies to the wider restaurant, where the retailoriented, counter-service approach has kept Alta doing brisk commerce, with a boost from to-go dinners introduced quickly in response to COVID closures. Revenue records have been a monthly occurrence, per partner Kirk Probasco.

“What we do at Alta is really simple food, easy preparation, a nice job using fresh food,” Spungin says. “That’s what I think people want. They don’t want overdone or overly complex.”

That style will guide adjacent sister spot Cella, which is to open, with a bistro concept driven entirely by seasons, by the end of the year, with dinner six nights a week and Sunday brunch.

“We want it to be a neighborhood restaurant, super casual, featuring fresh foods and an ever-changing menu,” Spungin says. He envisions a few appetizers, a small raw section, limited entrées like a burger, a pasta, a chicken plate, a darker meat creation featuring duck, lamb or steak, and a fish dish, plus some sides.

Ample outdoor space built around the comely gardens at the Cooper Molera Adobe will remain crucial.

“I can’t stress enough how magical Cooper Molera is,” Probasco says. “There’s a reason John Cooper chose that property 200 years ago: The property chose him.”

Probasco adds that he’s concerned for restaurants without outdoor options and the industry in general.

“It’s intense, as well as scary-making,” he says. “Newsom is going to be pressured into opening more indoor dining in Monterey County sooner or later. Otherwise a lot of places will fail this winter.” Across the bay, Home restaurant is experiencing a similar boom thanks to circumstance, collaboration and outdoor dining.

“The space we have could not have been more suitable to the pandemic,” says chef/owner Brad Briske.

He has a point. With twothirds of an acre given to garden and patio, outdoor dining rules have made Home an inviting option, with tables 12 feet apart on the lawn, under citrus trees and alongside the chicken coop.

But the suitability extends to other aspects. Combining his wife/co-owner Linda Ritten’s background in farmers’ markets and his in whole-hog butchery, they’ve doubled down on pre-made market offerings like freshly extruded pastas, sausages, grass-fed beef bolognese and Fogline Farm chicken liver pâté. Buying in bulk and maximizing yield, it turns out, is good business. (They’re doing farmers’ markets in Downtown Santa Cruz on Wednesdays, Westside Santa Cruz on Saturdays and Live Oak on Sundays.)

“There’s profit there for us and customers get to buy things they’ve never been able to buy before,” Briske says.

With Briske managing all the restaurant ordering, kitchen duties and more, and his wife running the front of the house, they were able to scale tasks economically in ways operations with more overhead can’t. Kitchen staff has grown to support more butchery. Furniture donations from other restaurants, garden upgrades and chicken coop construction have all happened. Next up is a roof for the driveway that will allow a dramatic uptick in people served.

“I’m working more than I ever have, but it’s insane how much we’ve upgraded in the pandemic, how much it’s grown and how much better it’s gotten,” Briske says. “It’s not possible without restaurant people and those in our life who want us to succeed.”

At popular Poppy Hall in Pacific Grove, chef Phil Wojtowicz is doing his own reframing of the restaurant game.

“We’re still doing what we love to do, only now it’s in people’s living rooms rather than our restaurant,” he says. “Fun dining, not fine dining, has always been our thing.”

Much of that is built on the spiritual scaffolding Charlie Hong Kong’s Carolyn Rudolph described.

“This is our whole life,” Wojtowicz says. “We cook, we’re good with food. That’s the whole point. We’re not doing cartwheels because we’re making it [in tough times]. We are doing it because that’s what we do.”

“The most surreal thing was to see a dream fade away…and it was terrifying for a new business, considering the huge investment in the property.”

Other restaurants are using the slowdown to reimagine their identities; Cult Taco in downtown Monterey is going vegan, along with its coastal California-Oaxaca fare, Pearl Hour in New Monterey has blossomed into a coffee shop-tavern concept and longtime industry leader Dory Ford has taken the moment to rethink everything.

He closed his restaurant and mothballed his pioneering Aqua Terra private event outfit last February—before most of his peers realized what was about to happen.

“I used to work nights, weekends, holidays,” he says. “Now I don’t. I have an opportunity to really open my eyes. It’s a paradigm shift. [COVID- 19] has made a lot of people really re-think.”

After he abdicated Point Pinos Grill, the city of Pacific Grove published a request for fresh proposals to take over the space.

So she’s a poster business person for the WTF-is-happening, let’s-dothis, panic-inducing pandemic times. When asked how she’d sum up the last five months, her voice catches.

“It’s been really hard,” she says. “My team gives so much.” But her focus sweeps from the rearview to the road ahead, with plans for brunch, lunch and a 3–7pm happy hour at her new venture, The Grill at Point Pinos—borrowing from Crema hits, a “fun California yacht club feel,” and golfer-centric grab-and-go fare—along with new 7am coffee hours and community-building activities at Lucy’s, plus ambitions for P.G.’s upstart restaurant association to find new solutions to deal with the pandemic.

Which is encouraging. Because if there’s a solitary takeaway from the expanding months of tragedy and unraveling, it’s that we’ll need new solutions to keep appearing on the menu.