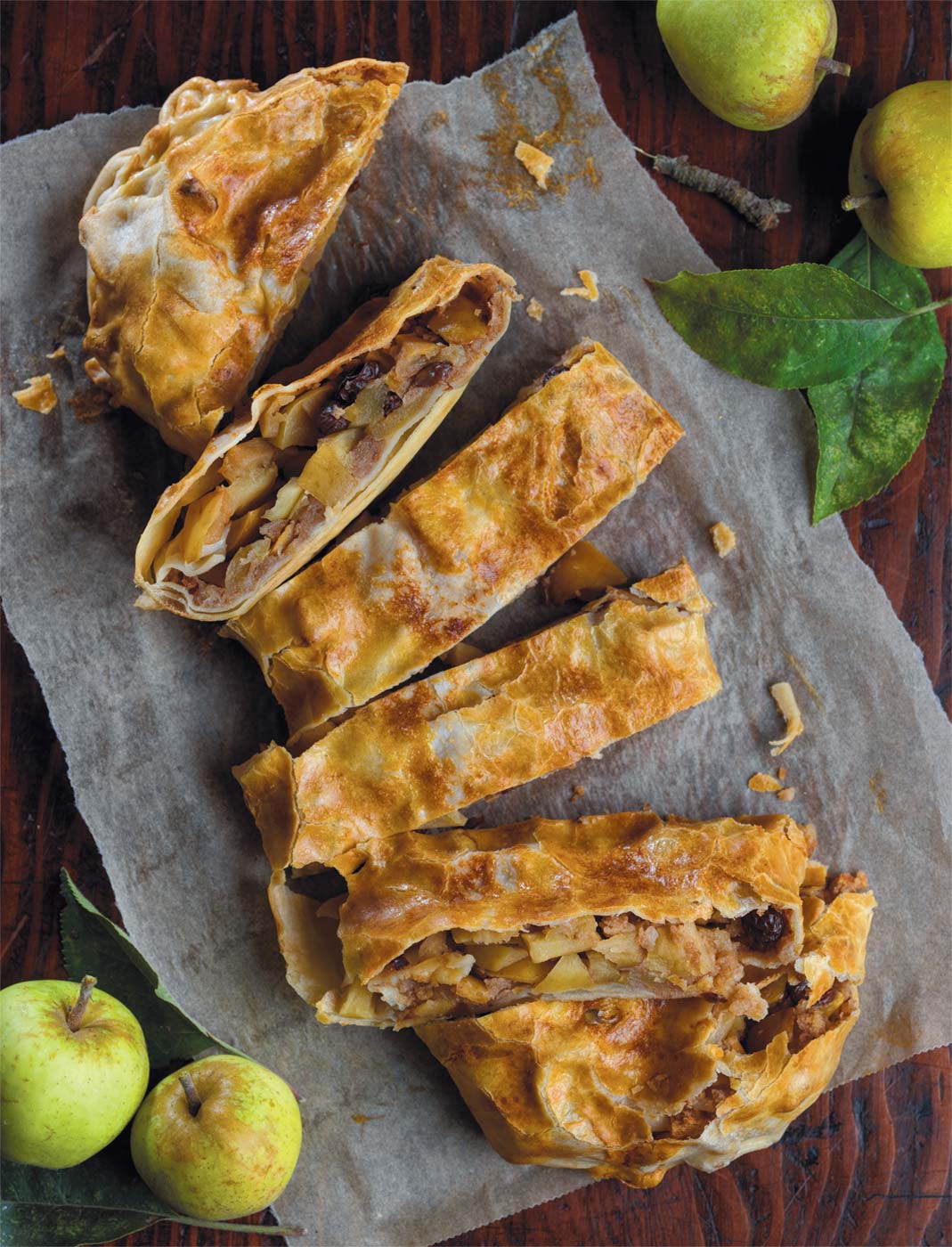 I had never seen anything like it before. Gramma Mutti cleaned the counter and told me I could look, but not touch. She poured the measured flour from a Pyrex glass into a perfectly shaped mound.

Next, she poured a liquid mixture of oil, vinegar and water into the indented surface on top of the mound, while with the other hand, using slow circular motions, bracelets jangling, she mixed until everything held together. After what seemed like an interminable wait, while she prepared the filling, she then tugged and pulled until this inert blob sprang to life and became a paper-thin rectangular “dough wrapping.” Gramma was making apple strudel. Watching her with my 7-year-old eyes was nothing short of mesmerizing. The spell had been cast.

Now 55 years later and looking back, it was a conjuring, a sacrament, an ancient ritual, connecting her past and my present. I did not know it at the time, but I had fallen hopelessly in love with baking forever.

Born in Vienna in 1901, Gramma Mutti, whose first name was Gretl, had a fabulous life. She was happily married to Oscar, who worked in a bank; they had one child, my mother Lotte. Her world was hiking, opera, theater and baking strudels, lemon cakes and chocolate tortes. They lasted longer if she locked them up in a glass case, so my mom remembers Gretl would “unlock” her a piece, which made it taste even better, and always served it mit schlagsahne, with whipped cream.

In 1939, their cozy Viennese life was shattered by news of curfews and relatives mysteriously disappearing. “No Jews Allowed” signs appeared at the town roller-skating rink and friends tried to escape on foot through the mountains.

A chance encounter with a man named Ho Feng-Shan changed the family’s life forever. This Chinese diplomat saved the lives of 20,000 Jews by stamping their visas for Shanghai, China. For the next 7½ years, Gretl, Oscar and Lotte lived in the Shanghai Jewish ghetto in a 12-by-20-foot apartment. Today those 20,000 refugees are known as The Shanghailanders or Shanghai Jews, but that is another story. Gretl and Lotte made it to America, but not before Oscar passed away from kidney cancer at a hospital in Shanghai.

From sweltering heat, cramped quarters and rickshaws to the glamorous world of palm trees, orange sunsets and Oldsmobiles, they landed in Los Angeles! My mom found a job at Metro Goldwyn Mayer studios as a German-speaking secretary and Gramma Mutti found work sewing for a Chinese clothing company, before ultimately moving to New York City to be near one of her sisters. There she got a job at Schrafft’s, the moderately priced restaurant chain selling sandwiches, soups and classic candies: Necco wafers, gumdrops, candy canes and fancy lollipops.

Summer visits to The Big Apple were a thrill for a California girl like me—a field trip to a matinee musical or a subway ride to a museum. But wherever we went, I always looked forward to returning to Gramma’s kitchen in apartment 6H. The interior was painted red, the Chinese symbol of prosperity and good health.

Gramma might be chopping parsley, patiently working a knife until it was just the right size to garnish her schnitzel, carp in gelatin or matzo ball soup. She never sat and always had an apron on. I sat in the sunlight coming through the kitchen window and was waited on completely.

Gramma Mutti never once talked about her early years in Vienna to me. It was all about asking me questions about my life and I, selfishly, could not wait to tell her about my latest accomplishments.

One of my favorites was the time I came up with the idea of making one fancy dessert every week. I went to my mom’s copy of Julia Child’s Mastering the Art of French Cooking and tried my hand at fancy stuff with fancy ingredients. Yep, I made Bûche de Noël, Croquembouche and Linzer Torte, but never ever the apple strudel. That was sacred ground, until now.

Mutti, I guess I saved the best for last. You never used a recipe when you made it. You needed only use your hands, heart, memory and the secret wish that one day you might pass it all on to me.

Anina Marcus is just now starting to understand how to make good bread after five years of scraping dried flour out from under her fingernails. She currently has 30 subscribers to her “bread-of-the-month club” and has a waiting list for those interested in joining as soon as there is an opening.