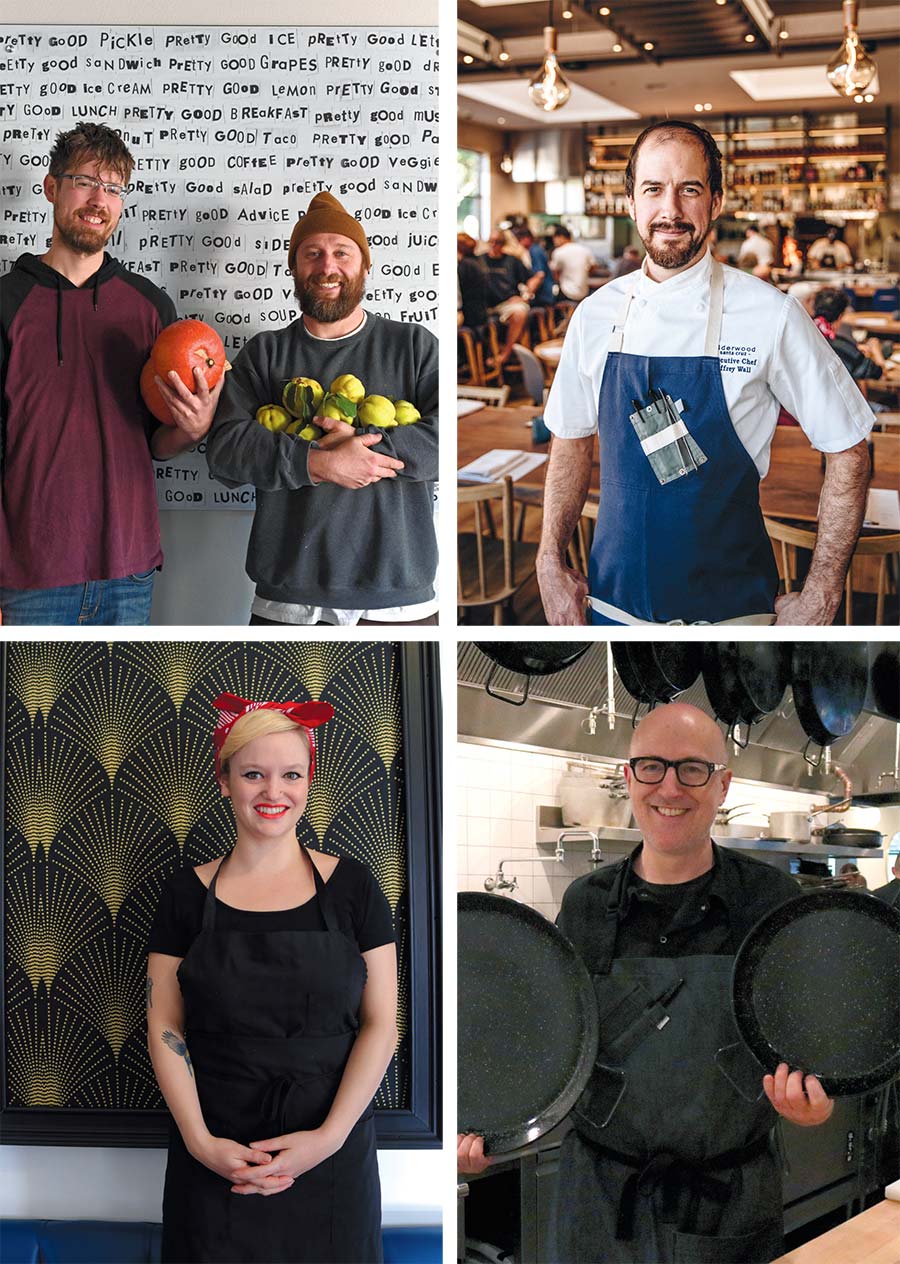 Sometimes the answer you seek is sitting right there, in front of your face, from the very start.

So it was on this odyssey to understand Santa Cruz’s current culinary soul.

One answer appeared on the counter at the first stop of many, Pretty Good Advice in Soquel, awaiting everyone who enters: organic goods as colorful as they were comely, including variegated pink lemons, pastel eggs from the restaurant’s farm, Concord grapes, blackberries, raspberries and three types of apples—green, albino Fuji and spitzenburg.

Pretty Good Advice chef/farm chief Matt McNamara and his team didn’t arrange the farmers’ market-like establishing shot because it looks pretty good and gets appetites going. (It does both.)

They just needed somewhere for all the plunder before it stars in all-vegetarian dishes like the best-selling black bean patty cheeseburger, arugula and apple salad, heirloom Hawks Havens bean chili and “Korean barbecue” sandwich with portobello mushrooms and kimchi.

“That just came about,” McNamara says. “We never had that as a plan. We just needed a place to put it.” But there was a bigger plan at work, one that reflects Santa Cruz’s foodie potential as a whole.

PGA came from a fine dining desire to offer the best product without the pomp, in Santa Cruz rather than San Francisco. South Bay born and raised, McNamara has staffed multiple Michelin starred spots in Europe (L’Arnsbourg of Baerenthal, France) and others that deserved the recognition (Dal Delicato of Naples, Italy). Back in the States he worked at celebrated Michelin-starred Eleven Madison Park then started Sons & Daughters, giving San Francisco an adored destination, earning a Michelin star and pioneering one of the city’s then-rare tasting menus.

It was an unqualified hit, but other elements were at play for McNamara and staff, including then-cook Tim Oegema, who now serves at PGA in a role McNamara describes alternatively as “backbone” or “the man,” line cooking, consulting on farm science, occasionally balancing books and growing a harvest of 250 pounds of mushrooms every month at the farm.

Element No. 1: Their buddies couldn’t cough up the $250- plus for a tasting menu and wine pairings, so they never got to eat McNamara and Oegema’s food. No. 2: They were deepening an affection for farming. McNamara—who in Europe would pocket produce discoveries for research and then procure his own seeds— started growing more of Sons & Daughters’ menu in Mom’s backyard.

When his family invested in an 83-acre property in the Santa Cruz Mountains near Summit Christmas Tree Farm in 2013, they sowed a new era for it. What was then an open expanse with a small orchard now boasts 250 varieties of fruit trees including 35 types of citrus, plus tropical plantings like pineapple, guava and passionfruit, among other treasures.

“We built the farm to have something that I could use at every point of the year. You roll with the property,” McNamara says.

As his life started moving away from Sons & Daughters, it started, as he says, “creeping into the mountains.”

“I love Sons & Daughters, fine dining, the artistic element and the steps of service, but when I started farming, I became obsessed with the ingredients,” he continues. “How can I make it where it’s just the food, just the ingredients? Pretty Good Advice is the closest thing.”

Gone are the linens, servers, carpet, fleets of wine glasses, animal proteins and steep bill. Instead of four chefs with precision tools plating roasted beets with cucumber yogurt, French curry, pickled mustard seeds and microgreens for a triple-digit tasting menu, now it’s a side of beets with similar dressings for $5, ordered from a counter and delivered to your table.

“I believe in local agriculture, I believe in community, I believe in incredible food,” McNamara says. “There’s no reason we can’t all eat it. High-quality ingredients are for fine dining only? It doesn’t have to be that way.”

There are other wider trends at work here—the ongoing rise of fast casual, the move away from meat, the exploding costs of running a restaurant in the Bay Area—but the two most central to Santa Cruz’s shifting food scene are most vivid: 1) the influx of San Francisco Bay Area chefs like McNamara and 2) their passion for the local produce like that covering the counter.

“We built the farm to have something that I could use at every point of the year. You roll with the property.”

Timing, someone once said, is everything. Five minutes before Alderwood opens on a recent Saturday, people are already gathering on the Walnut Avenue sidewalk. Ten minutes later, all the prime seats in Alderwood are full. Fortunately, there are a lot of good seats to go around, and a lot to see between what’s stirring in the immaculate bar and sizzling in the sleek kitchen, particularly from the “chef’s counter” spots directly adjacent to cooks throwing around Nakagawa filets and grilled swordfish.

The arrival of this wood-fired and seasonally driven spot in Santa Cruz was right on time too, as evidenced by the enthusiastic response chef-owner Jeffrey Wall banked on in relocating from award-winning, farm-fed Kimball House outside Atlanta, Ga.

“We want to become part of the fiber of Santa Cruz…we aim to be a hub for everyone,” he said when Alderwood opened at the tail end of 2018.

Nine months in, he adds this: “We felt like we could open a place that caters to people interested in good food, with technique and well-curated ingredients.”

General Manager Mike Falco echoes the sentiment. “The Santa Cruz restaurant scene is definitely progressing,” he says. “I feel like we have talent that’s spilling over from San Francisco and Los Gatos and San Jose. It does tie into the tech industry setting up shop here. That new influx is attracting new palates and people who are used to living in a place like San Francisco and are clamoring for that here.”

“That,” to be more specific, is big-city sophistication that doesn’t sacrifice easygoing atmosphere, fueled by things like a craft cocktail menu (including 11 signature elixirs), a raw bar (oyster options, caviar, king crab cocktail and more), and fun happy hour deals ($10 cheeseburger and beer).

“There can be a guy in a three-piece suit or a hoodie and flip-flops ordering 10 ounces of steak,” including $35-an-ounce A5 Japanese ribeye, Falco says. “It’s cool when it’s bustling and there’s that spectrum of diverse people.”

“It does tie into the tech industry setting up shop here. That new influx is attracting new palates and people who are used to living in a place like San Francisco and are clamoring for that here.”

Chef Jesikah Stolaroff, the architect behind the third stop on the odyssey, also migrated south to open a new place in Santa Cruz. But her movement was more circular than that of her peers. She grew up in Surf City—and loved its low-key and community-centric vibe—but realized she had to leave the area to evolve her craft.

“It’s a surf culture, it’s a student culture, but not a restaurant culture, though now it’s definitely trying,” she says. “People that really care about cooking and serving in restaurants, like me, go to San Francisco to learn under chefs, which means our area loses out on good staff and better restaurants.”

But, more and more, they are coming here, for at least one reason that sounds increasingly familiar: “The places I worked in San Francisco and Oakland were using Santa Cruz produce,” she says.

Her seemingly strange formula of French- Indian-Latino fusion, with a penchant for pastas and dynamite desserts, finds uncanny intuition via dishes like the hand-rolled fettuccine with chorizo and tomatillo sauce, tomato- and chile-braised chickpeas with hoja santa cashew cream, and sweet corn gnudi with padrón peppers and maitake mushrooms.

“Jess does a really good job of using familiar flavors in a new and interesting way,” Bienert says. “It’s comfort food that makes you think.”

The desserts could carry an eatery on their own—note the flourless triple chocolate tort and the sticky toffee pudding with poached pear, coconut cream, cinnamon and pepitas. They are a personal prerequisite for Stolaroff. “I love the celebration aspects that desserts have,” she says. “People get really excited and have extra joy you don’t get with other food. They bring a lot of happiness.”

She’s as obsessed with seasonal produce as are the other Santa Cruz upstarts. On EMB’s early autumn visit, she recommends the cheesecake—which proves levitating—because it’s the last chance for fresh raspberries.

Stolaroff says she came back home because she simply felt ready. “I wanted to cook my own food. I didn’t want to cook other people’s food anymore.”

Maybe it was because Santa Cruz was ready, too. Stolaroff doesn’t envision Vim or her hometown’s upgraded restaurant relevance as the end goal. Instead, it’s the beginning of something bigger.

“I’d love to build a better restaurant industry,” Stolaroff says. “It’s something we should build together.”

TOES IN THE SAND

The final restaurant of this new crop—and perhaps the most anticipated of the four—debuted in mid-October.

It gives downtown a splash of Old World Spanish flavor with a Santa Cruz accent.

Chef Brett Emerson, who owns Barceloneta with his wife and general manager Elan, formerly owned and operated Contigo in San Francisco for about a decade. Contigo shared much of the same Spanish strengths as Barceloneta—named for the swanky coastal neighborhood within Barcelona—and it also enjoys what Emerson calls “new toys” in the form of a wood-burning grill and Spanish churro fryer.

Twenty different tapas form the backbone of the menu, with flavors like chorizo and calamari in squid ink; lamb skewers with Moorish spices and cumin yogurt; and the best-selling golf ball-sized “bombas”—mashed potato balls stuffed with sausage then breaded and fried. Paella has been another crowd pleaser, done one of three ways, including vegan, traditional Valenciana with chicken, and seafood with sustainably raised Hawaiian shrimp, mussels, clams and squid. The attentive staff is also very enthusiastic about the house specialty churros.

The setting is contemporary and clean, with blond wood, woven light fixtures and beachy booth fabric; drinks are limited but wellcurated with Iberian-leaning elixirs like the Spanish Manhattan, passionfruit- powered Mallorca and 20 wines and vermouths imported from Spain.

The move south allows the Emersons’ daughter a place to grow up with her toes in the sand and her head in redwoods. And to be that much closer to produce like dry-farmed Early Girl tomatoes, which Brett is 100% crazy about and uses on Catalan-style pan con tomate that beats any I’ve tried in Spain, and in memorable gazpacho so dense it doesn’t need bread thickening.

“One of the reasons we moved down here is so many of the farms we would buy from were in the Watsonville-Santa Cruz-Salinas area,” he says. He ticks off three farmers’ markets he’s attended in the last few days, and smiles when he says he can get direct deliveries from sources that would’ve been impossible up north.

After four years of living in Santa Cruz, most of them spent commuting to Contigo in San Francisco, he and Elan are stoked on what’s happening here, and what’s coming next.

“We’ve seen a lot of changes,” he says. “I love seeing all these other restaurants blossom. I feel the whole quality of the food scene has increased. The produce has always been here, and we’re right on the Monterey Bay looking out at salmon, halibut, crab, sardines and squid, which I’ve always gotten from Monterey Bay.”

He pauses, then adds a final thought. “But now we’re right here, so it’s really fun,” he says. “I do feel like Santa Cruz is on the verge of becoming a great foodie mecca.”