Whether foraged, cultivated or homegrown, mushrooms are a passion for chef John Cox Poorly prepared mushrooms are a gastronomic tragedy. I still have nightmares of flaccid gray slices weeping a wretched slime onto whatever was unfortunate enough to lie beneath them. As a child, I would carefully sequester these toxic shards into one corner of the plate in order to avoid contaminating the rest of the dish. I grew up believing that I hated all mushrooms.

My relationship with mushrooms changed the first time I tried a Big Sur chanterelle; it was a revelation. A scruffy-looking forager in muddy hiking boots brought a basket of giant golden chanterelles to the back door of the kitchen of the Post Ranch Inn. The chanterelles were still damp from the morning rain and smelled of redwoods and oak leaves. Chef Craig von Foerster picked out a couple of small specimens and cooked them in a smoking pan with clarified butter and sea salt. After a few moments the chanterelles took on a rich chestnut color with a crisp exterior that gave way to a rich center scented by the ethereal flavors of the forest. I realized how delicious properly prepared mushrooms could be, and I began a career-long quest to learn all I could about foraging, growing and cooking mushrooms.

Technically called Agaricus bisporus, button mushrooms were the first cultivated mushrooms and have been grown in France since the late 1600s. It’s hard to imagine, but these are the descendants of rare wild mushrooms harvested in the forests around Paris for the king. One day a group of workers near the catacombs in Paris noticed a few “champignons de Paris” popping out of a pile of hay and manure inside the stable, likely from spores blown in from the forest or brought in by the horses. It is said that Monsieur Chambry, a farmer for the king, created a system for bringing piles of manure into underground quarries in order to cultivate mushrooms year-round. By the 1880s, when concrete and other building technologies had allowed cultivation to expand beyond the catacombs, there were more than 300 documented champignonnières throughout the city.

While the Parisian mushrooms may have been A. bisporus, they would have been closer in color to the mushrooms we refer to as crimini or portabella than the white-capped button mushrooms that are so popular in supermarkets today. The ivory-colored cultivated mushrooms we enjoy were discovered by chance in the mushroom beds of a Pennsylvania farmer in 1926. Over the last 90 years they have been selectively bred for their desirable pale color. A mass of gray oyster mushrooms from Far West Fungi. The largest producer is Monterey Mushrooms, a Watsonville-based company founded in 1971, with farms located in Royal Oaks, Texas, Illinois, Tennessee, Florida, Pennsylvania and Mexico. It produces more than 250 million pounds of mushrooms each year and employs some 4,000 people across the U.S. Like many growers, Monterey Mushrooms uses techniques grounded in tradition, sourcing used bedding hay from stables as a primary ingredient in its growing medium.

When executed properly, an astounding quantity of mushrooms can be grown in a small area. Monterey Mushrooms says it can grow 1 million pounds of mushrooms a year on just one acre of land. Not only are those yields impressive, they also take two natural byproducts, chicken manure and soiled hay, and turn them into not just mushrooms, but also a nutrient-rich mushroom compost highly sought after by farmers and gardeners.

A much smaller San Juan Bautista producer, Sumano’s Organic Mushrooms, is a local farmers’ market staple, selling at both the Aptos and Monterey Peninsula College markets. It specializes in shiitake and oyster mushrooms using completely organic production methods. Currently, the nationwide production of organic mushrooms represents roughly 10% of total U.S. production. Nevertheless, demand for organic mushrooms has been steadily increasing over the last decade and farms around the country are becoming more incentivized to adopt this approach.

Far West Fungi, with its flagship store in the San Francisco Ferry Building, is an emporium for all things mushroom, both wild and domestic. Despite its San Francisco address, the farm is located on Trafton Road in Moss Landing. The Garrone family began operating Far West Fungi in 1983 in the Hunters Point area of San Francisco. Initially, they focused on button mushrooms and supplies for growing mushrooms at home and they still sell mushroom kits for growing your own.

Now, with a 60,000-square-foot facility in Moss Landing and its acclaimed retail operation, the company focuses on a variety of cultivated mushrooms. The majority of its production is shiitake and it ships more than 10,000 pounds per week, followed by oyster mushrooms at 4,000 pounds. The most exciting element of the operation, however, is its selection of specialty mushrooms. Whether you browse its boxes of cultivated mushrooms at the Ferry Building, or are fortunate enough to go on one of its farm tours, you will see an incredible array of mushrooms bursting from the walls in a surreal spectrum of colors and shapes; reishi, which grows as hard as wood; lion’s mane, aptly named for its shaggy appearance; golden, pink and blue oyster mushrooms; and wood ear, which resembles a small, wrinkled ear.

In my quest to learn more about mushroom cultivation, I visited Branden Janikowski at his home and small mushroom farm outside Santa Maria. From the outside, the house doesn’t stand out from the rest of the suburban-feeling neighborhood. Even inside there is nothing particularly unusual, a rack filled with local wines and a nicely appointed living room and kitchen. It’s not until Janikowski leads me out the kitchen door and into what appears to be a converted sunroom that things start to get interesting.

He is clearly passionate about all things fungi and has personally built his own mushroom production facility from various bits of salvaged material found on Craigslist and around the community.

Janikowski starts his mushroom growing process with a mixture of wood pellets, similar to what you might use in a wood burning stove or cat litter box. The pellets are mixed with water in a cement mixer until they reach the right level of hydration. This growing medium, or substrate, is then loaded into another homemade machine that continues mixing the product while a pneumatic arm, operated by a foot pedal, dispenses perfect portions of pulp into the growing bags.

The filled bags are placed on rolling racks and steamed in the autoclave to create a hermetic environment before being loaded into the clean room, where they are inoculated with spawn for each variety of mushroom.

While the inoculated bags look at first as if they are filled with loose sawdust, that changes over the coming weeks on the incubation racks. Slowly the thread-like mycelium begins to develop, feeding off the substrate and creating a firm Styrofoam-like structure. Depending on the species, mushrooms can require anywhere from two weeks to three months to incubate.

Once the mycelium has taken over and the bags are firm, the mushroom will begin to “pin,” which is the stage wherein the fruit actually begins to emerge from the mycelium. The pinning bags are transported into the greenhouse where they are slit open and the warmer temperature and sunlight accelerate the fruiting.

A high-power humidifier sprays the greenhouse with mist every few minutes to maintain a high humidity. While there is a misconception that all mushrooms must be grown in the dark, and certainly were grown in dark caves in the 1700s, different species require varying light levels. Janikowski specializes in what he calls “tree mushrooms,” which typically require more light, including shiitake, oyster, lion’s mane and reishi.

In general, the fruiting mushrooms will double in size each day and are ready to be harvested within a week of pinning. Depending on the species, each block continues to fruit for several weeks before being turned into the compost pile. In our mushroom cave at The Bear and Star in Los Olivos, we easily grow enough to serve a range of fresh and unusual varieties in the restaurant year-round.

Just as Monsieur Chambry and the stable attendants literally stumbled on the first cultivation method for champignons de Paris, people continue to try and tame wild delicacies from the fungi world. From scientists cultivating chanterelles in Finland, to oak trees inoculated with truffles in Oregon, mycologists and mushroom lovers are eager to unlock the unique riddle of each species. How lucky we are to have access to this bounty of mushrooms in our own backyard—but only if we can cook them correctly! HOW TO USE LOCAL WILD AND CULTIVATED MUSHROOMS Button Mushrooms – Fresh local button mushrooms are nothing to turn your nose up at. For a quick easy appetizer, try the Casanova-inspired dish of an escargot-style mushroom. Simply remove the stems and invert the mushrooms to form a cup. Fill the mushrooms with butter, garlic, parsley and lemon juice then top with a touch of Parmesan and breadcrumbs. Cook in a 500° F oven until browned.

Shiitake – These have the most umami of all mushrooms and are great sliced thinly into a broth (such as miso soup) or sautéed. For a fun spin, add some freshly grated ginger, brown sugar and soy sauce then mount with a touch of butter. Soy-glazed shiitakes are delicious!

Candy Cap – One of the world’s rarest mushrooms, these intensely maple-flavored caps add an unexpected depth to ice cream, pancakes and other creative culinary applications.

Oyster Mushrooms – When available, buy the pink or yellow. They taste the same, but the colors will impress all your foodie friends. Oyster mushrooms love blue cheese. Try adding some reduced cream with leeks and Cambozola cheese (this combination was a Post Ranch classic).

Lion’s Mane – These mushrooms look like little furry pompoms and can sometimes be found at the farmers’ market. They are very porous and act like a sponge for flavor.

Porcini and King Bolete – These mushrooms love the foggy forests of Pebble Beach. They are similar to button mushrooms, but can be identified by their lack of traditional gills. They are some of the firmest mushrooms and when young, they are delicious shaved over dishes, used in salads or treated like ceviche as a replacement for fish.

Chanterelle – Not only are the chanterelles of the Central Coast one of the largest varieties of chanterelle in the world, they are also one of the most flavorful. These mushrooms are almost perfect on their own, but a touch of truffle butter takes them to another level.

Maitake – Also known as hen of the woods, these mushrooms have been shown to help control diabetes. They are delicious pan or deep fried although that might not be the optimal technique for maximizing their health benefits. 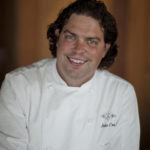