Fran and Sean Fitzharris at their brewery. Photo by Lynsie Larkin.

Brewery Twenty Five, just outside of San Juan Bautista, is a little hard to find. It sits on top of a steep hill behind the house of brewery owners Fran and Sean Fitzharris. This rugged spot is not the most ideal place for a brewery.

“It’s a fun story now, but we lost a keg rolling down the hill,” Fran says. “It just broke my heart at the time.” Then there’s the challenge of getting equipment into the brewery. “Getting these two fermenters up the hill was an adventure in itself,” says Sean, recalling the day that two 200-gallon stainless steel tanks were slowly eased up the narrow, winding road to the top. Delivery trucks carrying malted grain can’t negotiate the route at all, so they are forced to wait at the foot of the hill for one of the Fitzharrises to drive down and transfer the merchandise to their pickup truck.

But despite these challenges, Brewery Twenty Five has grown gradually since the couple started it four years ago, and the Fitzharrises are set to open their own taproom in downtown San Juan Bautista before the end of the year. The taproom will be the latest step in a 16-year beer journey for the couple— and the trip is gathering momentum.

In 2001, Sean had been working as a computer programmer for various startups in the San Jose area and brewing beer was nowhere on his radar screen.

“I wasn’t drinking very good beer at the time,” Sean says of those days. Then he met Fran, a craft beer enthusiast who collects growlers signed by legendary brewers the way sports fans collect autographed jerseys. Together, they began to explore craft beer. “A lot of our dates and trips revolved around going someplace for beer, and whenever we would travel, we’d ask ourselves what breweries would be along the way,” Sean says. They explored breweries up and down the West Coast, making new friends and absorbing the emerging beer culture at each stop. Sean started home brewing, beginning with simple beers before graduating to more complex concoctions. “I love cooking, I grew up cooking with my dad and grandmother and brewing is really cooking,” Sean says.

They also got to know many brewery owners in nearby Santa Cruz and wondered if maybe they should go into the beer business themselves. The Fitzharrises spent another three years doing research and slowly amassing equipment before opening their production brewery in January of 2015, naming it after the state highway running north-south through San Benito County. Sean is the brewer, working evenings and weekends as he continues to work as a programmer, while Fran handles the business’s day-to-day operations full time.

Thousands of homebrewers and craft beer enthusiasts have opened breweries all over the United States. But in this age of ready-made brewing equipment and crowdfunding, Brewery Twenty Five is a throwback to the earliest days of craft beer, when people like Sierra Nevada Brewing’s Ken Grossman used their own money to patch together breweries from discarded junk and used dairy equipment. The Fitzharrises’ seven-barrel brewing system (one beer barrel = 31 gallons) employs an old dairy tank found on Craigslist and a system of copper pipes with holes and slits added to extract fermentable sugars from the malted grain using hot water. Elsewhere in their brewing process, the Fitzharrises have plugged in used equipment purchased from nearby breweries. In the middle of everything are two large, shiny fermentation tanks named Thelma and Louise after the Fitzharrises’ two large Australian shepherds, who have passed away but continue to live in spirit within the brewery.

Then there was the time they found a walk-in refrigerator, normally costing $3,000–$4,000, on sale at a closed Morgan Hill mushroom farm for only $300. “When I read the ad, I thought it was a misprint,” Fran says. Visiting the farm, they were relieved to discover the price was no mistake. The bad news: They had to remove the large walk-in from the seller’s property that very day. “So we figured out how to take it apart, get it in the truck, and then got it up the hill and put it back together here,” explains Sean.

As for the beer, Brewery Twenty Five often infuses the flavors of the local community into its brews. Its Fuzzy Jules Apricot Wheat beer, named after a local second grade teacher, uses apricots sourced from Hollister’s B&R Farms. Normally brewed in the summer months, the light tartness from the apricots works well with underlying wheat beer to create a fresh, vibrant brew. For its Many Moons Stout, Brewery Twenty Five adds beans from San Juan Bautista’s cult coffeehouse, Vertigo Coffee Roasters, along with cocoa nibs and vanilla beans to create a highly complex, rich stout. A long-term project in the works is a sour wheat ale aged in chardonnay barrels from Hollister’s Leal Vineyards. Sometimes Sean ventures well beyond San Benito County for his inspirations, like when he added lemongrass and ai spices to his stout. Other times, he’ll add toasted coconut. Then there’s his Passion Fruit Wheat.

“Passion fruit is an interesting beast—it’s a very tart fruit,” says Sean, who adds it to a neutral wheat-based beer, allowing its tangy flavor to really shine. “A lot of folks really into sours love this beer,” Fran says.

Of course, any California brewery is virtually required to have an IPA. But Brewery Twenty Five’s Oatie Oats IPA, which utilizes flaked oats to add a creamy mouthfeel, and mosaic and Citra hops to contribute tropical and citrus flavors, is much more restrained and balanced than most West Coast IPAs. “It’s a very approachable IPA that’s more about the flavor and aroma than bitterness,” explains Sean.

All of this will be found in Brewery Twenty Five’s new taproom. The main room will feature a bar and will be decorated with local art, antiques and other objects. In the back, the Fitzharrises are planning a room that will chronicle their explorations of craft beer culture with pictures of Sean and Fran on their various travels, as well as Fran’s collection of autographed growlers and tap handles. Reflecting on her initial discovery of craft beer, Fran says, “I was super lucky back in the ’90s. I was around people who knew about good beer. I was that person telling everyone the stories about people like Ken Grossman.”

Now, with the opening of their San Juan Bautista taproom, Sean and Fran finally get to tell their piece of that story. 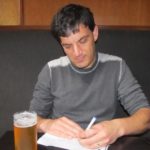