Despite the noise from a live band playing in the nearby Custom House Plaza, the thick adobe walls surrounding the Memory Garden behind the Pacific House make it tranquil. Large white arches create a dramatic frame for Spanish roses and bright yellow Echinacea flowers. Magnolia trees shade the expansive courtyard and cast shadows across a large central fountain. For the careful observer, these spaces offer a fascinating window into early life in the city.

Before this place became a garden in the late 1920s, it was a walled horse corral. On Sundays people would gather in the dusty courtyard and on upstairs balconies for their weekend entertainment. The bull and bear fights were a favorite of the entire town— women, children and men alike. A wild grizzly bear would be lassoed and brought to the corral where it would be tethered with rope to a large bull. After a while one of the frightened animals would become aggravated and attack.

The bull would charge and use its horns to come up from below, goring the grizzly. The bear would swipe its giant claws downward, slashing at the bull. Most of the time, unless someone intervened and shot the bear, it would pin the bull and rip out its tongue, killing it. It is alleged that a San Francisco merchant coined the terms “bull” and “bear” market after watching a bull and bear fight: He compared the rising market to the bull because of the animal’s tendency to attack upwards toward its opponent and vice versa.

Bull and bear fights were not the only questionable form of entertainment in the early 1800s in Monterey. Cock races were another popular pastime. Half a dozen men would mount their horses and race down the narrow street toward a rooster that had been well greased and then buried up to its neck in the dirt. The first rider to reach the unlucky bird and pull it from the earth was the winner. Often the rooster’s head would pull right off, leaving the rest of the bird behind.

By the 1850s, due largely to pressure from Christian missionaries, the bear and bull fights were stopped. The Christians are said to not have objected to the fighting itself, but considered it too much like work to be taking place on Sundays and holidays.

One of the most overlooked reminders of this area’s bloody past is the sidewalk in front of the Old Whaling Station. At first glance it appears to be made from worn stones, but a closer look reveals the ridges of carved bone. The entire walkway is made from blocks of whale vertebrae, a byproduct of the once booming Monterey whaling industry.

While the adobes are beautiful, and their thick earth walls create a quiet sanctuary inside, they may not have been constructed out of the most ideal building material for Monterey’s foggy coastal climate. During his time spent living at the French Hotel, Robert Louis Stevenson wrote:

“The houses were, for the most part, built of unbaked adobe brick, many of them old for so new a country, some of very elegant proportions, with low, spacious, shapely rooms, and walls so thick that the heat of summer never dried them to the heart. At the approach of the rainy season a deathly chill and a graveyard smell began to hang about the lower floors; and diseases of the chest are common and fatal among house-keeping people of either sex.”

Today the adobes celebrate a more peaceful side of old Monterey. Many of the city’s most beautiful gardens are hidden behind unassuming gates and ancient rock walls. Giant abalone shells line flowerbeds, mature fruit trees hang heavy with apples, persimmons and mission figs provide a glimpse of what early residents ate. Monterey State Historic Park encompasses 17 adobes, spread around downtown Monterey. These include many important cultural sights, one of which, The Custom House, long served as the primary trading port for California and was the site where the first American flag was raised to claim California in 1846.

Michael Green, interpretive program manager for Monterey State Historic Park, says that despite many locals passing the historic buildings on a daily basis, few seem to venture inside to explore their rich history or well-manicured gardens, and more than 85% of the park’s visitors are school groups and out-of-town visitors.

Several local businesses have found fitting homes inside the historic adobes. The Fremont Adobe, owned by the Monterey History and Art Association, is the perfect venue for Parker-Lusseau Pastries & Café. There is no better way to enjoy a crisp winter morning in Monterey than a fresh croissant and coffee on the bakery’s tiny patio. The Stokes Adobe, which long housed an eponymous restaurant, is now home to Restaurant 1833. (See story on p. 42.) Besides enjoying the restaurant’s acclaimed food and beverages, guests can see inside the thoughtfully restored building and learn about its colorful history.

Another historic property, the Cooper- Molera Adobe, is currently undergoing a transformation into a “shared-use” site. The 2-acre compound, which sits at the top of Alvarado Street, was once the home of John Cooper, a ship captain who travelled the world trading cow hides, sea otter pelts and tallow. Today the home is owned by the National Trust for Historic Preservation and has been leased to Monterey State Historic Park since 1972. Due in part to financial constraints, it appears that the lease will not be renewed when it ends in 2016. Over the last five years the National Trust has been working with the development group behind the adjacent Trader Joe’s center, Foothills Partners, on a financially viable alternative to the current model, which would maintain the property’s historic identity while further engaging the community.

Late last year the Monterey County Superior Court overturned a 42-year-old ban on the sale of food and beverages at the Cooper- Molera Adobe. Now, with unanimous support from Monterey’s Historic Preservation Commission, it appears that the project is well on its way to becoming a reality. Details are still vague, but it appears that a $6 million revitalization will include a restaurant space, housed in the Spear Warehouse, as well as an events space within the historic barns, which are unused due to seismic stability concerns.

Collaboration between historic groups and private business developers is becoming an increasingly popular model for preserving historic sites. Places like Cavallo Point, a renowned luxury hotel housed inside the historic presidio north of the Golden Gate Bridge in San Francisco, and Colonial Williamsburg, a town in Virginia that is now a living history museum complete with hotels and restaurants, demonstrate how this sort of development can serve both the buildings and the community as a whole.

The goal of these partnerships is often to preserve the educational tours that benefit school classes and history-minded visitors, while encouraging the public to enjoy and interact with the site. Besides supporting an important part of history, these models help the local economy by increasing commerce and creating local jobs.

In 2008, the National Trust declared California’s state parks and historic sites together to be one of America’s Eleven Most Endangered Historic Places. Without the support of our local community, these incredible places may literally soon become remnants of the past.

There is no better time to enjoy the historic adobes than in the winter! This year Christmas in the Adobes will take place on Dec. 11 and 12. It is an opportunity to visit 20 historic buildings around downtown Monterey. Each stop will offer guests an opportunity to learn about the history of the site and enjoy refreshments and live entertainment. Ticket proceeds will support youth education programs at Monterey State Historic Park. More information can be found at www.mshpa.org.

But fortunately, you don’t need to wait for a special event or new restaurant to enjoy the Monterey adobes. The best way is simply to walk and explore, following the yellow historic markers and venturing into hidden gardens and courtyards. Take a picnic and go at your own pace. You may take a cell phone-guided tour provided by Monterey State Historic Park by dialing 831.998.9458, punching in location numbers as you walk from site to site. You can also download a map from its website.

A CHEF’S GUIDE TO ENJOYING
THE MONTEREY ADOBES 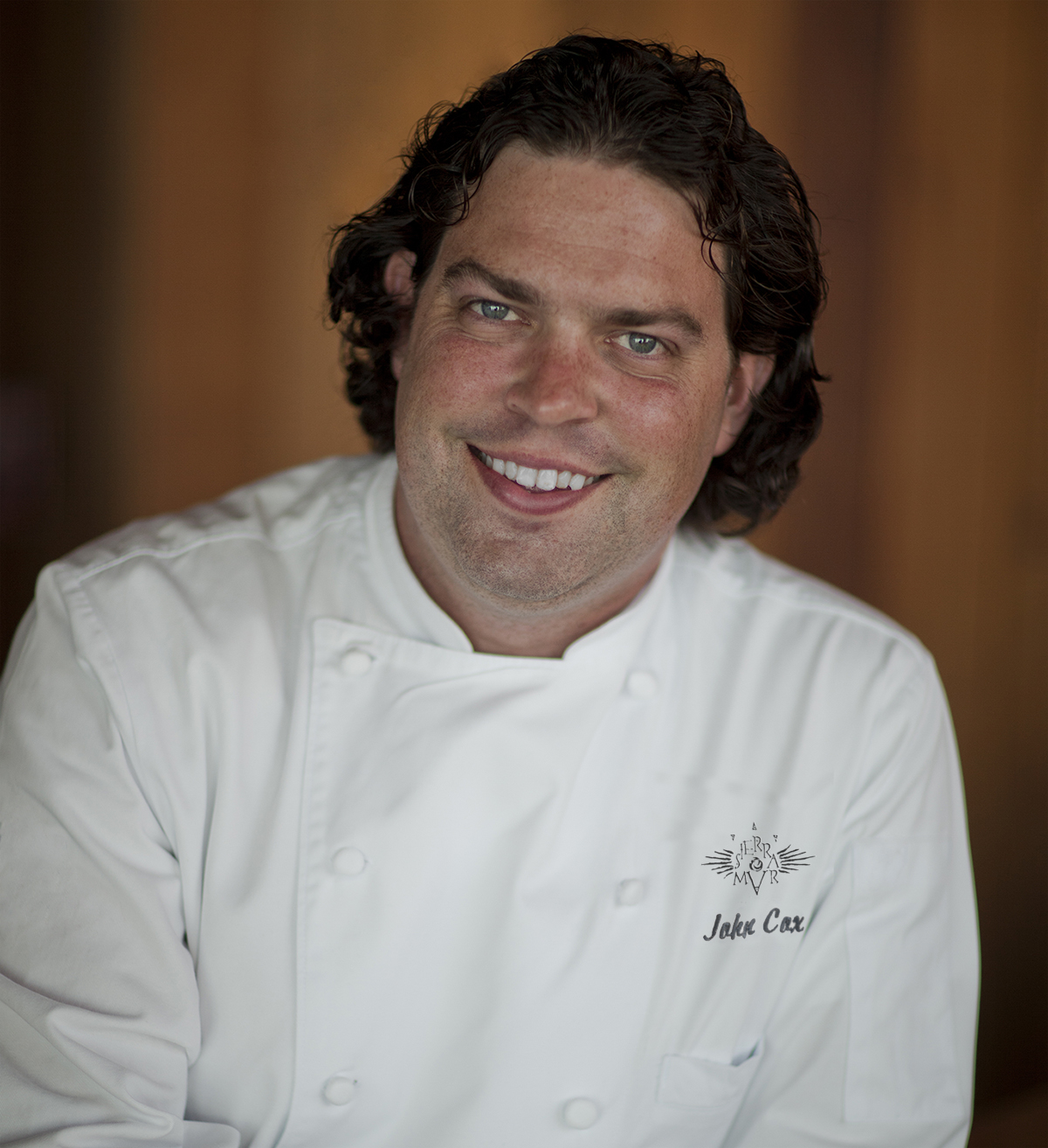