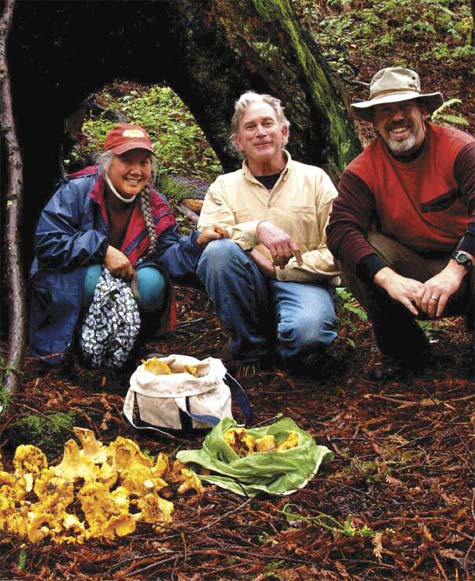 Chanterelles, Morels, and the hunters
and cooks who covet them

If people were divided according to their preference for summer or winter, I would definitely be a summer. Loads of outdoor activities fill my long, sunny summer days and make me happy, while our gray, wet winters here on the Central Coast tend to keep me inside by the fireplace, longing for summer. But this winter is going to be different. I’m joining the cult of the wild mushroom.

The oak-studded fields and damp forests of the Monterey Bay region are among the best places in the country to forage for wild mushrooms, and there are hundreds of wild mushroom hunters here. Some are scientists, some are foodies, some are nature lovers and others are just plain eccentric. But all the foragers I’ve met say the same thing: Foraging fills up the winter months, and it’s addictive.

“It’s like gold fever,” says bartender Mark Marron, who has been hunting mushrooms on the rugged Big Sur coast for 30 years.

“There’s a certain scent and then you zero in on one and then another and another.”

Marron says he looks forward to the rainy season and enjoys being outdoors when it is fresh and you can see raindrops glistening from the spider webs.

Fan-shaped chanterelles are one of the most delicious and popular mushrooms to hunt in Big Sur. They are also among the easiest to identify and they grow big there, sometimes topping one pound per mushroom. Chanterelles tend to grow around oak trees and start appearing in December throughout our area. The best time to find them is two or three weeks after a deep, soaking rain.

Marron sells chanterelles to local restaurants, like Mundaka in Carmel, and he uses them behind the bar of Big Sur’s Fernwood resort, where he keeps a shaker of chanterelle salt on hand for dusting the rim of glasses on his Bloody Marys. Occasionally he will mix a batch of chanterelle vodka, which he describes as “golden colored, silky textured and mushroom flavored.”

Up on the north coast of Santa Cruz County, 39-year-old surfer Jeff McCracken of Bonny Doon hunts mushrooms all winter to help support his family.

“I always go out in full camouflage looking like a ninja warrior,” he says. “It’s a real thrill to be living off the land.”

His most lucrative day came the spring after the Bonny Doon fire, when he and a friend headed into the burned out forest and collected five laundry baskets of morel mushrooms, which he sold to restaurants in the San Francisco area for $1,200. On an average day, he says he can make up to $800 for a few hours of foraging.

Morels flourish in burned out areas and places the soil has been disturbed, like plowed orchards or creek beds. They look somewhat like a sponge on a stalk and are also among the easiest to identify. But McCracken also forages for a dozen other varieties of wild mushrooms to sell to local restaurants, like Ristorante Avanti in Santa Cruz. He learned mushroom identification while growing up in Bolinas, from a well-known forager there who goes by the name “Eat Dog.”

People who forage for profit are indeed a rare breed. One of the most successful wild mushroom foragers in Santa Cruz declined to be interviewed for this article, saying he prefers to remain under the radar. And of course no professional forager will ever divulge his secret hunting spots. Mushroom gathering is banned in California State Parks, so the best places to go are on private property or in the Los Padres National Forest. For those interested in foraging as a hobby, there are plenty of great resources in our area.

Software engineer Mikey Cohen has been foraging wild mushrooms for fun since his college days at UCSC and teaches others how to identify edible fungi.

“It’s like Easter egg hunting for grown-ups,” he says of his class offered through Free Skool Santa Cruz.

“People have mycophobia or fear of wild mushrooms, but it’s not that complicated,” he claims. Of course, no one should eat a mushroom picked in the wild unless they are 100% sure it is not poisonous. And every mushroom hunter should learn to identify the toxic death cap mushrooms or amanita phalloides, which grow throughout our area. But with proper instruction and precautions, wild mushroom foraging is a great way to commune with nature. “It helps you connect with your local natural environment, with the weather and with the health of the forests and gives you a sense of place,” he says, adding that picking a mushroom is like picking a fruit and doesn’t harm the fungus living underground.

Cohen likes to forage for flavorful boletes, a category that includes the highly prized porcini or boletus edulismushrooms. In our area they grow near pine forests, especially the stands of Monterey pines in Carmel Valley, and start appearing around Thanksgiving. Sometimes it takes a little poking around in the lumpy piles of dead leaves called “shrumps,” and that’s what makes finding one such a treat.

Foragers often have a kind of mystical reverence for their mushroom quarry and some only go out on the days around the full moon, when fungi seem to pop out of their hiding places. Just looking at the odd shapes and colors of some mushrooms conjures up thoughts of forest gnomes and fairies. More vivid hallucinations are associated with eating certain types of mushrooms—a fact that has added to their magical allure.

Cohen suspects that wild mushrooms may also have aphrodisiac properties. He once took a woman mushroom foraging and then back to his place, where he expertly prepared a pot of creamy wild mushroom soup. That woman is now his wife.

“The idea of going out and gathering something in the wild is still in our bones from hundreds of thousands of years ago,” says Phil Carpenter, who heads the Santa Cruz-based Fungus Federation. The federation is a fun-loving, active group of more than 400 members, described as “people with above average intelligence and lots of eccentricities, who like eating, drinking and hiking.” Their motto: “When it rains, it spores.”

“We live in a perfect zone for mushrooms, not too hot, not too cold and with plenty of moisture,” says Carpenter.

Perhaps that’s why renowned naturalist and mushroom writer David Arora settled in Santa Cruz in the 1970s. He authored the encyclopedic book Mushrooms Demystified that identifies 2,000 species of mushrooms and is described by federation member Debra Johnson as “the alpha reference book for anybody on the West Coast.” He also wrote a pocket guide called All That the Rain Promises and More, and was one of the founders of the popular Santa Cruz Fungus Fair back in 1974—with the stated goal of putting the fun in fungus. A silly sense of humor is part of the fair and permeates the federation, which was originally formed to organize the Fungus Fair.

Now in its 38th year, the Fungus Fair will take over the Louden Nelson Community Center in Santa Cruz from January 13-15th, 2012 and it’s a must for wild mushroom lovers. (See “Explore” box on p. 29 for more information.) The fair includes an ambitious display room where hundreds of varieties of local mushrooms are identified and arrayed in their re-created woodland habitats. There are cooking demonstrations, tastings and lectures—including a session with David Arora, who now lives in Mendocino. There’s also a kids’ room, as well as mushroom arts and crafts.

The other great local mushroom event is the Big Sur Chanterelle Festival and Cook-Off, which takes place in February at the Big Sur Lodge in Julia Pfeiffer Burns State Park. It is the only event in the country dedicated to the beloved chanterelle and it brings together local foragers and chefs for a weekend of food, wine and friendly competition. Last year’s winners were Chefs Cal Stamenov and Ben Spungin of Bernardus Lodge in Carmel Valley. (See sidebar on p. 28.)

Carpenter recommends that beginning foragers start off slowly and concentrate on getting to know one or two species the first winter, for example, chanterelles and boletes. Novice foragers are encouraged to pair up with a knowledgeable partner or join a group, and identify all wild mushrooms before eating them.

Members of the Santa Cruz Fungus Federation get together throughout the winter for group forays that invariably end with lots of cooking and eating. In fact, this is quite a foodie group. At a recent monthly meeting, the potluck snack table was crowded with gourmet delicacies, such as a paté of porcini mushrooms, hazelnuts and caramelized onions; parsley and mushroom pesto; and homecured smoked salmon carted back from a fishing trip in Alaska.

Carpenter also offers one-day Mushroom Mania classes for beginning foragers at Garland Ranch in Carmel Valley in association with the Monterey Peninsula Regional Parks District. This winter, classes will be held on December 17th, January 21st and February 18th. Among the more unusual local fungi these groups sometimes find are: aromatic matsutake mushrooms, which tend to pop up around tanoak and madrone trees; the bleeding milkcap, which seeps red liquid when cut; and the maple-scented candy cap, which is often used in desserts.

This is a hobby that doesn’t require much special gear. About all that’s needed is a pair of waterproof boots, a warm jacket, a wicker basket, a field guide, and for the beginner, a companion who is experienced at mushroom identification. Once the mushrooms are collected and identified as edible, another skill set comes in handy.

As a general rule, slicing mushrooms thin helps the water cook out quickly and sautéing them with butter, cream or oil is best because fats intensify the mushroom flavor. Simple preparations of sautéed wild mushrooms on toast or mixed into scrambled eggs are a good way to start.

But veterans of the cult of the wild mushroom dehydrate much of their haul and cook with mushrooms throughout the year.

Just like I enjoy opening a jar of homegrown tomatoes on a chilly January night, I hope that by next summer I’ll have a big bag of dried, foraged mushrooms to cook with and fill my senses with happy winter memories.

Chef Cal Stamenov of Marinus at the acclaimed Bernadus Lodge in Carmel Valley says he was aiming to show off the bounty of our area when he invented the prize-winning recipe in last year’s Big Sur Chanterelle Cook-Off. The dish paired house-cured steelhead salmon roe from the Carmel River with golden chanterelles from Big Sur and curly spinach from the Salinas Valley. The result was Golden Chanterelles with Bloomsdale Spinach, Garlic Cream, Cured Steelhead Salmon Roe and Butter Croutons. Pastry chef Ben Spungin shared top honors with his Chanterelle and White Chocolate Mousse.

“We’re a mushroom restaurant,” says Chef Cal. “We use every variety of wild mushroom that we can get, including truffles.” For cool nights this winter, the chefs propose the following dishes:

1 thought on “WINTER FORAGING: THE CULT OF THE WILD MUSHROOM”