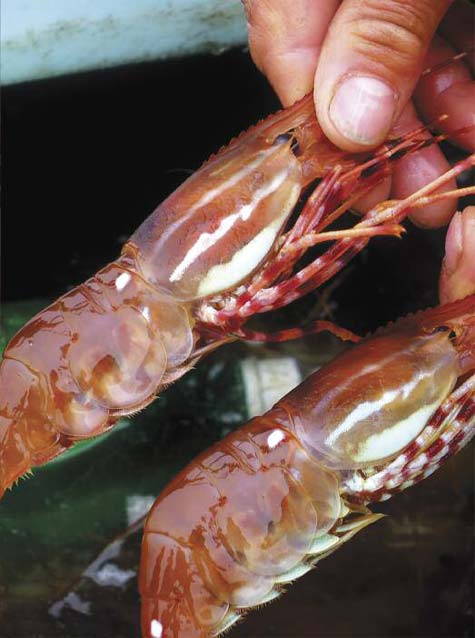 In pursuit of the prized “sweet shrimp”

STORY AND PHOTOGRAPHY BY JOHN COX

The scene is an unlikely last stop for one of Monterey’s most soughtafter ingredients: a nondescript, unassuming storefront tucked discreetly in the corner of a strip mall off Route 101 in San Jose.

But inside, gleaming, blood-red loins of tuna, armored bullets of sturgeon and dozens more enigmatic species are arrayed across displays of crushed ice. Below a counter, bubbling, aerated troughs are filled with geoducks, sea snails, scallops and clams of every shape and size. The walls of the shop are also lined with tanks containing live sea creatures. A tangle of yellow eel, what appear to be grouper with Betty Boop-like eyelashes, red rock cod and Maine lobster all swim languidly against an artificial current.

To someone who loves seafood, it’s a veritable treasure trove, but none is quite as alluring as the pink, sweet-fleshed Monterey Bay spot prawns displayed prominently in a huge tank next to the door. For almost 10 years, six days a week, a cargo truck festooned with colorful graffiti and the words “Asian Seafood” spelled out in small block letters on the side drives from this store in San Jose to the commercial wharf in Monterey.

And like clockwork, the Defense, a local prawning boat, and the truck converge beside Loulou’s restaurant.

The night’s catch, which has already been weighed on the boat and held live in a large blue tote filled with seawater, is lifted from the deck by crane and swung into the waiting cargo bay. The driver takes the entire catch and pays on the spot.

Sometimes other empty tanks are filled with ocean water so that more fish can be picked up at Moss Landing on the return trip. It’s a friendly transaction devoid of any haggling or negotiations; the driver often brings a bag of Bánh mì (Vietnamese sandwiches) and the fishermen will have a cup of fresh coffee waiting for him if they arrive at the dock first.

Once the prawns arrive in San Jose and are sold, most of them will be tossed in cornstarch and quickly fried, then enjoyed in their entirety—head, tail, shell and all.

Back on the wharf in Monterey, John Aliotti, captain of the Defense, exudes a level of energy and enthusiasm not expected from someone who’d gone to bed at 10 p.m. and then set off fishing at 2 a.m.—and repeats the schedule six days a week.

But Aliotti is passionate about his occupation. For him, fishing is more than a job; it’s a legacy that has been passed down through generations of his family, going back to when they first arrived from Sicily.

“You are allowed to fish with 300 pots within three miles of shore or 500 pots outside of three miles. We fish with about 120,” Aliotti says. “We are here to preserve the fishery, catch a little, pay the bills and make sure we protect it for the future.”

Aliotti and fishing partner Bill Rose set their pots 600 to 1,200 feet beneath the ocean’s surface in Carmel Canyon, just off of Point Lobos and the Highlands.

Trapping spot prawns is considered a sustainable, low environmental impact fishing method, and the pots themselves help protect the fishery. Each is assembled by hand with careful construction that enables prawns smaller than one inch to escape and reach maturity. A few years ago, Aliotti used to sell the majority of his catch to local restaurants.

But driving around the peninsula, selling prawns a few pounds at a time from a tank in the back of a pickup became an arduous task. Chefs would demand that all of the prawns be the same size or ask for just the prawns with roe sacks.

While a wholesale buyer like Asian Fish might pay slightly less, finding someone who could take his entire catch directly from the boat saves Aliotti countless hours of time and frustration.

Little substantial research has been done on the Pacific spot prawn population, but many Japanese chefs consider California spot prawns to be the best in the world. In Japan, they are called amaebi, which translates to “sweet shrimp,” and in fact, biologically speaking, spot prawns are not prawns at all, but shrimp.

Not surprisingly, the renowned reputation and limited availability of California spot prawns mean that they sell at premium prices. At Monterey Fish Co. on Wharf Two in Monterey, for example, just-caught prawns cost $18 per pound; after a day, the price drops to $15.

The local spot prawn fishery originated in the 1930s when prawns were inadvertently caught in octopus traps set in Monterey Bay. Since then, the fishery has expanded up and down the coast, with the majority of spot prawns now caught in Southern California. In 2003, the California Fish and Game Commission banned the practice of trawling for prawns, citing concerns about damage to the sea floor and high bycatch, which refers to the unintended destruction of other sea creatures caught in the nets.

Currently there are 22 active prawn-trapping permits in California, most of which are located in the southern part of the state.

Like real estate, these permits are often passed down from generation to generation and are extremely difficult to obtain. In Monterey, the Aliotti family has been prawning for generations. On the rare occasion that a permit becomes available, it can be costly. One was recently on the market in Southern California for well over a quarter million dollars.

Because the number of commercial licenses is limited and often they are affiliated, fishermen can help keep prices strong by limiting their overall catch, and that ultimately helps the prawn population and the sustainability of the fishery.

But even with a permit that has been passed down for generations and the price stability the permit system provides, fishing for prawns is expensive.

For starters, each prawn pot costs $60, a week’s supply of fuel can easily exceed $2,000 and insurance is about $1,000 a month. As most captains know, BOAT might as well stand for Break Out Another Thousand.

As a result, Aliotti says, trapping spot prawns will never make you rich, but it provides him with a living doing something that he enjoys. And in the summer, when the local spot prawn season is closed, Aliotti supplements that living by heading to Alaska to fish for King Salmon.

If you want to try local spot prawns, one of your best bets is at Monterey Fish as the store receives small shipments of live prawns on most mornings. Timing is critical because it’s not uncommon for the prawns to sell out within minutes of being put on display. When you do find spot prawns, you want to pick out ones that are still kicking and iridescent.

As soon as the prawn dies, enzymes from the head are released, turning the prawn a dull gray or black and spoiling the meat. When alive, the prawn meat is firm and sweet. But within a few hours of dying the meat becomes mushy and slightly bitter.

Fresh spot prawns require little in the way of preparation, so don’t be intimidated to pick up a pound and quickly sauté them with butter and garlic—or for the true prawn aficionado, simply peel and eat them raw!

The most important part of working with local prawns is keeping them alive. I have found the best method is to lay them in a shallow pan layered with damp towels or fresh kelp. (If you buy them at Monterey Fish on the commercial wharf in Monterey, you can pick up some kelp from the Abalone Farm next door.) It is best to clean the prawns immediately before you cook them to optimize the flavor and texture.