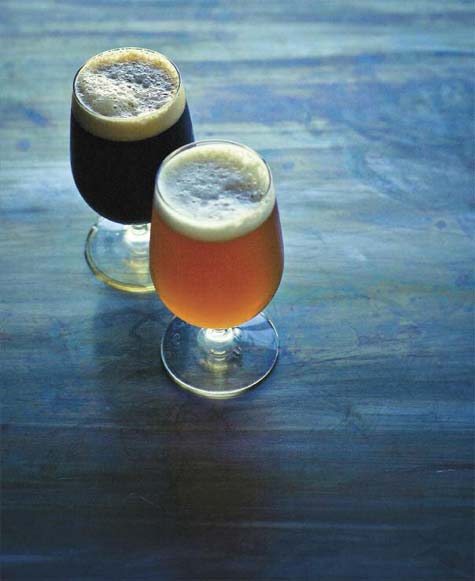 Central Coast Beer Comes Into Its Own

John Benedetti started homebrewing years before he launched Sante Arcangeli Family Wines, but he believes that understanding wine made his beer better.

“You start to notice nuances,” he says. “It makes you more perceptive to aromas, perceptive to layering on the palate. It’s fun.”

Benedetti began blending his two talents by aging India pale ales (IPAs) in old wine barrels and sharing his beers while processing harvested grapes. In 2010, when he met Tim Clifford of the Santa Cruz homebrew supply store Seven Bridges Cooperative, the two developed a friendship over discussions of Belgian beers and barrelaging techniques. A year later, they decided to start their own brewery.

Benedetti says the brewery takes a classic old-school-meetsnew- school approach to its lineup, which includes sours, saisons and IPAs.

“With our IPAs, for example, we tend to build pretty lean, hoppy IPAs that focus more on aroma than absolute bitterness,” he explains.

“I’m a big fan of [the yeast strain] Brettanomyces,” adds Clifford, who is particularly proud of the pair’s Belgian-style releases. “It lends all kinds of wonderful aromas and odd flavors to beer, and brings out a lot of unique nuances.”

The fact that the Sante Adairius owners prefer to call themselves “fermentation facilitators” rather than brewers speaks to their brewing philosophy.

“My approach to making beer is to stay relaxed and let the beer evolve as it wants to,” Clifford says. “I think beers are alive. Much like people, they all have different personalities and it’s very difficult to make something that’s alive conform to your wishes…I give the beer a chance to kind of come out on its own, which in some respects is very wine like.”

As craft beer continues to expand, California breweries are cropping up in many of the same communities where wineries have already established themselves.

“I think you’re going to see a lot more local, smaller producers who are able to tap into their local markets. It’s kind of a throwback to the way it used to be, when every city had several little breweries,” says Clifford.

He and Benedetti are part of a larger movement that’s been brewing in recent years. Just as consumers are increasingly hungry for locally grown foods, so have they been thirsting for local, independent breweries that offer more variety and character than big brands.

Nationwide, craft beer sales jumped 15 percent in the first half of 2011 alone, and the U.S. now boasts 1,790 breweries. That’s the highest number since 1900, according to the Colorado-based Brewers Association, and up from fewer than 100 breweries just 30 years ago. Another 725 are in the planning stages, which is nearly double the number planned last year at this time.

While other area outlets feature extensive menus—Monterey’s Cannery Row Brewing Company pours from 73 taps, for example, and 99 Bottles in Santa Cruz carries an impressive draft and bottle selection—Post No Bills is unique in that customers can sample beers and then purchase their favorites to take home. With the shop’s emphasis on new releases and hard-to-find beers, guests frequently discover new styles.

“The fun thing is, I don’t have a menu. I don’t have to keep a certain type of beer stocked,” Tye says. “I can keep my case fresh and exciting, changing with the seasons and with different new brews available in the area.”

For years, only a few Central Coast standouts provided options for local beer connoisseurs. In Marina, English Ales has long turned out its pale ale, IPA, ambers and others, while Santa Cruz Mountain Brewery and Boulder Creek Brewing Company filled taps up north.

“We’d like Monterey to be a beer destination,” he says. “We know the area has good wine—it’s had great wine for a long time— and we’d like to include beer lovers in the people who come to visit.”

People are starting to recognize that the greater Monterey Bay area offers more than wine and golf, agrees Merideth Canham-Nelson, who writes about beer travel with her husband, Chris, at The- BeerGeek.com. She first saw the region’s brewing community come together during the inaugural San Francisco Beer Week in 2009, when events extended south to Santa Cruz.

“In the broader beer community, we’ve been seen as a non-entity. It kind of skipped from the Bay Area down to San Luis Obispo,” she says. “More recently, with things like Post No Bills opening and Peter B’s getting a new brewer, I think we’re starting to be up-andcoming.”

Canham-Nelson also credits places such as Trailside Café in Monterey and Carmel Valley’s Toast for the recent boost in craft beer visibility, as well as a “current wave of new breweries in Santa Cruz that are doing a phenomenal job.” Several are part of a fledgling brewer’s guild comprised of professionals from the Santa Cruz, Monterey and San Jose areas.

“We have a wonderful community of brewers here,” says Kevin Clark, head brewer at Peter B’s Brewpub in Monterey. “We meet once a month and we all bring beers, usually seasonals or something we’re proud of, and we talk about what’s coming up next…We’re really starting to come together.”

The Sante Adairius’ business partners view brewers at Seabright Brewery, Uncommon Brewers and other local operations as both mentors and friends. As the region develops its own craft beer personality, Benedetti thinks that the sense of community and cooperation will distinguish it from hop-loving neighbors to the south and more established northern breweries.

“I see the Central Coast, geographically and philosophically, as the meeting point between two styles. We can bring tradition from the Pacific Northwest and that San Diego style—and some East Coast kinds of things—as influences for our beers,” he says. “Santa Cruz is known for being a free-spirited sort of place where a lot of ideas come together and diversity exists…I see the beer world here being similar to that.”

The following Central Coast businesses are solely devoted to providing supplies and support to budding brewers. And don’t forget more diversified stores that cater to the DIY set, like Ben Lomond’s Mountain Feed and Farm Supply, which is building up its own homebrew expertise and inventory.

From left: Paul Tye behind the taps at his Post No Bills and the owners of Sante Adairius in their new taproom: Melanie and John Benedetti, Adair Paterno and Tim Clifford.

Kevin Clark worked with wine at Pacific Grove’s Passionfish before gravitating to beer, and eventually traded his five-gallon homebrewing kit for a full-time position at Peter B’s Brewpub in the Portola Hotel & Spa. After his promotion to head brewer this summer, Clark shook up the Monterey establishment by changing yeast strains, revamping recipes and releasing a new tap menu that features fresh seasonals and English-style ales on cask. He’s also implemented a monthly beer dinner series that pairs pints with dishes by hotel chef Jason Giles, and in October he invited regional brewers to pour at the first-ever Monterey Beer Garden event.

Clark’s enthusiasm for the craft shines as he discusses flavor profiles, aromas and stylistic details.

“If you’re going to be a brewer, you definitely have to have a passion for it,” he says. “I’m just having a lot of fun.”

Next spring, Clark will launch a new hops program in partnership with Rancho Cielo, a Salinas educational facility for at-risk youth. Students will plant and care for cascade rhizomes, and after harvest, Clark will incorporate the fresh, local hops into his ales.

After Luke Taylor’s initial permit application for a southern Santa Cruz County brewery was denied, he learned zoning rules would allow a winery to open in the same space. So, he went back to officials with a full set of reports and plans and made his argument again. Corralitos Brewing Company received approval this fall.

Taylor and business partner Mike Smith are aiming to open their brewery and tasting room off Freedom Boulevard in early 2012. The label will launch an American IPA, an American-style pale ale, an oatmeal stout and a hop-forward red ale. Guests will be able to sample beers and purchase growlers on site, and several Santa Cruz County restaurants will serve selections as well.

Taylor and Smith grow about a dozen hop varieties near the brewery building and in the area, and they’ll use those in harvest beers due to be released as they open their facility.

The numerous wine tasting rooms located in Carmel Valley are sure to find themselves in stiff competition for customers on sunny afternoons after an open air beer garden featuring local craft beers opens there in 2012.

The beer garden, to be located behind a beautiful flowering vine-covered wrought iron gate in the heart of Carmel Valley Village, will be an offshoot of Lokal, a new high-concept—yet laid back and well-priced—restaurant that as of press time was set to open down the block in December. Customers of the Cachagua General Store will recognize the talented hand of chef Brendan Jones, son of CGS chef Michael Jones.

The name, Czech slang for local, is a reference to both Prague, where Brendan Jones and business partner Matthew Zolan owned their first bar together, and to their commitment to sourcing what they serve locally.

Lokal is not setting out to become a craft brewer itself, but it plans to commission Carmel Valley Brewing to produce a private-label, Czech-style pilsner to serve on tap in both the restaurant and beer garden. Additionally, it will pour two of Carmel Valley Brewing’s own labels, and two from Monterey Coast Brewing Company of Salinas. The one import they’ll serve is, fittingly, the Czech Pilsner Urquell.