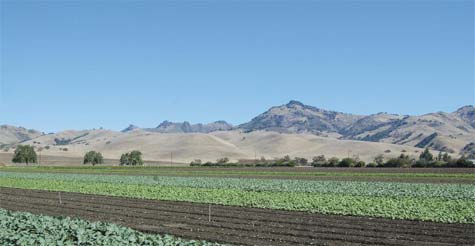 Phil and Katherine Foster and their company,
Pinnacle Organically Grown Produce, use organic methods to farm
250 acres in San Benito County. The ranch below is in Hollister.

Help could be on its way
for Monterey Bay growers

The 2012 Farm Bill—the massive piece of Congressional legislation that sets government agricultural policy for the upcoming five years— could have a big impact on the Monterey Bay region. Farmers, legislators and others in our area who’ve been following it are hopeful that it will deliver more assistance to the fruit and vegetable growers concentrated here, especially those who use organic methods.

The last Farm Bill carried a $60 billion annual price tag, with two-thirds of the money dedicated to nutrition programs like food stamps (now called SNAP) and school lunches. The remainder has gone to farmer assistance programs, including more than $8 billion a year in controversial direct payments or subsidies to those who grow certain crops—mainly wheat, soybeans, rice, cotton and corn. Corn subsidies are especially contentious as prices hit record highs this year and most of the crop is used for cattle feed, ethanol or, even worse, high-fructose corn syrup.

Central Coast Congressman Sam Farr (D-Carmel), the ranking Democrat on the powerful Appropriations Agriculture Subcommittee, explains that commodity subsidies were enacted during the Great Depression as a way of protecting Midwestern farmers from nefarious silo operators who would stockpile grain and try to control the market. It was also intended to ensure that farmers continued to grow food as a national security measure to avert food shortages. Fast forward 80 years and the subsidies seem out of sync with current priorities.

“Although our agriculture policy is still dominated by commodity subsidies, our nutrition policy is trying to get people to eat healthy foods and get a decent amount of exercise,” says Farr. Here in California, subsidies go to growers of cotton ($198 million in 2009) and rice ($73 million in 2009), while growers of healthy fruits and vegetables get nothing.

“In the last Farm Bill we were able to put more money into organic and specialty crops,” says Farr. “They don’t want to be subsidized. They wanted to have more money for basic research and more money for market promotion, which the traditional crops all get. They just wanted to be on a par with traditional agriculture.” Many Central Coast farmers benefit from an array of small USDA programs including Conservation grants, Beginning Farmers and Ranchers assistance and National Organic Certification Cost- Sharing, which pays up to 75% of the cost of the certification process.

For example, Freewheelin’ Farm of Santa Cruz received $10,000 in matching USDA funds as an “Individual Development” grant. The money allowed it to buy a tractor and expand production from one-half acre to seven acres, employing three full-time and two parttime workers.

“Dollar for dollar, in terms of job creation and support for small farms, you can’t get much better than that,” says Owner Amy Courtney.

At Serendipity Farms in Carmel Valley, owner Jamie Collins was one of 15 volunteers who went to Washington, D.C. this year to help the USDA review applications for the Beginning Farmer and Rancher program.

“When I started farming in 2001, I didn’t feel there was much help or technical support. I saw so many producers go out of business because it is very difficult to get into good markets and get loans,” she says. “All the government programs are set up for big producers, and they don’t know how to deal with small farms.”

With Washington obsessed over deficit spending and budget cuts, some people see the Farm Bill 2012 as a chance to break with tradition and put U.S. agricultural policy on a more sustainable path.

“Traditional agriculture consumes a lot of natural resources and can have a negative effect on the environment by polluting the water and soil and the air, all of which cost money to clean up,” says Susan Prolman, executive director of the National Sustainable Agriculture Coalition (NSAC).

“If government has a limited amount of money, wouldn’t it make more sense to provide incentives for good behavior and reward those who are doing a good job by not polluting?” she asks. That may be true, but the House of Representatives recently slashed more than $1 billion from annual conservation spending, some of it mandated in the last Farm Bill.

“They already massacred our budget, and there’s a real threat of more cuts when the new Farm Bill 2012 is drafted,” says Prolman. “Cuts should be done in a thoughtful manner, so you don’t eliminate the most helpful programs first and the most destructive last.” So rather than moving forward, efforts are underway to protect gains that were made in the last Farm Bill.

“Everything is on the chopping block, everybody’s facing budget cuts. We just want those cuts to be fair,” agrees Maureen Wilmot, who heads the Organic Farming Research Foundation, which has its national headquarters in Santa Cruz.

Wilmot says organic agriculture—with $29 billion in annual revenues—represents only 4% of the total food economy and is a small piece of the pie. But she points out that organic is a rapidly expanding sector—it grew 8% in 2010, in the middle of a big recession. Supporters of sustainable agriculture and organic farming are up against one of the most entrenched, powerful lobbies in the nation. But it looks like the urgency to cut spending may finally lead to the elimination of the controversial direct payments to commodity farmers. Even President Obama has come out in favor of ending these subsidies.

Exactly which programs will be cut and which ones will continue to receive funding will be decided in connection with cuts being worked on by the Congressional Super Committee on national debt reduction. Hearings have already been held on Capitol Hill and around the country, including one in Fresno.

“Essentially the whole nutritional movement, including Edible Monterey Bay and all the Edibles, is new to government and we’re up against one of the oldest programs the government has—supporting traditional agriculture—so it is very difficult to shift money,”
says Congressman Farr.

Voting on the new Farm Bill should take place sometime next year, although Washington insiders say it may be delayed until after the November 2012 elections so legislators don’t have to take positions on politically sensitive issues.

Farr’s advice is to get involved. Sign up for action alerts on the NSAC website (www.sustainableagriculture.net). And get people in your social networks involved too, especially friends and family who live in the Midwest.

Like the old adage, Farr says: “There’s no free lunch—every penny has to be worked for in the political process.”