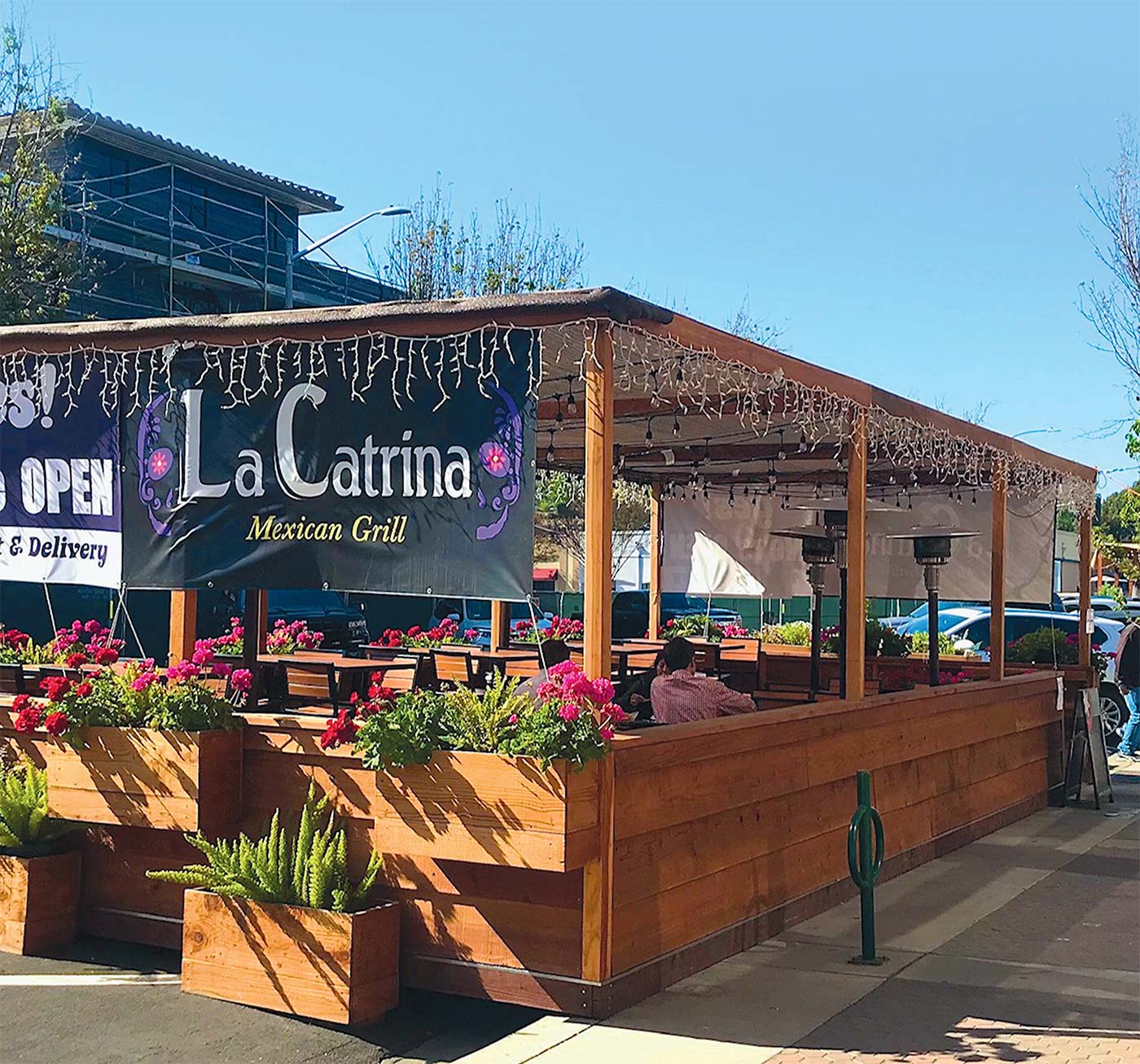 While many cities around the Monterey Bay are debating whether or not to remove restaurant parklets, Hollister has boldly stepped forward to make its outdoor dining structures a permanent fixture in its downtown.

Parklets, built to accommodate outdoor dining during the pandemic, have become a common sight outside restaurants. Now that the COVID threat appears to be waning and indoor dining has come back, there’s a fierce debate going on in cities such as Carmel, Pacific Grove, Santa Cruz and Capitola over whether the structures should remain.

But downtown Hollister has embraced its 15-plus parklets, and in fact the city has made them an integral part of its downtown revitalization plan, according to Peter Hernandez, a San Benito County supervisor and downtown business owner.

“We’re really seeing a shift in the downtown area—10 to 15 years ago, it was really dead,” says Hernandez, owner of Ohana Shave Ice. Hampered by fast-moving two-way traffic, the area was merely a place to speed through on the way to somewhere else, he says.

“Downtown is a lot more vibrant and busy than it used to be,” agrees Hollister Downtown Association Executive Director Corey Shaffer. “The parklets have definitely added to the ambiance.”

The Hollister parklets, all built according to city specifications and similarly constructed, nevertheless have their own personalities. Each business has added special touches like string lights, outdoor heat lamps, shade cloth or colorful patio umbrellas, cute signs and outdoor décor. Plant containers around the parklets were filled with beautiful succulents and other greenery by Growing Hearts, a Hollister nonprofit that helps adults with special needs develop gardening and landscaping skills.

Downtown revitalization had been discussed for some time, but COVID brought urgent focus to the issue. In order to help Hollister businesses survive and recover from the economic hardships imposed by the pandemic, the city decided to make room for outdoor dining spaces and reduce traffic by converting a four-block section of downtown to a one-way, one-lane street. Another unique feature that has been added, Hernandez points out, is angled parking spaces that must be backed into —a nod to Hollister car culture and one that makes it easier to display cool coupes, hot rods and motorcycles.

The parklets were inspired by similar outdoor dining spaces built along Third Street in San Juan Bautista, which has also made part of its main drag a one-way street. This creates space to accommodate the parklets and slow traffic, making it safer for pedestrians.

Hernandez says that seeing what establishments in San Juan Bautista had done with their parklets sparked conversation with the city of Hollister and the Hollister Downtown Association to do something similar.

Ad hoc outdoor dining spaces began popping up in Hollister in May 2020, when pandemic restrictions halted indoor meal service, and part of the downtown area was blocked off for this purpose. For the parklet program, says Daisy Caceres, senior support services assistant with the city of Hollister, the idea was to create a cohesive look for the downtown area that was also attractive. A series of meetings took place to iron out the details. “It’s kind of a pilot program, and all new to us,” says Caceres.

What really made it feasible for downtown business owners, though, was a unique funding collaboration that involved both San Benito County and the city of Hollister. Both city and county pledged a portion of their federal Coronavirus Aid, Relief, and Economic Security (CARES) funding toward the parklet program, $80,000 from the city of Hollister and $150,000 from the county, according to Caceres.

Businesses, after building the parklets according to city-approved designs, were eligible to be paid back up to $15,000 of their investment.

The only catch: The city council approved the downtown plan on Oct. 19, 2020, and parklets had to be completed within four weeks to qualify for reimbursement. A flurry of activity ensued with a fast and furious downtown makeover.

It wasn’t just restaurants and bars taking advantage of the parklet project. Two boutiques and a hair salon also put up structures. But eateries, bars and taprooms are the main beneficiaries.

Hernandez says this is part of Hollister’s “roadmap to recovery,” which also envisions the vibrant downtown scene as a draw for tourists who are passing through on their way to The Pinnacles and to Clear Creek Management Area—a popular destination for mountain bikers and off-road enthusiasts.

“The business community loves it,” says Hernandez of the new look for downtown. In addition to being a slower, family-friendly environment, “it’s a catalyst, a message to the community, to spend their dollars here.”

Part of the magic of the parklets, says Shaffer, is just being able to walk downtown and see who’s there and what’s happening.

“People are attracted to people,” she says. In the parklets, “people are gathering and having fun, laughing. That makes you want to be part of it.”