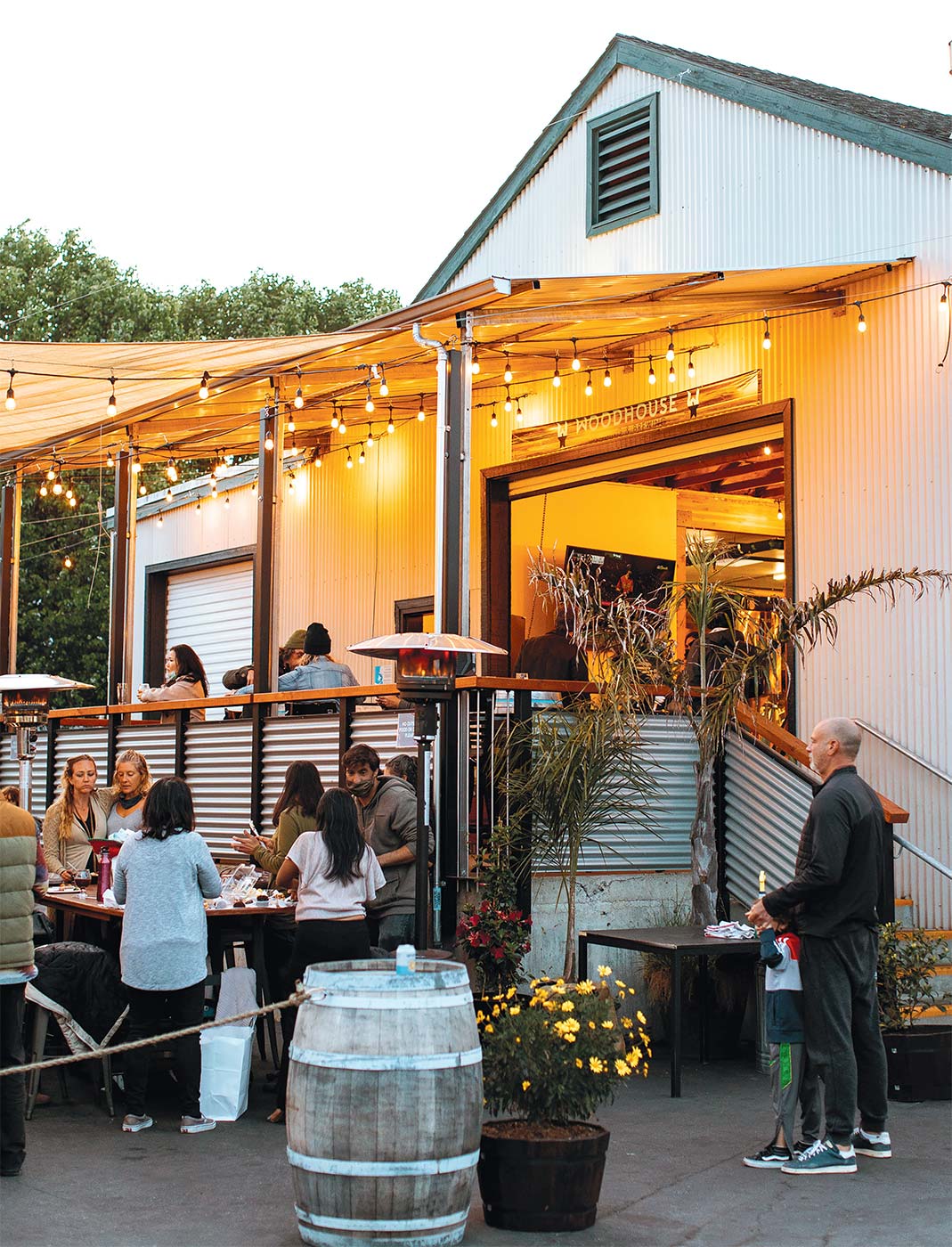 Where am I? Should I Google my location? These were my thoughts, even though I was confident I stood smack dab in the middle of Santa Cruz. Such was the power of the moment at new Woodhouse Blending & Brewing on a recent Friday afternoon.

Maybe it was the kinetic pan-Latin music from Papiba & Friends. Maybe it was the dozen masked women dancing in front of them. Maybe it was the Brazilian street food—fried chicken-potato balls, savory beef pies and “crazy meat” sandwiches—flying from the kitchen. Maybe it was the airy brewery- taphouse setting with its striking art, high ceilings, clean lines and detail-driven design. Certainly it was the inspired craft beers like Wanderlust IPA and Houndstooth Hazy, flowing steadily from gleaming taps set against a taupe tile wall.

In truth, it was all of the above, which—coming on the heels of pandemic lockdowns—gave Woodhouse that wonderfully foreign feeling. I ordered a tart and tasty Orange Tier kettle sour to toast the mood.

Co-founder and head brewer Mike Rodriguez is the alchemist behind the beers and has been at his craft for two decades. Across stops at celebrated spots like The Lost Abbey and Mason Ale Works, his creations have pulled in 13 Great American Beer Festival medals and three more from the World Beer Cup.

Before any of those West Coast brewery gigs, he got his start out of high school at Power Plant brewery in Kansas City, Missouri, which is where a surprising amount of Woodhouse collaboration first sprouted.

Fellow co-founder William Moxham met Rodriguez in middle school, but was in our area working for Apple and invited Rodriguez to join the Santa Cruz project. Rodriguez brought rugby buddy, brewing mind and accounting pro Tyler Johansen, another co-founder, with him. Fourth co-founder Ken Kieffer, whom Moxham and Rodriguez met in high school, came out from KC too. Newer partner Tug Newett is a pal from the Kansas City Art Institute.

“We wanted to get friends involved who could contribute skills and pitch in a little money and help us get through,” Moxham says.

Pre-Woodhouse, he’d been debating between going back to work 90- hour weeks for Apple or starting his own business. “There’s three things I wanted to make besides art and music,” he says, “beer, coffee or wine. It was kind of a no-brainer because Mike’s always been a real close friend.” The Woodhouse leadership squad started brewing here in 2018, after building the facility from scratch, hands-on, with help from Michael Doherty, the contractor who happens to work next door.

“We can bring the beer, so we’re looking for people who can bring in creativity and community. That’s the ultimate thing we can cultivate.”

The operating philosophy: strictly small batch, traditional and nontraditional styles, with an emphasis on blending brews for aging in barrels, to “inspire enthusiasts, as well as aficionados, worldwide,” per the brewery’s stated mission. Soon Woodhouse’s Krisp Kristofferson international lager and Something for Something IPA were finding traction in discerning local venues like Beer Thirty and finicky places further afield like Santa Barbara’s Llama Dog and Ventura’s Fluid State.

The execution of the beers reflects Rodriguez’s no-nonsense, no-hype, no-attention-needed-or-wanted style. When I asked him what makes his flavor profiles interesting, he deferred. “Interesting is subjective,” he says. “I just try to make clean and consistent beer. That’s my job.”

The various partners divided and conquered emerging tasks, with Johansen tackling city regulations, Kieffer spearheading IT and everybody wearing a number of hats. Early in 2020 the team began converting the wood mill that abutted the brewery into a 3,000-square-foot kitchen and tasting room that peeks into the brewing space from above.

“We can bring the beer, so we’re looking for people who can bring in creativity and community. That’s the ultimate thing we can cultivate,” Newett says. “We’re not trying to be a big established brewery. We’re looking to be a community support system for emerging local entrepreneurs and artists—cooks, painters, musicians, whatever.”

That’s already happening with the food, which is where an operation like Sampa Kitchen comes in. It’s a three-sibling team dishing Brazilian fare as chefs-in-residence. Complementing the main menu items like bolinhos de queijo (deep-fried potato dough stuffed with oregano and mozzarella) and tortas de frango (a traditional South American take on chicken pot pie) are rotating specials. On my visit that meant wild salmon in cilantro lime sauce, porção de calabresa and chicken-baconpesto sandwiches.

“I like how the place is set up as an indoor-outdoor type of thing,” says Sampa point person Natasha Malia. “In Brazil we grew up outdoors and we drink a lot of beer, so it’s a perfect combo with Brazilian food. We love it.”

“Culture and travel inspire us to do different things and ethnically we’re a diverse group of collaborators,” Moxham says. “We want to mix it up.”

Woodhouse’s early popularity in local bars and brisk can sales amid COVID told them their beer had found a following. With the tasting space’s mix of art, design and openness, they felt they had a formula for a special spot. But they didn’t anticipate being so busy they’d be running out of beer.

“We were confident that we’d get a good reception,” Moxham says, “but we didn’t think we’d get a near 100 percent return rate.”

Perhaps that’s because there’s more at work here than food, drink and setting. When I first visited and tasted through a flight, Newett and I didn’t talk about the brewing operation or its Kansas City roots or what I was sampling. We talked about how creatives might struggle with their own artistic value, or drug abuse, or personal worth or depression—and how outlets for expression can figure in.

In other words, the talk of art and community isn’t a sales pitch.

It’s an ongoing driver, and one that gives the place depth it might not otherwise enjoy. At the moment the most captivating pieces include an oxidized penny arrangement by Newett’s wife Deana and a series of portraits by Newett himself—of Amy Winehouse, John Coltrane, Anthony Bourdain, Frida Kahlo, Jean-Michel Basquiat and Prince.

It helps conjure the type of space that’s hard to create but now easier to find, no Google geography searches needed.