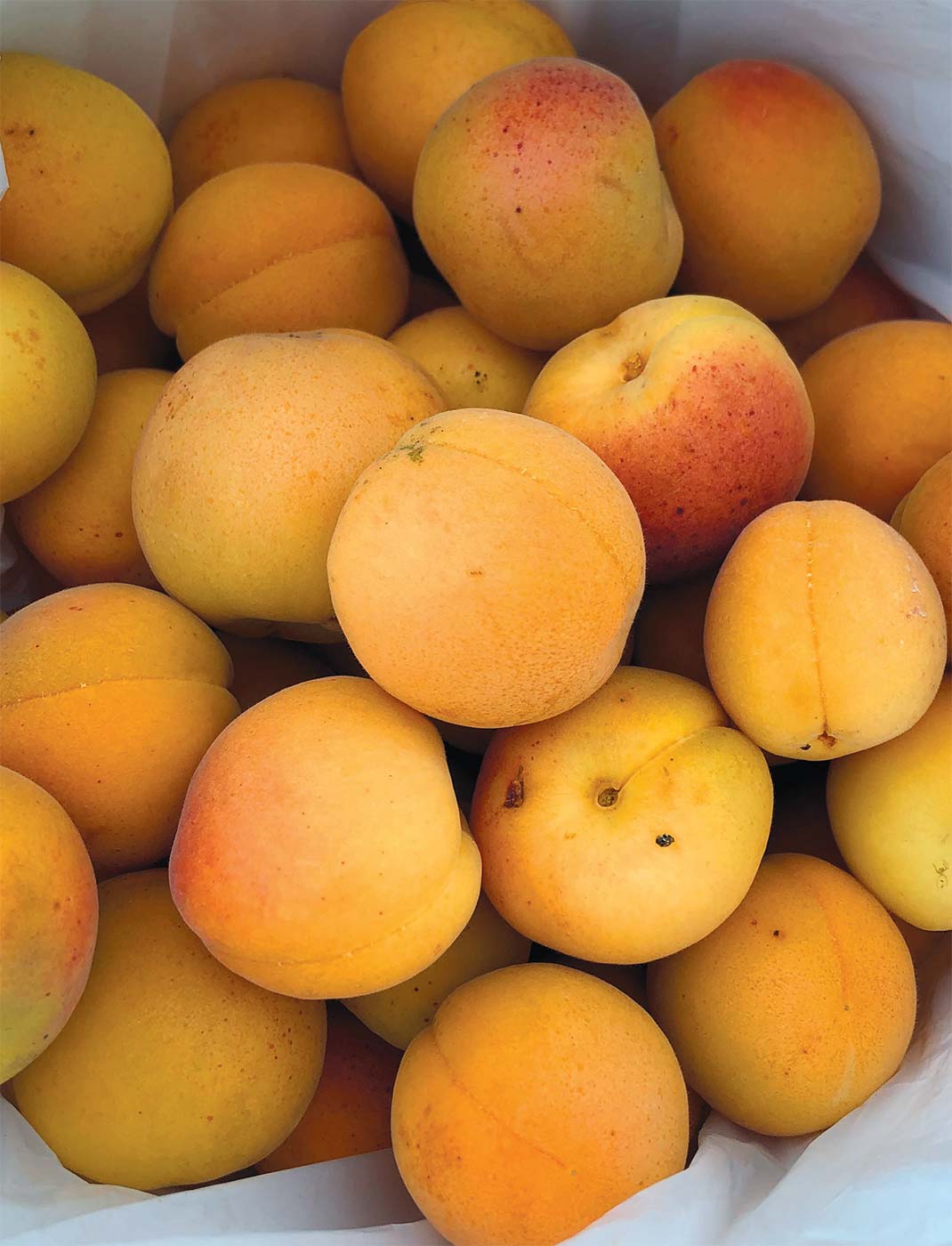 Apricots Delicate and fleeting, the first stone fruits of the season might be the best

Apricots became one of my favorite summer fruits when I was in college in San Luis Obispo and lucky enough to live in a little house with a large Blenheim tree in the backyard. This abundant tree produced delicious, sun-kissed, orange-colored spheres. I would fill my shirt with tree-ripened apricots and sit on a rock devouring my new favorite fruit, juice dripping down my chin. Apricots from this tree sparked my first interest in jam making, because I wanted to be able to jar up this sunshine-y flavor to savor all year.

Locally, apricots are grown in warmer inland areas like Hollister, Gilroy and Morgan Hill where daytime temperatures are hot enough to ripen sweet fruit and winter temperatures are cold enough for the apricots to set flowers and fruit properly. The two- to three-week season— in late June, early July—is so short that most fruit is sold dried.

The flat Santa Clara Valley was once filled with orchards of apricots and other stone fruits, but over the years farmers sold off their land to developers to meet the housing needs of San Jose and Silicon Valley tech workers. So now only the southernmost parts of the valley still have producing orchards.

In Hollister, for example, the Rossi family has been growing apricots at B&R Farms since 1929. They manage 40 acres of Blenheim apricots and sell dried fruit, preserves and chocolate-covered dried apricots. During harvest season they offer a U-Pick, where those not lucky enough to have a tree in their backyard can gorge on fresh fruit and fill buckets with apricots for cooking and preserving.

Apricots, Prunus armeniaca, are in the rose family, which also includes cherries, plums, peaches and almonds. Apricots were first cultivated in China about 2,000 BC and were traded by travelers on The Silk Road and likely made it to Persia where they took root and were then distributed around the world.

Persians love to add apricots to their meat dishes; their traditional lamb stew includes cooking the meat with dried apricots and raisins, a cinnamon stick, saffron, mint, jujubes and a little honey.

In the Middle East, street vendors sell a luxurious drink made of amardine—mashed sundried apricots rehydrated with water and blended with sugar, pine nuts, pistachios and rose water. Other uses include dried apricots stuffed with almond paste, or a dessert of fresh apricots whipped with cream and orange blossom essence.

Fun fact: Apricot kernels, the nut inside the pit, are used in Chinese medicine. While toxic in large amounts, they contain amino acids that support the large intestine and lungs—which can stop wheezing and can unblock the bowels.

Apricots are full of vitamins A and C, and the orange fruit contains loads of beta carotene.

Apricots are much more popular in other countries than they are in the United States, therefore our acreage pales in comparison. Turkey produces 21% of the world’s total, followed by Iran and Pakistan. California produces more than 95% of commercially grown apricots in the U.S. which are mainly slated for processing and are dried, canned or made into products like baby food or pie filling. Washington is the only other state with commercial production for the fresh market.

The problem with selling apricots on the fresh market is that they are so perishable they need to be harvested unripe to be shipped. There is no way to harvest them ripe and get them to a grocery store in time. The unripe fruit that is shipped is pale and tasteless and gives consumers the idea that apricots are not tasty, thereby decreasing demand. Unless a grocery store works directly with farmers who can deliver freshly picked fruit, farmers’ markets are the only place to get a flavorful ripe apricot without growing a tree yourself.

Peter Van Dyke, a fifth generation farmer in Gilroy, grew up on an apricot farm at the base of the Gavilan Mountains that has been CCOF certified organic since 1986. During his youth, his family sold both fresh and dried Blenheim apricots and bing cherries at the farmers’ market, and sold most of the dried fruit wholesale. The harvest window for Blenheims is so short and labor intensive that these days none of the fruit Van Dyke sells is fresh. All apricots are picked and placed on wooden trays for drying in the hot summer sun. Both unsulfured and sulfured apricots are sold to processors and retail outlets, such as New Leaf Community Markets. Van Dyke says that, sadly, people don’t know what apricots are anymore and that interest in them has dwindled. As the market has declined, many farmers have removed trees to make space for more lucrative crops. Van Dyke says nothing compares to a Blenheim for flavor but reports there are flavorful new hybrids coming out, like the golden sweet and the Modesto.

While reaching out to Van Dyke for this story, I learned his mother Betty had passed away at 88 years old. He lovingly called her the “Matriarch of Apricots,” because Betty worked on the farm with her grandfather from the time she was old enough to pick windfalls from the ground. She helped every season and eventually learned every aspect of the business and was still involved when she had her own family. When her father got sick and couldn’t farm anymore, she and her three sons took over, transitioning to certified organic. Betty Van Dyke lived a rich life of surfing and farming apricots and cherries, and with her sons’ help pioneered and improved modern methods for high-quality dried organic fruit.

GROW YOUR OWN APRICOTS

Apricot fruiting wood is typically grafted onto plum or peach rootstalk. The rootstalk provides a vigorous root system and growth habitat but none of the flavor characteristics. Popular self-pollinating varieties grown in California, besides the Blenheim, are Wenatchee Moorpark, Tilton and perfection. Varietals like moon gold and sun gold need to be planted together to pollinate each other.

Apricot trees should be planted 18 feet apart between rows, and 14–16 feet between trees. For ease of labor, they should be pruned to a shorter height to avoid the need for a ladder when thinning and harvesting. Plant several varieties that have different harvest windows to prolong the time you will be harvesting fruit, instead of one variety you will need to harvest all at once. Apricots tend to be somewhat alternate bearing as many fruit trees often are, which is another reason to have several varieties planted. Trees will need to be pruned to an open center each winter to produce good fruit yield and thinned to get desired, larger sized fruit.

Apricots prefer warm, dry places during growing season, and need winter chill hours below 45° F to flower and have good fruit set. Since apricots bloom between February and March, they can be a precarious crop. A late frost can damage the flowers and affect the fruit set, while late rain at bloom can cause disease issues. If it gets too hot while fruit are maturing, the fruit will soften prematurely, causing “pit burn,” and if temps get too high near harvest, there is risk of sunburn on the skin of the fruit. Soil should be well drained to avoid fungal issues in the roots. Varieties need between 300 and 1,000 chill hours, so it’s best to do research if you are planning to buy a tree, to make sure you have the right climate.

My favorite way to eat apricots is fresh, but when I have an abundance I like to make apricot salsa fresca, utilizing various stone fruit instead of tomatoes, adding chopped fresh or roasted chiles, cilantro, red onion and lime juice.

Apricots are great grilled, because the heat caramelizes the sugar in the fruit. Choose firm yet ripe fruit, cut them in half, remove the pit then grill. Let cool and fill them with goat cheese or ricotta and top with toasted pine nuts or pistachios for a beautiful summer appetizer.

My farmers’ market friends know I will gladly accept and process bruised fruit that won’t make it to their next market. I often dehydrate it and make breakfast bars.

Or try making a tasty salad dressing—simply roast the apricots and blend in with olive oil, lemon juice, sautéed shallots, curry powder (if desired, but not necessary) and salt.

Of course there is always apricot jam, in my opinion one of the best kinds because it has a velvety texture and needs nothing added to make it taste amazing (although, full disclosure, I do add a splash of Meyer lemon juice to balance the sweet with acid). It makes a nice topping for a frangipane tart. Chutney is another great idea or try adding pepper to your jam to serve with savory food like cheese platters and as a sandwich spread.

Elite level cyclist and nutrition coach Ginger Snell launched Bella Bee mobile espresso bar and bakery last year and can usually be found in Seaside, Monterey or Carmel Valley. Her delicious baked treats often pack an extra nutritional boost and while Snell is not vegan, she says she loves using whole food ingredients that do not include animal products. In these delicate bars, for example, coconut oil takes over the role of butter, but she says: “You wouldn’t know they are vegan when eating them.”