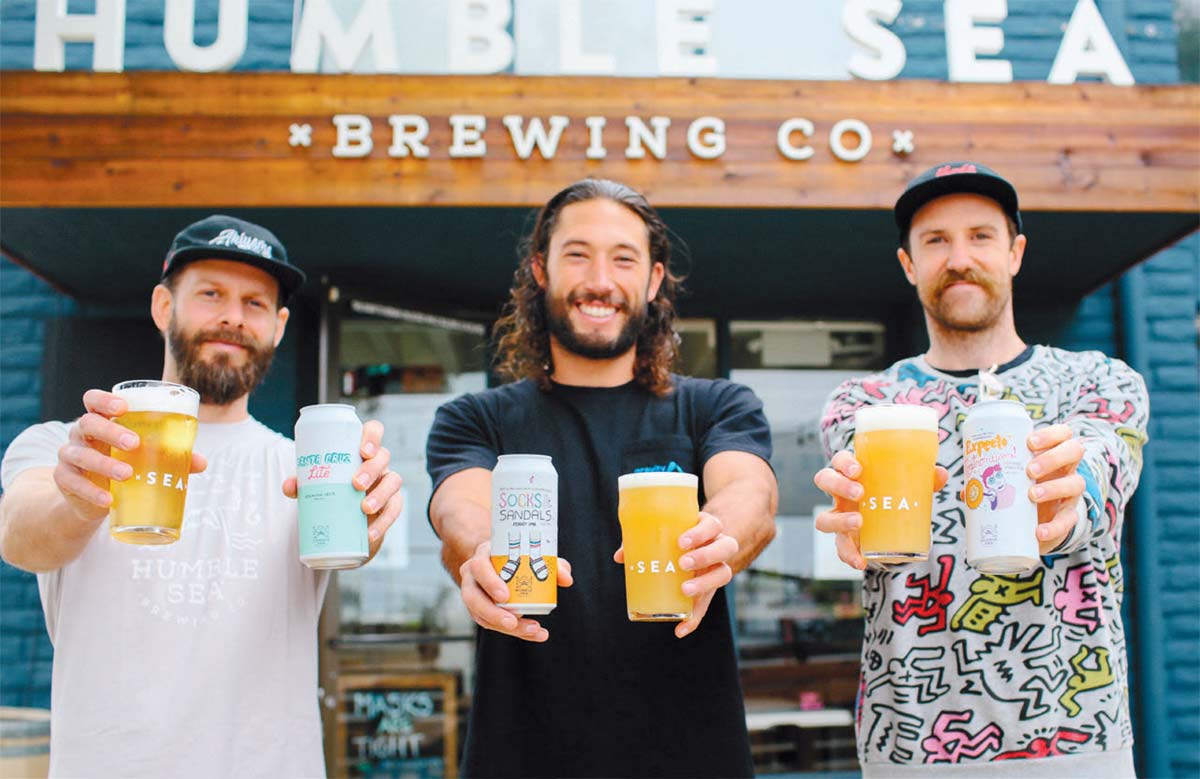 Humble Sea Brewing Co. celebrated the third birthday of its taproom on March 17, just as coronavirus surreality was settling in, and two days before Gov. Gavin Newsom announced shelter in place for the state. No, it was not an ideal time to celebrate what has become a cult-hit venue—thanks to enthusiastic staff and experimental, often hop-heavy ales.

But a funny thing happened when the pandemic hit. Instead of contracting, Humble Sea is flowing more beer than ever. E-commerce sales have exploded. Collaborations have multiplied. Product is more creative, consistent and high quality than ever.

Co-owner and head brewer Nick Pavlina cites two reasons: 1) the response of his team to unprecedented plot twists and 2) the demand from craft beer lovers.

“The most challenging thing has been opening a shipping department and building out an e-commerce business essentially overnight when we had no clear intentions of doing so anytime soon,” he says. “Seeing our current team step up big time has been one of the most rewarding things.”

“We do our best to convey good vibes and massive amounts of kookiness through our cans—the artwork and beer names,” says cofounder Frank Scott Krueger. “Dumb sea puns and plenty of soft tops to go around!”

Special releases debut at precise times (typically noon on Sundays). Each installment includes at least two new cans, and each new release has sold out, some in seconds. Thirty-two ounce crowlers offer additional options, and also frequently sell out.

“Being able to move as many cans as we have has been a little surprise to all of us,” Pavlina says.

Another adaptation has provided more flavorful fun: With the festival circuit and travel shutdown, traditional in-person collaborations are toast.

Humble Sea has responded with a cascade of playful “virtual” partnerships with breweries around the country such as Finback (New York), Southern Grist (Nashville) and Cerebral (Denver).

Humble Sea co-owner Taylor West says quarantine doesn’t change much about them: Everything that happens in a normal collaboration still happens, minus visits, including weeks building a recipe via emails and texts.

“We talk about what kind of beer we want to make and work backwards,” he says. “It’s a great opportunity just to try something new or play with ingredients a brewery is excited about.”

It hasn’t been all aromatic hops and happiness, though. Pavlina, West and Krueger were pained to close the kitchen and bar and furlough a swath of employees—but the upswing in production means they’re adding brew staff. After teaming with Sacramento-based mobile canning company The Can Van for two years, Humble Sea just powered up its own canning line.

That allows for a big bump in flexibility and freshness and means sell-outs won’t happen so suddenly. “We love having quick-selling beer, but [it can be] too fast,” Krueger says. “We want the folks that really want our beer to be able to get it, and share it with their friends.

“The canning line gives us a lot more range on how much and when we can can,” West says. “It helps us be way more efficient.”

Normally summertime is peak social season at the Swift Street taproom. Between the bikes, the dogs, the kids, the tree-shaded patio, all the funky vintage details and pop-up food trucks, it enjoyed real magnetic magic. Now it’s anyone’s guess if Humble Sea will ever quite realize that glory again.