On most mornings, Kelly Damewood rides her sea foam green cruiser along West Cliff Drive to her office on the west side of Santa Cruz. From the lobby, she passes reception and winds her way through a collaborative workspace of short and tall desks to a modest but beautiful glass office in the corner. There she parks her bike, sips on her favorite juice from Central Coast Juicery and begins her day as the CEO of California Certified Organic Farmers. At 31 years old, she may still have a mountain of student debt, but every educational decision and career choice she has made has prepared her for the dream job she took on at the beginning of the year, and Kelly Damewood is passionate about a future that is increasingly organic.

“It takes a lot of different types of production to feed people organically,” she says. “I’m really committed to ensuring that CCOF is an inclusive certifier, that we certify everything and everyone…from the smallest quarter-acre farmer to some of the largest.”

CCOF was founded in 1973, making it one of the oldest and largest organic certifying agencies in the nation. It not only certifies organic farmers and producers but also tackles policy issues at the state and national levels. The CCOF Foundation invests in organic farmers and businesses with education and grants. To say that Damewood has a lot on her plate would be an understatement. But if anyone can do it, this millennial woman can.

After graduating from the University of Portland in just three short years, Damewood worked on an organic farm in Oregon with a friend. They admittedly knew very little about agriculture, but were soon running every aspect of the farm, from caring for the health of the soil to harvesting and marketing. The experience changed her life.

They admittedly knew very little about agriculture, but were soon running every aspect of the farm.

“It opened my eyes. I think for the first time in my life I felt connected in a way that I never felt before. I had a greater purpose,” she recalls. During that farming experience she began to see the challenges that farmers face with laws and regulations. She began to understand how much law, policies and political systems impact the ability of people who want to grow and prepare better food. This awareness motivated her to attend Vermont Law School, one of the top environmental law schools in the country. Her goal was to build her skill set to address those systemic issues that face organic farmers. To further that aim, she then earned a master of law degree at a more traditional agricultural school, the University of Arkansas.

“It gave me a deep dive into the food and agriculture systems…and that was a really important time for me to figure out what I like working on,” Damewood says.

After graduating in 2014, she joined CCOF as policy director, tackling everything from water regulations to updating outdated state organic laws and national policy.

CCOF played an important role in the latest U.S. farm bill by working strategically to connect elected officials with organic farmers and producers—think organic farm tours with elected representatives. With Damewood’s help, the agency was able to attain bipartisan support for organic priorities including research funding.

“One of the powers of organic advocacy is that you can help bridge the gap between conventional agriculture and environmental conservation groups,” Damewood says. Clean air, water quality, soil erosion, protecting pollinators and supporting biodiversity are unifying issues.

That brings us to her latest undertaking: the Roadmap to an Organic California. This research project outlines how organic agriculture can sustainably feed the world’s population, while protecting the environment and promoting public health, social justice and prosperity. It is an impressive document filled with science and statistics and, among other components of the proposed plan, calls for increasing California’s organic acreage from the current 4% to 10% by 2030.

When asked how she feels about being identified as a millennial, female CEO, she admits that people were skeptical at first. After a national search with more than 500 applicants, her passion for the organic movement and her belief in the CCOF mission pushed her to the top of the list to replace outgoing CEO Cathy Calfo.

“Besides,” she says, “it is my generation that is growing the organic market right now.” According to the Roadmap to an Organic California, 8 out of 10 Americans buy organic food and 42% of organic consumers are millennials (ages 18–37). Because the original organic farmers and advocates are starting to retire, there has to be a new generation that will carry forth the legacy while embracing the future. “We have to be cultivating not just the next generation of organic farmers, but also organic leaders,” she says.

Having CCOF based in Santa Cruz is a dream for a food lover like Damewood. Good, local, organic food is a huge part of her life and she feels blessed to be surrounded by it. With vivid memories of growing up in a family that cherished home-cooked dinners, she loves hosting meals with friends. Being a CEO is a job of service and every day she serves as a liaison between the many groups that make up the CCOF. She works hard to balance the internal day-to-day details while keeping focused on the big picture. It’s a full life. A bike ride back along the coast to her downtown home then hosting a meal made of fresh, local, organic ingredients among her friends seem like the perfect way to end the day. 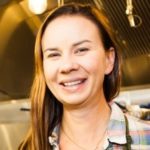 Always on the hunt for a great story, Emily Thomas loves to spin the yarn. Brewery owner by day, she is active in the Santa Cruz food culture and spends her days using organic beer to build community.