Fragile and fleeting, a quintessential
fruit to be enjoyed close to the tree

Figs elicit for me fond memories of my great grandma Tootsie and her beloved fruit trees. She and I would go out to the long row of trees lining her home in the high desert and pick figs for her special fig jam. Of course, we ate plenty straight off the tree, too. She didn’t make a habit of preserving other fruit, but figs were her absolute favorite and she preserved jars of them religiously each year. Figs hold a special place in my heart and on my plate, molded by my grandmother’s passion for them and by my young taste buds that, in her orchard, experienced the delicious, sweet flavor of fresh figs for the first time. I would always visit in the summer when the figs were ripe, so year after year I would look forward to our harvest ritual.

Figs are indigenous to western Asia and were gradually introduced to the Mediterranean, where legend has it the Greek god of wine and debauchery, Bacchus, celebrated the first fruits of the fig harvest with wild parties and orgies at which guests wore crowns of fig leaves and garlands of dried figs. The fruit was revered as a symbol of virility and fertility and was so prized by the Greeks and Romans that they created laws forbidding export of the best quality figs. Maybe they knew how healthy figs are to eat; figs are high in fiber and potassium along with B6 and essential micronutrients that are believed to combat heart disease and cancer. And figs are still considered to be an aphrodisiac.

The figs we eat, Ficus carica, are one of the few edible ficus in the mulberry family, and today California is the third largest producer of them in the world, after Turkey and Egypt. About 98% of America’s fresh figs and virtually all of our dried figs are grown in the state. Fig fruit is unique in that it does not start with a flower. Instead it begins as a hard, round green peduncle, or stem, that eventually turns into a pouch called the syconium. The interior of the syconium is lined with hundreds of tiny flowers, which will form into drupelets, a word that describes the inverted flowers that become what we call figs—in other words, the fig is not a true fruit but a flower! The explanation for this complicated fruiting process evolves from a symbiotic relationship between the fig tree and its main pollinator, the fig wasp. Tiny wasps hatch inside the drupelets, mate and dig an escape hatch to vacate the fig.

Wingless male wasps die while the females fly away covered in fig pollen from inside the fig where they were hatched. The female wasps move on to another immature fig and lay their eggs by entering the small hole at the bottom of the fig. Once they enter the new fig, they pollinate the fig flowers inside with the pollen from the fig that they were born in. And then the cycle repeats, with the fig and the wasp co-evolving in harmony. Most varieties of figs are self-pollinating, but varieties like the Calimyrna rely on the wasps to have fruit each season.

Monterey Bay figs start in June with what is called the breba crop, which is lighter, a bit more acidic and less sweet than the second, heavier crop that is harvested from late summer into the fall. There is no commercial production of figs in the Monterey Bay region, but many people grow figs in their yards. The bulk of production is in the Central Valley, just a few hours away.

HOW TO PICK A GOOD (RIPE) FIG AND STORE IT

Figs are very fragile and don’t ship well, so if they are not dried (as most California figs are), they need to be eaten within a few days of harvest. So they are a true locavore treat if you’re lucky enough to live close to where they grow, as we do. Your best bet to get your hands on fresh ones is to visit the farmers’ market.

Knoll Farms out of Brentwood sells biodynamic Adriatic, Black Mission, Brown Turkey and Kadota figs at the Santa Cruz Community Farmers’ Markets, picked the day before. Hamada Farms, a fourth generation farm out of Kingsburg sells a variety of fabulous figs at the Tuesday Alvarado Street farmers’ market in Monterey.

Look for figs that are heavy, plump and tender to the touch but aren’t mushy. Smelling the fig is a good way to know if it is fresh and ripe—if the fragrance is sweet and floral, it is ready. If it smells fermented or sour, it is past its prime or spoiled. Also, make sure no mold is starting to grow on the outside of the skin.

Don’t buy ripe figs more than a day or two before you plan to use them, and store them covered in either a brown bag or a container in the refrigerator. Let them come to room temperature before eating. If the figs need a few days to ripen, leave them on the kitchen counter out of direct sun until they are ready.

Figs are one of those trees that are perfect to have right outside your front door. Easy to grow (as long as you protect them from gophers, which go nuts for the fig’s tasty trunk and roots), fig trees are generally disease and pest free and can be planted anywhere—including a pot—that does not drop below 15 degrees. Fig trees grow up to 30 feet tall but with pruning, can be kept to a manageable size for ease of harvest. In about five years, a fig tree can start to provide quite a bit of fruit to share.

There are many kinds of figs with various colors and flavors of skin and pulp, and many grow well in the Monterey Bay area. Some are best suited for relatively inland microclimates that tend to have warmer summers and colder winters than the coast while others flourish best in cooler coastal climates. Late rains during the fruiting cycle can cause the first set of figs to split, but the main crop should not be affected.

Black Mission: This fig with its dark purplish-black skin and its sweet, nutty, red flesh was planted at all the California missions from San Diego to Sonoma in 1769 by Father Junipero Serra. One of the most productive varieties, this large fig tree is standard in commercial production and bears large fruit.

Black Jack: This variety is similar to Black Mission but is a smaller, spreading tree that does well in pots or in smaller areas. Brown Turkey: The largest of the figs with brown skin and watermelon- colored flesh, the Brown Turkey requires heat to ripen well and a lot of space to spread out.

White Kadota: This type of fig bears fruit with sweet, amber flesh and a thick, yellow skin. It requires 100 hours of chill time, so it is best planted inland where temperatures get cold in the winter and summers are hot and dry.

Calimyrna: A nutty and sweet variety of fig that needs cross-pollination by fig wasps in order to set crop, this variety is used most often for the dried market because of its flavor profile and large size. Adriatic: Originally from Central Italy, this variety produces a tasty, good-sized, green-skinned fig with jammy, rose-colored pulp.

Desert King: This fig is the best one to grow on the coast, even though the name says otherwise and it was developed inland, in Madera, Calif.! It bears floral, fruity-scented figs with an essence of dates. Its light green skin turns yellow when ripe and the flesh is strawberry colored. Like the Calimyrna, it needs pollination to set a main crop.

EATING AND COOKING WITH FRESH FIGS

Figs are great when paired with strong cheeses and other salty foods and mellow out bitter flavors like radicchio. They are especially good grilled— use a rosemary skewer to hold them in place, drizzle with olive oil, reduced balsamic vinegar and sea salt and place on the grill. Slice them raw into salads, add to yogurt or wrap in prosciutto with blue cheese.

If I have extra ripe figs (dried figs work great, too), I make fig vinegar by heating on the stove balsamic or red wine vinegar mixed with a little brown sugar or maple syrup and a cinnamon stick. Add the figs and bring to boiling, then reduce the heat to low and cook 5 minutes. Let the mixture stand for 24 hours, then remove the cinnamon stick and purée the rest. Strain in a cheese cloth and press the solids to extract all of the liquid. Transfer to a jar and store in the pantry. 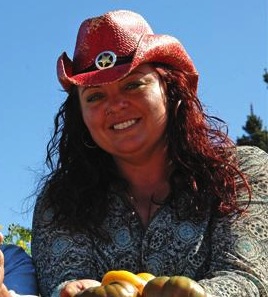