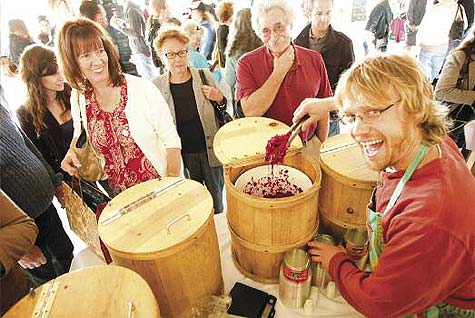 The local food calendar always explodes with activity in summer, but this year is different. As this issue of Edible Monterey Bay went to press, an astounding number of new developments in the farmers’ market scene were popping up across our area.

Plans were also under way for new artisanal food and farmers’ markets in Santa Cruz and Carmel-by-the-Sea, Everyone’s Harvest was working on a small market for the CSUMB campus and two others had just opened—one in Capitola and one in Watsonville. (See our summer market directory on p. 57.)

The next new local food event slated to launch this year is the Santa Cruz Community Farmers’ Markets’ Foodshed Project, a festival- spirited, monthly first-Wednesday event that is being directed by Nicki Zahm. The project’s first installment, June’s “Strawberry Bonanza,” will feature an educational “Hay Bale Forum” provided by Swanton Berry Farm and a strawberry hunt conducted by Food What?!, the youth empowerment program. Companion Bakeshop will hold cooking demos. The July “Livestock Lowdown” will feature a barbeque of pastured meat, and collaborators are expected to include el Salchichero, Fogline Farm and Food What?!. August will focus on stone fruit and September, tomatoes.

Funded by the USDA through a grant given jointly to the more than 20-year-old SCCFM and EcoFarm, the intent is to help consumers “think more about the food they buy and where they buy it,” says Market Manager Nesh Dhillon. “This whole grant thing has been a blessing because it has allowed us to dip our toes into the world of education.”

Meanwhile, Carmel-by-the-Sea, which had kicked the idea of a farmers’ market around for at least three years, is expected to finally get its market this summer or fall, as new mayor Jason Burnett, at his very first council meeting in May, created an ad hoc committee to make recommendations for a regular downtown event.

For his committee, Burnett has lined up high-profile local foodies including Eric Schlosser, the author of Fast Food Nation and known to many for his role in the documentary Food, Inc., and David Fink, one of the founders of the Masters of Food and Wine event and CEO of the Mirabel Hotel and Restaurant Group, which manages such Carmel restaurants as Aubergine, Cantinetta Luca and 400°.

“The hope is that we create a weekly, seasonal farmers’ market that is very nicely laid out and would morph into an outdoor dining venue,” Fink says, suggesting that one of Carmel’s restaurant-dotted side streets could shut down to vehicle traffic for an afternoon market each week, and then remain closed for the evening, evoking San Francisco’s Maiden Lane pedestrian mall, and encouraging shoppers to linger, mingle over a glass of wine and have dinner at a local restaurant.

Also planned for this summer is a permanent indoor market in downtown Santa Cruz that Gabriella Café owner Paul Cocking hopes to open in July. So far, the location is being kept a secret. As we reported in our Spring issue, Cocking is taking San Francisco’s Ferry Plaza Farmers’ Market as his inspiration. The market will be open daily and will include a mix of farmers and food artisans. Brad Briske, one of Gabriella’s talented chefs, is expected to run one of the anchor businesses, a café with an attached salumeria and crudo bar.

Sand City’s Independent Marketplace (Indy for short) is also an indoor market, and has an atmosphere all its own. It runs from 4–9pm and is located in the airy, light-filled warehouse-like first floor of a mixed-use building called The Independent, which serves as a base for owner Patrick Orosco’s efforts to nurture Sand City’s growing artist and food communities.

Each month, the market explores a theme with participating local organic farmers, artists, chefs and food artisans—like jam and cheese makers—and plans are in the works for a speaker series. Wine and beer tastings were part of the first market, which had a Big Sur motif and benefited the Henry Miller Library. The second installment’s theme was Cinco de Mayo, and the beneficiary was Salinas’ Agricultural and Land-Based Training Association. Tequila tastings and Mexican food helped create a celebratory atmosphere.

Some of the Indy’s special amenities include a “veggie valet” where, after shopping, people can park bags filled with heavy produce and artisanal pantry items, and a “kids area” where parents can take small children to play.

“We’re taking the model of the farmers’ market and making it a lot more fun and comfortable for singles and for families,” says Todd Champagne, the Indy’s manager.

Champagne, who lived and worked on local farms for several years before starting Pacific Grove’s organic-certified Happy Girl Kitchen Co., which preserves local produce and teaches preserving techniques, says he was concerned, however, when he realized that an ice cream vendor, Santa Cruz’s creative, organic, small-batch Penny Ice Creamery, took in three times the revenues that the highest-grossing farmer pulled down at the May event.

“We may have to tell people there’s no having dessert until after they’ve supported our farmers,” Champagne says jokingly. Difficult to enforce, yes, and not actually on the agenda, yes again. But in all seriousness, Champagne is hard at work on possible remedies, like awarding coupons for hot food discounts to customers who check bags full of fresh stuff with the veggie valet.

Everyone’s Harvest, which manages markets in Salinas, Marina and Pacific Grove, is also using incentives along with education to help promote the purchasing—and eating—of its fresh and nutritious offerings. The organization recently launched its free Healthy Interactive Cooking Workshops, and offers $10 worth of coupons to participants, redeemable in produce sold by its vendors. “We know that access [to healthy food] is necessary for people, but we’ve also realized that education is important to change people’s diets,” says Iris Peppard, executive director of Everyone’s Harvest.

Also expanding its education and outreach is the Monterey Bay Certified Farmers’ Markets, the more-than-three-decade-old group that operates out of Aptos, Monterey and Carmel. This Spring, MBCFM launched at its Aptos market its “Can you Dig It” gardening workshop series with the Monterey Bay Master Gardeners and its “Of Course I Can” cheese, sauerkraut and jam-making classes with Mountain Feed and Farm Supply. And with Mountain Feed now selling its homesteading supplies at the market, it can provide would-be canners with a one-stop shopping experience that includes classes, produce and canning equipment.

In some lines of business, new kids on the block can be viewed as competition. But in a happy twist, the net effect of all of these new venues and special programs may be a boost in traffic that all area farmers’ markets will be able to share, because some of the new events are producing novel solutions to the age-old problems of how to get consumers to grasp why shopping for fresh, local and seasonal produce is important—and how to make it convenient for them. And together, the new events are helping create more excitement about our region’s local produce and artisanal food products than has ever existed before.

For more information about all of these markets, see our Summer farmers’ market directory on p. 59 of this issue or under the “LOCAL FOOD GUIDES” tab on our website, www.ediblemontereybay.com.