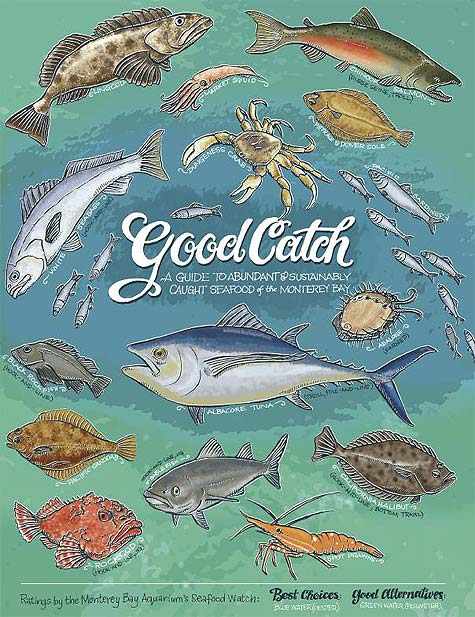 Illustration of plentiful, sustainably caught seafood of the Monterey Bay by Bambi Edlund. We recommend you make a color photocopy and hang it in your kitchen!

A party with a purpose

The Monterey Bay Aquarium stands guard at one of the world’s most pristine ecosystems, its fierce advocacy fueled by the vivid reminder that just 80 years ago, our bay faced ecological ruin.

In his book The Death and Life of Monterey Bay: A Story of Revival, marine biologist Steve Palumbi describes these waters in the 1930s as “an overfished, industrial wasteland.” Just 150 years after Spanish explorers discovered the teeming bay, many of the sea creatures had vanished, and sardine factories spewed stench and waste before exhausting the fishery.

Those who damaged the bay grew inspired to preserve it, and they soon implemented groundbreaking principles of sustainability— including establishing a local marine refuge in 1931—that continue today.

When it opened in 1984, the aquarium vowed to help carry that torch, creating scientific and educational arms to find answers and sound appropriate alarms to prevent ecological backsliding. In 27 years, it has widened the path of public consciousness regarding the health of Monterey Bay.

To help protect fisheries, the aquarium hosted the first-ever Seafood Summit in the mid-1980s, and managing director Julie Packard became actively involved in groups like the Pew Oceans Commission and California’s Nature Conservancy.

The program has roots in the aquarium’s Fishing for Solutions exhibit that opened in 1997 and produced one of the first lists of sustainable seafood. It sparked interest in the power of the consumer and led to the formation of other advocacy groups, including Fish- Wise of Santa Cruz, founded in 2002 to help grocery retailers in their seafood purchasing decisions.

When asked to develop a fundraiser for Seafood Watch, the aquarium’s director of special projects, Ginger Hopkins, turned to chefs, the influential tastemakers and trendsetters of the day. She wanted to plan a local food and wine event that was decidedly more thoughtful than the gaudy, gastronomic events seen elsewhere. Hopkins called it Cooking for Solutions, a celebratory showcase on sustainability and our connection with the fragile planet. The 12th edition takes place May 18-20 and features gourmet food and wine, a gala, panel discussions, cooking demos, adventures and opportunities to meet the country’s most celebrated chefs.

A number of local restaurants will host the visiting chefs; area chefs who will present at the event include Art of Food’s Wendy Brodie, Earthbound Farm’s Sarah LaCasse, and Passionfish’s Ted and Cindy Walter.

Packard loves the tone of the event.

“We’ve been so fortunate to work with incredible chefs, winemakers and purveyors who share our deep commitment to transforming food systems so they contribute to healthy soils and healthy oceans,” she says.

The aquarium’s culinary partner, Cindy Pawlcyn, who has opened several iconic restaurants and and is overseeing a major renovation of the aquarium’s restaurant, calls the collaborative environment at CFS “inspirational.”

“A lot of us are into sustainability, and sometimes that’s a hard sell,” she says. “So it’s nice to be with like-minded individuals.” Brodie has volunteered her talent since Day 1 when she hosted Chez Panisse’s Alice Waters and other chefs at her Carmel Highlands home.

“I was so thrilled to be asked and included, and still am,” she says. “This isn’t just a party. Our local event is helping change the world.”

Mike Hale (the Grub Hunter) is a freelance writer and food blogger who lives on Spaghetti Hill in Monterey with his wife Melissa and a rotund orange tabby named Sopa. Read more at thegrubhunter.com.

How do you dress a fish? It might sound intimidating, but serious local foodies are likely to line up for an answer as part of an expanded Salon Series at Cooking for Solutions this May.

“How to Dress a Fish” is led by Monterey Bay Aquarium’s Executive Chef Jeff Rogers.

“I want to take something sustainable, like black cod, and prepare it four different ways,” says Rogers. “Maybe a summer vinaigrette, a winter preparation with parsnips, skin on, skin off. I want to show versatility and seasonality.” The series also includes the following:

Classes cost $45 ($20 for aquarium members) with a oneday pass priced at $80. See www.cookingforsolutions.org for more details. In the kelp forest: Wendy Brodie, a Carmel chef and caterer,
serving at Cooking for Solutions.