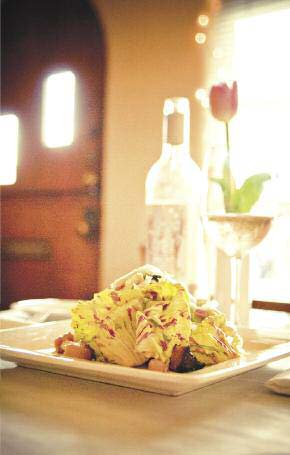 LOCAL FOODS IN SEASON:
MARCH, APRIL AND MAY Gabriella Café has been a fixture of the local, seasonal foods movement since the restaurant opened nearly 20 years ago, just a couple of blocks down Cedar Street from the Downtown Santa Cruz Farmers’ Market.

In the beginning, owner Paul Cocking, a former high school English teacher who’d used the proceeds of a stint as a Santa Monica Jaguar salesman to open Gabriella, and Jim Denevan, the restaurant’s first chef, began buying most of its produce right from the market. Today, 95% of the restaurant’s produce comes from the city’s farmers’ markets and deliveries from local organic growers like Live Earth Farm and Dirty Girl Produce.

Denevan remained with the restaurant for 10 years before taking the farm-totable movement on the road with his acclaimed Santa Cruz–based Outstanding in the Field, the roving restaurant that celebrates local farmers and food artisans by setting the table literally in the field, around the world.

Cocking, meanwhile, is preparing his own next act: a permanent, indoor local food artisan market in downtown Santa Cruz.

“We are talking to a building owner right now to start a kind of Santa Cruz version of the Ferry Plaza,” Cocking says, referring to San Francisco’s Ferry Plaza Farmers’ Market.

Cocking’s plan is to include a baker and a few farms as well as some of his former cooks, such as Rebecca King and her Garden Variety Cheese (a sheep’s milk dairy) and charcuterie specialist Brad Briske, who will provide the anchor business, a café and attached salumeria and crudo bar. Briske, who is back serving as sous-chef at Gabriella after a turn working for Main Street Garden, also plans to host a supper club at the café a few nights each week.

Meantime, Cocking says, Gabriella “is more seasonal and market-driven than it ever has been”—and has been attracting more praise and business as well. For the recipe opposite, Adrian Cruz, who has been with Gabriella for much of the past 15 years and recently returned as its head chef, highlights just a few simple ingredients to bring out the fresh flavors of our local bounty.

“The chicory greens are a cross between radicchio and bitter greens, and are pretty tough,” says Cruz. “They like hard weather.” Because of the durability of this cold weather lettuce, it doesn’t get damaged in the wet climate of late winter and early spring.

Amber Turpin has immersed herself in all things food since she was a child. Her latest endeavors are homesteading at her property in the Santa Cruz Mountains and launching Filling Station, a café and bakeshop on Santa Cruz’s West Side.