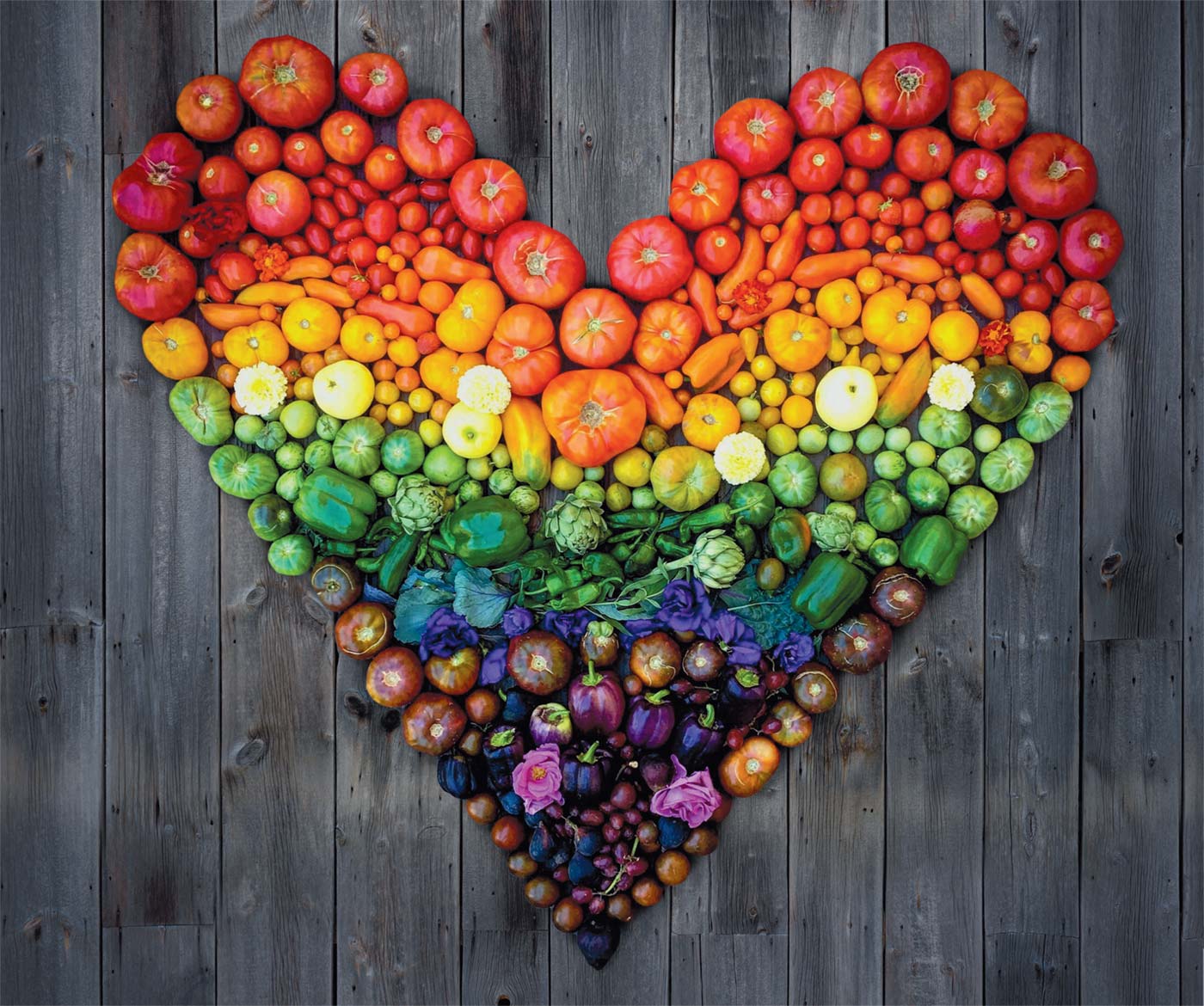 Fall is peak tomato season around the Monterey Bay

My love for tomatoes started when I was in elementary school. My greatgrandparents had a big garden at their desert home in Yucca Valley. I spent my summers helping them hunt and squish tomato hornworms, harvest tomatoes, eggplant and watermelon and eat fresh figs from the trees. Instead of the typical apple in my school lunch, I often got a big red and juicy beefsteak tomato. I ate it with gusto, while my classmates stared confused and poked fun at me. I remember enjoying it with little care about what they thought because it was delicious.

Twenty years ago, when I started Serendipity Farms I knew I had to find land that would be hospitable to my favorite summer crop. Once I did, I planted all kinds of unique and delicious heirloom varieties that eventually grew 8 feet tall and produced 50 pounds of fruit per vine. It was amazing to watch the tomatoes ripen into magical shapes and colors, hiding like Easter eggs under their leaves. For several years in the early 2000s, when organically grown heirlooms were uncommon, I sold 10 acres worth of tomatoes under Trader Joe’s label, as well as my own. We rode the heirloom wave until large commercial farms started planting them, lowering the price. We couldn’t compete because our harvest season in Carmel was too short to balance the costs of production. We still grow over 30 varieties of tomatoes, but only sell direct to customers at our Carmel farm stand and local farmers’ markets.

Tomatoes are a nightshade, botanically considered a fruit (a berry, actually) in the Solanacea family, which also includes peppers, eggplants, potatoes and tomatillos.

The ancestor of the tomato was a wild, pea-shaped fruit native to South America and domesticated by Aztecs before 500 BC. The Aztecs called it “tomatl,” which became “tomate” once Spain conquered the Aztecs. The Spanish brought it to Europe, where at first it was feared to cause toxicity and even death like its relative, belladonna, also a nightshade.

It wasn’t until the 17th century that tomatoes were grown and eaten in North America, likely brought over from the Caribbean. Thomas Jefferson also sent seeds back from Paris, where he tried the fruit, and by the mid-18th century, tomatoes were being cultivated on farms in the southeast.

But it was Alexander Livingston, son of a farmer with no formal education but a strong interest in seed development, who is responsible for the flavor and look of tomatoes we are familiar with today. He purchased 70 acres in Reynoldsburg, Ohio and started the Buckeye Garden Seed Co. There he took hard, sour tiny fruits and crossbred them until he produced large, sweet tomatoes, through the first tomato breeding program in the U.S. Livingston introduced the paragon variety in 1870. Five years later he unveiled acme, which became the parent tomato in all tomato development for next 25 years. Livingston’s ability to produce 30 superior tomato varieties resulted in half of the genetic material in circulation today. He is also responsible for making tomatoes popular with American cooks.

What other fruit defines the harvest season more than a tomato? Living on the Central Coast we have to wait a little longer for tomatoes to ripen than warmer counties, but I’m convinced our local tomatoes are some of the tastiest. They ripen slower over a longer period of time and therefore develop higher sugar content. There is really no comparison when it comes to perfectly ripe tomatoes bought directly from a Monterey Bay area farm.

Dry Farmed: Our cool summer weather allows farmers to dry farm thick-skinned tomato varieties such as early girl and new girl or momotaro—a Japanese variety that is both sweet and tangy. The thick skin on these tomatoes helps them handle the stress of not receiving water, which in turn makes them very sweet. Seedlings are planted and watered only enough to establish them, then the water is cut completely off for the rest of the growing season, forcing the roots to go deep. Dry-farmed tomatoes are mainly grown in cooler coastal areas and do best in soil that has some clay content, which allows it to hold water. They don’t produce as many fruits as irrigated tomatoes nor do they grow as large, but the flavor is outstanding. Because of their thick skin, they last a really long time; I’ve had them sit on my counter for two weeks and still look perfect.

My favorite way to enjoy dry-farmed tomatoes is to cut them in half, drizzle with olive oil, sprinkle with salt and roast at 200° F for about an hour, until they are caramelized and the juice has run off. Increase temperature to 275° F for last 20 minutes to brown around the edges. Pop these in a jar with olive oil, herbs and feta and use on everything or just eat straight out of the jar. When the tomatoes are finished, your jar of olive oil with herbs and feta will make an awesome dip for bread.

Romas: Another tomato with a cult following is the San Marzano, an heirloom variety originally grown in the volcanic soil of San Marzano sul Sarno near Naples, Italy. Those familiar with the San Marzano know this is the variety to look for to make great sauce with strong yet sweet tomato flavor and lower acid. They have few seeds, little juice and are very meaty. San Marzanos are the last variety to ripen, and they are determinate, which means they ripen all at once, so start looking for them at the farmers’ markets in late September. If you are lucky, you may also find yellow San Marzanos!

My favorite tomatoes for making soup are orange roma varietals, such as orange icicle or Italian gold. Simply cook down the tomatoes, add an equal amount of chicken broth and use an immersion blender to combine. Then cook for 20 minutes on medium, turn off heat and add za’atar and fresh basil. Top individual bowls with olive oil and salt. It’s simple, yet so good and great with a grilled cheese.

Cherry Tomatoes: Sungolds are still my all-time favorite cherry tomato. They are so sweet you can eat them like grapes and they make a great pizza topping. If you live in a place that does not get frost, often you can over winter this variety and keep it producing into the second year. Another favorite is the indigo kumquat, which is orange on the bottom with bluish shoulders and has the flavor profile of a plum, the texture of a tomato and a delightful tartness.

Heirlooms: Heirloom seeds are like antiques that have been passed down many generations through seed saving. Unlike hybrids, they have character in their shapely “flaws” and very distinct flavors and fascinating colors. Some of my favorites are pink berkeley tie dye, Aunt Ruby’s German Green, big rainbow, chocolate stripe, purple cherokee and prange brandywine. The purple varieties tend to be more smoky in flavor, while the green taste more cucumber-y and orange varieties are lower in acid and sweeter.

Growing heirloom tomatoes can be addictive. Just ask Gary Ibsen and Dagma Lacey of TomatoFest seeds, who have built their life around them. They produce 650 varieties of organically grown heirloom tomato seeds on a 20-acre farm in Hollister. Friends and family help them bring in the harvest. Then they squeeze each tomato variety into labeled buckets and let them ferment for a few days, which helps release the pulp from the seeds. Next, they strain, rinse and air-dry the seeds. They have a new line of dwarf varieties that can be grown in smaller containers for folks who live in apartments and want to grow a tomato in their sunny window. Ibsen’s favorite dwarf varieties are the uluru ochre, a blackish orange tomato, the purple-hued wild spud leaf and the beauty king—a striped red and yellow variety.

Please never put your tomatoes in the refrigerator! It changes their flavor and breaks down their cell walls. The best option is to keep them in a cool place or on the counter until you are ready to eat. They last the longest when kept between 55 and 60° F. I like to use a steak knife to cut my tomatoes, because it prevents them from being squished and losing all the juice, and it is easier to cut out the core with a serrated blade.

Choose smaller tomato varieties for coastal areas, and most any type for warm areas. Start tomato seeds in trays inside a warm greenhouse in March. Choose a spot in the garden with full sun and loosened soil. Plant the seedlings 18 inches apart in a row with at least 36 inches between rows, no earlier than May, but no later than June 15. Plant the seedling deep, as roots will develop on the stem when covered with soil, making the plant stronger instead of leggy. Top dress plants with plenty of compost or worm castings. Use tomato cages, or better yet stake your tomatoes and use twine to hold the vines up. Prune off excess lateral vegetative growth, leaving the flowers and continue to train and trellis the vine. If you live in a warmer place, you will need to prune less heavily to avoid sunburn on the fruit, but if you are on the coast you may remove more leaves to allow more sun in to ripen the fruit. Fertilize with a fish-based fertilizer and once flowers start to form, add potassium and calcium every two weeks. Water deeply and wait until you start to see leaves curl before watering again. This will encourage the tomatoes roots to grow deeper. Harvest when the tomato has turned color completely or harvest them green and make chutney or fried green tomatoes.

Cynthia Sandberg of Love Apple Farm has been growing heirloom tomatoes, selling her biodynamic plants and teaching gardening classes including “Tomato Masters” for more than 20 years. She has a plant sale in Scotts Valley every spring where one can pick from a large offering of tomatoes of all kinds, and is a great local resource for all things tomato.

Lisa Troutner, who took the tomato photos in this story, is a passionate farmer, with a wide range of interests. Whether it be cultivating exotic heirloom tomatoes, creating intricate harvest art, designing unique floral arrangements or distributing her treasured seeds throughout the U.S., she strives to produce quality and rare beauty in all of her work. Her love and energy for plants is affirmed by the incredible vigor, health and production found on her farms, and wherever she goes, her green thumb and a flourishing garden follow. More at carmelbellafarm.com

Tomatoes are a fruit that is great to preserve in many different ways. One can make straight preserved tomatoes, salsa, marinara sauce, chutney and juice, to name a few. Different tomatoes are a better fit for some preserves than others. Dry-farmed tomatoes are perfect for making tomato jam.

We often serve versions of this salad at Coast. My father always makes versions of these and refuses to set the table with a fork when he serves them. After marinating the sweet summer tomatoes and other veggies release their juice, making this salad-soup hybrid the perfect dish for a hot day, especially with a chunk of good bread.