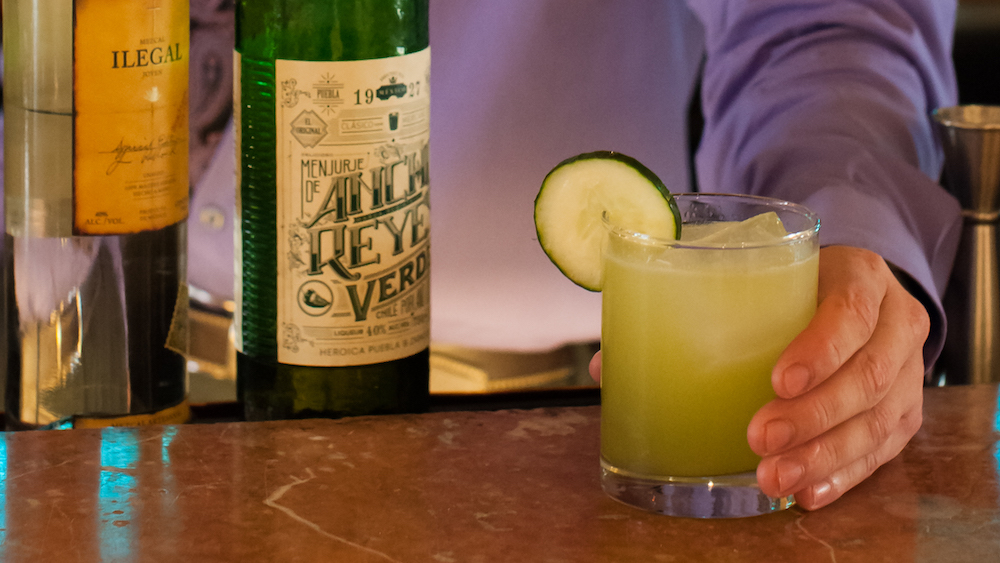 This young bartender is one to watch

You don’t meet many hardcore hospitality lifers who are 24. But here comes Johnathan Jeronimo, nearing a decade in restaurant and bar employment, 110% confident this is his career path, for the duration.

The bar manager of the historic Terry’s Lounge at Cypress Inn in Carmel speaks like a senator about the importance of hospitality.

“If you can grow while lifting up everyone else, that in and of itself is powerful,” he says. “It’s all about positivity, spreading the good vibes.”

For Jeronimo, the busier the better, which has made limited operations amid COVID-19 a challenge for his social tendencies.

“When it’s the busiest I come alive,” he says. “Some people dread that. Instead I’m excited about who I’ll talk to and who’ll want one of my drinks. I can really show them who we are.”

In one way his path in this direction was predestined. Or as he says, “It’s in my blood.” His father is a career server.

His restaurant resume reads like a local—and accelerated—tour de force. At 15, he was baptized by fast-paced, high-volume fire at Lalla Grill and Lollapalooza. Next he learned old-school white tablecloth service at Anton & Michel, mesmerized by the commitment of 40-, 50- and 60-something staffers. Former Bernardus Lodge food and beverage director Michael Marcy recruited him away and within three months Jeronimo rose to head busser there.

“With Bernardus I was getting to see ingredients and tasting menus few get to see,” Jeronimo says. “I knew I’d be in it for life: Bringing the money home was a big thing, but I learned that if you love what you do, the money will be there.

“The thing about food,” he adds, “is everybody eats. Why not make it special? That’s what they come here for. I want to make memories.”

When Marcy helped open Cultura comida + bebida, so did Jeronimo, taking reps as server and bartender. Between bar manager Josh Perry at Cultura and his next cocktail mentor, Francis Verrall at Mezzaluna, he had two award-winning minds to pick and two five-star work flows to emulate.

“They trained me to a T,” he says. “You can’t be sloppy. Even though they’re the best, there will still be moments when they’ll make a cocktail two times before they’ll serve it. That’s why they’re the best. They believe their work always needs to get better.”

That experience earned him the start at Terry’s. Once he landed, it didn’t take long for food and beverage manager Nancy Tran to spot something special.

“I noticed his talents when he first got here,” she says. “He was always very passionate, and then he started diving deeper and deeper.”

Terry’s is a throwback place with a hyper-loyal clientele that makes tweaking its classic cocktail formula fraught. But as Jeronimo started experimenting, Tran let the young fun run.

“I give Johnathan free range to express his creativity,” she says. “I think that he’s been able to concoct some amazing cocktails that not only satisfy the palate of our older clientele, but those who don’t quite know what they’re looking for.”

As she readied for her sommelier certification, Tran invited Jeronimo to sit in on tastings to expand his palate. Flash forward to the present and he’s going for his own certification. Partly because of its wine program, he took a second job at Michelin-starred Aubergine as a dining room attendant.

“If you’re the smartest person in the room, you’re in the wrong room,” he explains.

One of his latest cocktails was inspired by a prodigal son-style return to his parents’ native Oaxaca, where an aqua fresca prepped by his abuela inspired The Deadwood.

“I was a caterpillar when I started,” he says. “I’m turning into a butterfly and I love it.”

Jeronimo says the primary purpose of this cocktail is to up the brightness mezcal has to offer while adding flavors that mate with its rich smokiness.