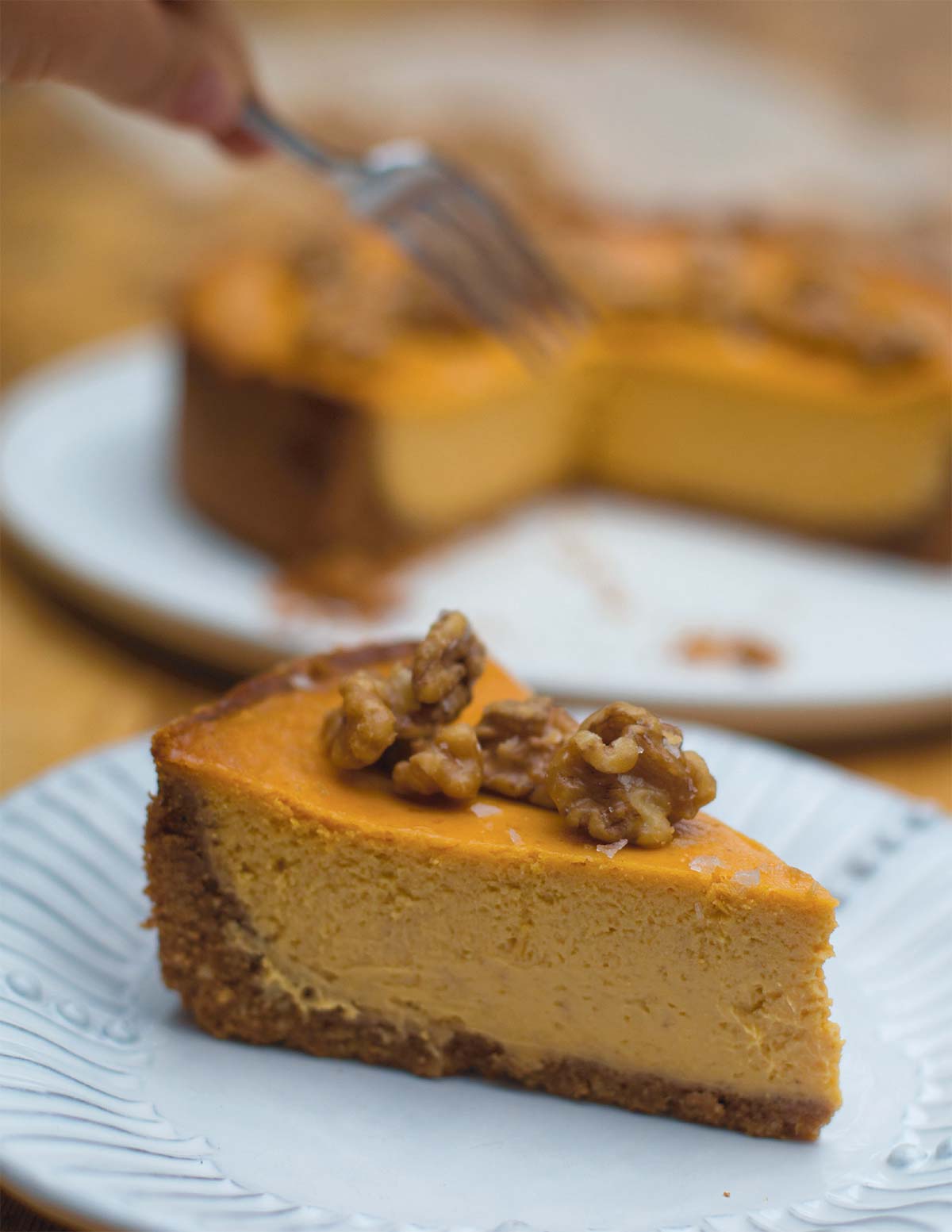 The thing that’s always bothered me about pumpkin pie is the absence of a true pumpkin flavor. The spices that characterize the pie—nutmeg, cinnamon, allspice and ginger—are so overpowering that one can scarcely taste the pumpkin at all. This pumpkin cheesecake foregoes any spices at all, allowing the true heroes of the dessert— the pumpkin, maple and walnuts—to stand on their own. An extra thick walnut and graham cracker crust and a maple walnut topping ensure that each piece of cheesecake delivers a distinct walnut crunch.

To make the crust: Add graham crackers to a food processor and process until they have turned to the texture of sand. Add walnuts, brown sugar and salt and pulse 15–20 times, until walnuts are about the size of peas. Pour in the butter and process for about 20 seconds, until combined. You may need to scrape the sides and bottom of the food processor to make sure everything is combined.

Dump the mixture into a 9-inch springform pan. Using a drinking cup, pat down the crust starting in the middle, then working your way out to the sides. The crust doesn’t have to be perfect on the sides, but it should come up to about ¼ inch from the top.

Place the springform pan onto a baking sheet and bake for 10–12 minutes, until the top of the crust is starting to brown. Remove from the oven and allow to cool completely. Lower the oven to 300° F.

To make the filling: Wipe all of the crumbs out of the food processor and add the cream cheese and sugar. Process until smooth and fluffy, about 1 minute.

Add the pumpkin, maple syrup and vanilla extract and process for an additional 20 seconds, until combined. Add one egg at a time, and pulse three times to incorporate it before adding the next egg. It is very important not to over-mix when adding the eggs.

Pour the mixture onto the cooled pie crust. Bake on the middle rack at 300° F for 2 hours, then turn the oven off and leave the cheesecake inside to cool for at least 3 hours. After 3 hours, refrigerate for a minimum of 6 hours before serving.

To make the maple walnuts: Heat maple syrup in a small pot over low heat until it bubbles. Stir in the cornstarch, then remove from heat. Stir in the walnuts and turn to coat. Spread them out on a piece of parchment paper, sprinkle with sea salt, and allow to cool and harden into praline.

Store nuts in an airtight container at room temperature until ready to serve, then sprinkle over the cheesecake. Serves 8–10. 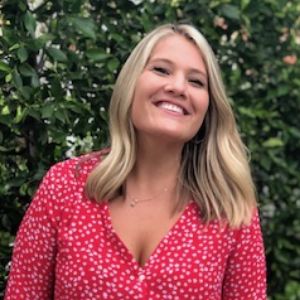 Carmel resident Caroline Chambers grew up in North Carolina, where she was raised on the robust flavors of the South. She has owned and operated a farm-to-table catering company in San Diego and has worked as a recipe developer and stylist for publications and brands including The New York Times, Robert Mondavi Wine, Food Network and MagicChef. Her first cookbook, Just Married (Chronicle Books), was published in October 2018.