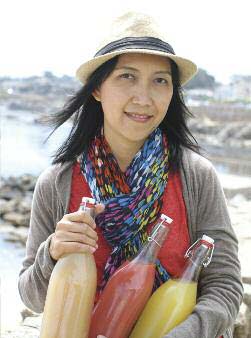 Soft drinks re-imagined by a mom All around the Monterey Bay area, consumers are gradually getting wise to the $74.2 billion commercial soda industry and its unwholesome lists of ingredients, like high-fructose corn syrup, caffeine, phosphoric acid, sodium citrate, potassium benzoate and glycerin. But are there more healthy sodas out there?

Kate Appel uses organic fruits, herbs and natural sweeteners— and refuses to call her product soda. Last year, the Pacific Grove mother of triplets (all boys, age 7) started her own “sparkling fruit drink” company called 3 of a Kind, a nod to her sons and to her simple list of three ingredients.

“I didn’t want to associate my product with soda,” she says. “What I’m doing is something so different.”

It all started after she tried (and ultimately failed) to keep her sons away from the unhealthful duopoly of Coca-Cola and Pepsi. But one day they came home from a birthday party hopped up on soda and cake, and she headed to her kitchen to create something better.

Appel came to this country from Thailand in 1996 to study computer graphics (eventually marrying Tim Appel, at the time a student at the Defense Language Institute). All throughout her native land are small stands along the roadsides with transparent vessels of exotic fruit drinks, effective thirst quenchers during the hot months.

So Appel began experimenting with different flavor combinations, starting with apple juice and limeade, calling the drink Appelade after her family name. Then she grew more creative, using ginger root, cloves, fresh berries, basil and natural sweeteners such as honey or maple syrup. The next step was carbonation, and she purchased a Soda Siphon, a modern-day seltzer bottle that dispenses bubbly beverages.

After much experimentation on her kids, her neighbors and the UPS guy, Appel narrowed down her flavor profiles, secured a commercial kitchen (thanks to her friends at Siamese Bay Restaurant in Monterey) and purchased soda kegs to store her carbonated creations.

You can find her at the Tuesday farmers’ market on Alvarado Street in Old Monterey, and at the Independent Marketplace the first Thursday of each month ($4 for a 12-ounce serving over ice, or buy a refillable bottle for $5 and take the drink home).

“I know Kate doesn’t like to use the word soda, but it’s great to see craft soda making a comeback,” says Todd Champagne, manager of the Independent. “She has created a healthy carbonated beverage, and her flavors have been really inventive. People have responded well to her product.”

Her most popular drinks? Strawberry and basil is a huge hit, and lemon-lime and cilantro went fast (especially at home with her husband’s adult version that included tequila).

“I’m so happy people like what I’m doing,” says Appel, “because I’m having so much fun doing it.”

Appel’s methods are a closely guarded secret, but she says that making your own carbonated fruit drinks at home is easy, even without the expensive equipment. Just use fresh fruit, bottled sparkling water and a lot of imagination. She’s shared a simple recipe below.

Ray Patterson is a freelance writer based in Monterey.