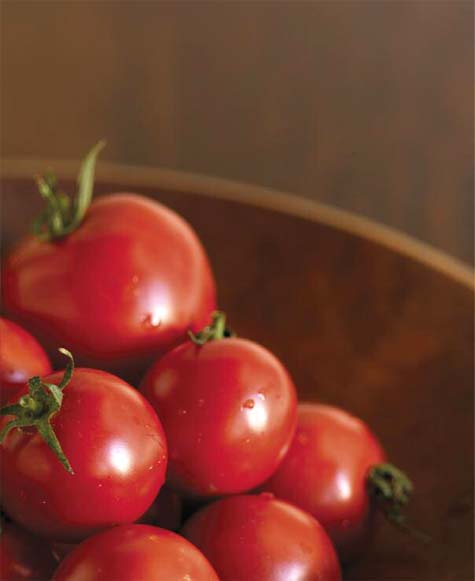 Note: Fish species marked with # are rated “good alternatives” by the Monterey Bay Aquarium’s Seafood Watch program, meaning they are considered sustainable with reservations due to concerns about the health of their habitats or how the fish are caught or farmed. All other fish listed here are considered “best choices” for sustainability by Seafood Watch.

*September only
**Only through October
***October and beyond
****November only

THE CULT OF THE DRY-FARMED TOMATO

Maybe you’ve accidentally forgotten to water your tomato plants when you left for a couple of weeks on vacation and the weather turned scorching. But where you expected to find dead tomato vines, you instead found curling leaves begging for water and beautiful, ripe fruit. Or perhaps you found a volunteer tomato plant, unnoticed yet thriving in your compost pile. Either way, the neglected tomato is smaller, with a noticeably thicker skin, but it has the sweetest, most amazingly condensed flavor you’ve ever experienced in a tomato—much tastier than those you watched with a careful eye and watered regularly. Without deliberately trying, you have happened upon dry-farmed tomatoes, which have attracted something of a cult following among Central Coast farmers, chefs and home cooks.

The technique is not unlike methods for dry farming wine grapes and olives. The theory is that when a plant is stressed by having water withheld from it, the fibrous roots go deeper in search of moisture, creating a stronger root system, and the rest of the plant’s energy focuses on reproduction—creating in the process richly flavorful fruit.

Dry-farmed tomatoes are one crop in which coastal Monterey Bay farmers have captured a niche market because our cool soils are able to absorb enough winter rain to sustain the plants through fall. And that means that when the warm-season crops of our inland neighbors come in, we coastal farmers have something much better than cabbage to offer on our own market tables.

The most common seed variety used to dry farm tomatoes is the Early Girl, a reliable and prolific, bright-red hybrid tomato that reaches the size of a golf ball when dry farmed. Unlike heirlooms and their wildly varied colors and shapes, Early Girls are fairly unremarkable in their appearance—except for their distinctively perky round shape.

Early Girl seeds are indeterminate, meaning the plants flower and fruit over a long period of time instead of all at once. This is important if you want to harvest tomatoes throughout the season; determinant seeds are only useful for machine-harvested tomatoes meant for ketchup or sauce.

This is one tomato variety that doesn’t need summer heat in order to be tasty, and a dry-farmed tomato gives a heat-loving heirloom a run for its money in the flavor department. You might think a dry-farmed heirloom would make the ideal tomato, but most heirlooms are too water loving and too thin skinned for dry farming. Two exceptions are Stupice and Punta Banda, which both perform well when dry farmed, although they yield smaller fruit than Early Girls. Stupice hails from the Czech Republic and is a heavy producer of bright-red cluster tomatoes. Punta Banda is a meaty red tomato originating from Baja, California, which produces well in poor soil with little heat or water.

Momotaro, like the Early Girl, is a hybrid variety and also thrives when dry farmed. The variety, owned by the Japanese Takii Seed Co., is named for a hero in Japanese folklore and offers a balanced sweet-to-acid ratio and good disease resistance.

I’m personally hopeful that another variety will one day measure up to the Early Girl, as the plant has been owned by Monsanto Corp., the genetically engineered seed giant, since 2005, when Monsanto purchased Seminis Inc., a company that also held the rights to many other common agricultural crops. (The Early Girl is not genetically altered itself, however.)

“The sad reality is that Monsanto owns many of the best varieties out there,” says Christof Bernau, garden manager at the UC Santa Cruz Center for Agroecology and Sustainable Food Systems. CASFS has trialed many alternatives to the Early Girl, including the Cherokee Purple and Three Sisters heirlooms and the New Girl hybrid, all of which have been good producers, but so far, Early Girl remains the most well adapted and productive choice for the microclimates of the Central Coast.

So for now, the Early Girl is embraced by many local organic farmers, who find it does well given our area’s marine climate, warm sun and, often, water-retaining clay subsoil, Bernau says. What’s more, dry farming is well suited to organic farming in general, because organically enhanced soils are high in organic matter and tend to retain water better, thus conserving water and reducing soil erosion— two goals of any environmentally minded farmer.

To grow dry-farmed tomatoes, seedlings should be watered as usual until a strong plant develops and is ready to go from the transplant tray into well-prepared, nutrient-rich coastal soil, which typically has a high water content from winter and spring rains. Thereafter, the plants are watered only until they begin to set fruit, or when extremely hot temperatures would otherwise kill them.

There are a few drawbacks to dry farming tomatoes: lower yield, smaller fruit and calcium deficiency. The calcium shortage can in turn lead to blossom end rot. Still, the increasing demand for these shiny little jewels generates higher prices for the farmers who grow them, balancing out the drawbacks.

Dry-farmed tomatoes are great for any dish that would be enhanced by an intense tomato flavor. I’m a fan of halving the tomatoes and roasting them with a sprinkle of Kosher salt until they are partially dry. I use them for just about anything—tossed on salads, made into a spread by mashing garlic and herbs into them or blended into personal- size soups with some cream, sautéed onions, thyme, oregano and a drizzle of balsamic vinegar.

Jamie Collins of Serendipity Farms has been growing organic row crops at the mouth of Carmel Valley for more than 10 years. She distributes her produce through a CSA, u-picks and farmers’ markets.