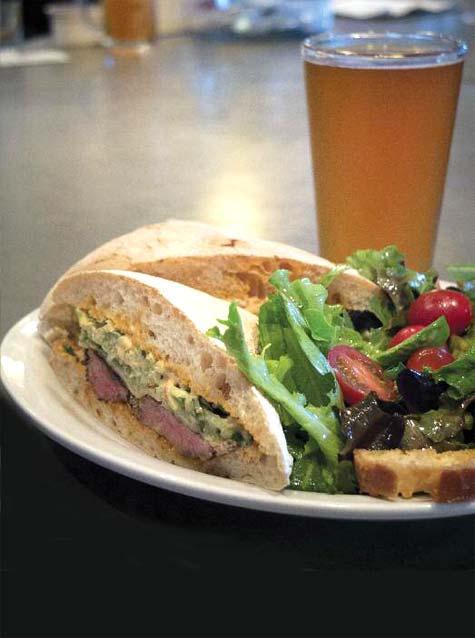 Santa Cruz Mountain Brewing:
Not your average sandwich and a beer.

“I love beer and I love food,” says brewer and beer evangelist Kevin Clark. Reason enough for him to start a popular monthly series of beer and food-pairing dinners at Peter B’s Brewpub in Monterey, where 30-year-old Clark reigns as brewmaster. Other local restaurants—like Point Pinos Grill in Pacific Grove—have also tuned in to our growing passion for craft beer and started their own regular pairing dinners. At the same time, places like Santa Cruz Mountain Brewery are getting into food, both pairing and cooking dishes with beer. And the fall calendar of beer and food events is about to get busier, with Monterey’s new Bacon, Blues & Brews joining the Monterey Beer Garden and Santa Cruz’ Sausagefest.

It was probably just a matter of time before beer lovers and foodies decided to get together. But experts say craft beer goes especially well with food, and its growing popularity is a real bright spot for the brewing industry. While beer consumption declined nationally in 2011, the Brewers Association says craft beer grew to 5.7% of total consumption, surpassing 5% for the first time ever. And California ranks No. 1 in the nation with nearly 300 microbreweries producing endless local varieties of lagers, ales and stouts.

The floral and fruity characteristics of hops used in craft beer are one reason it pairs better with food than your average can of Bud. “The kind of hops makes a big difference,” says Clark, who has traveled the world, sampling brews. “In New Zealand, hops are bright and citrus-y; U.S. hops are big, full and in your face, just like with wine; and European hops are warm.”

Unusual seasonal ingredients that often go into craft beer are also a factor. For example, Clark found that the red raspberry ale he made last summer paired really well with raspberry-infused cheese. A pumpkin ale he is getting ready to release in October might be paired with pie.

When it comes to food that pairs well with beer, “Bacon is a nobrainer,” says Dory Ford, executive chef at Point Pinos Grill and AQUA TERRA Culinary. “You could just put a heap of bacon on the table and drink your beer and eat the bacon,” he says with a laugh. Fortunately, his beer-pairing dinners and those prepared by Chef Jason Giles at Peter B’s are a lot more sophisticated. They start with the lightest brews to accompany appetizers and flow to medium-bodied ales with the main course, followed by heavier, richer stouts at the end of the meal—sometimes with dessert. “Pretty much anything that is crispy, fried, golden brown or rich in umami tends to go well with beer,” says Ford, who once created a gourmet pairing dinner, working different cuts of pork into five delicious courses, ending with bacon, chocolate and cherry bread pudding with candy cap mushrooms.

After those criteria are met, the search is on for nuances in the beer that can be reflected in the food so that the pairing brings out the best in both the drink and the dish.

The pairing Ford is most proud of was a savory beef pie, made with braised beef cheeks, mirepoix, gravy and mushy peas, and served with malty, medium-bodied Black Prince Porter from English Ales Brewery in Marina. “We got that one just right,” he recalls.

Rich stouts are often paired with desserts that play up their subtle chocolate or coffee notes. Peter B’s is working on Coffee Stout in collaboration with Acme Coffee Roasting in Seaside. At the beerpairing dinner, look for it to be served, perhaps, with Chef Jason’s espresso chocolate ice cream torte.

Coffee Stout may pair better with dessert than breakfast, but you might try wheat beer in the morning.

“You could have a piece of toast, but wheat beer goes really well with omelets,” says Clark, who spends all day sampling the brews he is creating. In fact, wheat beer is used as a stand-in for crackers or bread in many successful pairings.

The only hard and fast rule in beer pairing is to avoid combining bitter and spicy tastes. Drinking bitter beers like IPAs with spicy food is like adding fuel to a fire. Try a malty brown ale instead because sweetness counteracts spiciness.

At beer-pairing dinners at both Peter B’s and Point Pinos Grill, guests sit at long communal tables that promote conversation. Drinking beer is a social activity that puts everybody in a friendly, party mood. It is a casual, blue jeans-clad crowd. Dinners are reasonably priced and sell out quickly.

“Enjoying, savoring and learning about beer is not a bank buster,” says Ford. “In these tough economic times, I know people who used to be wine connoisseurs who have switched over to beer.” While beer has traditionally been a man’s drink, that too, is changing. “Women have started to realize that beer pairs well with food and has a lot of different flavors and intricacies,” says brewer Emily Thomas, who owns Santa Cruz Mountain Brewing with her husband, Chad Brill.

She and fellow SCMB brewer Nicole Todd are among just a handful of women brewing craft beer in California and only about 100 nationwide. “Women have a different style,” she says. “We are more interested in different herbs, tastes and food, and we take the most risks with flavor.”

Thomas prepared a pairing dinner for the Squaw Valley Institute at Lake Tahoe last month, using beer as much as possible in preparing the various courses—from beer-braised short ribs to a flourless chocolate cake made with stout. (See recipes on p. 43). And last February, for the “Twisted Tasting,” a mind-bendingly creative beer-pairing event that SCMB organized with a challenge for Santa Cruz’s inventive cooks and brewers to come up with the wildest creations possible, Thomas brewed a beer with maple syrup, dates and smoked pig’s ear (one per gallon). To pair with it, SCMB concocted beer-brined pickled eggs with hops salt and chipotle-bacon chocolate.

This fall, SCMB plans to brew 10 kegs of fresh Hard Apple Cider using organic local apples. In the realm of food, sausages made with beer, including a smoked IPA sausage and a chili beer sausage, are expected to be a highlight of the annual Sausagefest sponsored by SCMB on October 6. Please see box on p. 41 for more information.

In March of next year, Santa Cruz Mountain Brewery will open the highly anticipated Brewer’s Kitchen restaurant in Felton. Inventive, beer-inspired dishes made with local ingredients will be paired with SCMB’s full line of ales and stouts on tap in a fun, relaxing atmosphere.

And that’s all probably just the beginning. Stay tuned.

You don’t need to go to Munich to enjoy some boisterous beerfests this fall.

Monterey Beer Garden, September 8: Peter B’s hosts members of the Bay Brewers Guild in the Memory Garden next to Monterey Custom House Plaza. Chef Jason Giles pulls out all the stops with a bang-up barbecue, and 13 brewers pour their own beers from noon to 4 pm. Live music and all you can eat and drink for $40.

Bacon, Blues & Brews, October 27: Featured local chefs will offer their best bacon dishes to go with local craft brews and live music at this new event at the Monterey Fairgrounds. Organizers intend to make the event both upscale and accessible by offering a variety of ticket options ranging from $20 to more than $100.

Beer-pairing dinners, Monthly at Peter B’s in Monterey and every other month at Point Pinos Grill in Pacific Grove. Check Facebook for upcoming dates. Also watch for other restaurants to introduce their own beer-pairing events.