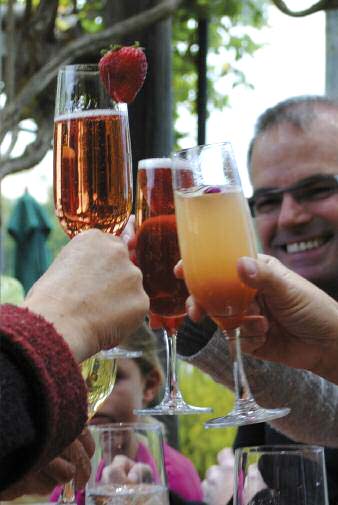 COSTANOA LODGE,
EARTHBOUND FARM
AND THE RESTAURANT
AT VENTANA

BY CAMILLA MANN AND SARAH WOOD

This past spring and early summer, Edible Monterey Bay joined forces with three off-the-beaten-path culinary gems to host pop-up meals that included such adventures as an informative hike, an intriguing farm tour and a chance to camp at an ecoadventure resort. Each gathered locavores from around the region in beautiful settings, but the meals themselves stole the show. Happy hikers: enjoying the terrace at the Restaurant at Ventana.
Photo by Camilla M. Mann

THE RESTAURANT AT VENTANA,
VENTANA INN AND SPA, BIG SUR

Guided hike and pop-up brunch, May 26

Edible Monterey Bay’s May pop-up brought me to the Ventana Inn and Spa for a hike and a brunch. Gathering in front of The Restaurant at Ventana, our group of culinary adventurers chatted amicably before heading out with Stephen Copeland, a long-time Big Sur resident and owner of Big Sur Guides. Part naturalist and part local historian, Copeland regaled us with stories of Hatfield and McCoy-style feuds between Big Sur landowners and reminisced about Lolly Fassett, who started the Nepenthe Restaurant after nurturing the local community nightly with her roasted chicken and stuffing.

As we wound our way along the trails, Copeland discussed how younger redwood trees create tight rings around their parents. He explained how the Native Americans viewed the redwood rings as sacred circles of life. At one point, our group stood in the center of one of these circles. Surrounded by 16 giants, we inhaled the citrusy scent from the duff beneath our shoes, listening to the energetic chirps of the wood sparrows.

With stomachs rumbling, we were guided back to The Restaurant at Ventana under an arbor embraced by gnarled vines and the heady fragrance of honeysuckle. First task: to select one of Ventana’s unique libations. There was the de rigueur Bellini and ubiquitous Mimosa, but it was the more innovative offerings that intrigued me. I vacillated between the St. Germain Royal-Roederer Brut with St. Germain elderflower liqueur, and a lime wheel—and the Hair of the Dog Punsch, a lemon-infused Zaya rum with spiced black tea.

I opted for the punsch—whose seemingly errant “s” is not actually a typo—the name of the Nordic drink that inspired the cocktail. Though I was initially reluctant to order it because rum cocktails are notoriously syrupy, the name was irresistible. The concoction was spicy, slightly bitter and served hot—a vivid contrast to the chilled, effervescent St. Germain that I sampled by sneaking a sip from my friend’s champagne flute.

Clinking our glasses amid celebratory toasts, we considered the entrée offerings. Chef Truman Jones had fashioned a generous menu with everything from chicken enchiladas to a classic Caesar salad and homemade granola to a Big Sur burger.

Eggs Benedict is my favorite, so the choice was simple. Toasted English muffins were topped with steamed spinach and pillows of perfectly poached eggs. The applewood- smoked pork loin was crispy enough to lend texture to the mouthfeel, yet soft enough to complement the silky eggs. And I was grateful that the Hollandaise sauce added lemony flavor without drowning the dish.

While I didn’t taste any of the other entrées, the empty plates that lined our table by the meal’s end were a good sign that the other choices were delectable, too.

Table chatter ran the gamut from local food events to recipes and culinary processes. We imagined how we could use the sprigs of California sage that Copeland had plucked for us. I’m considering a roasted chicken with stuffing in Lolly Fassett’s honor: leeks, celery, rye bread, California sage and lots of butter. —CM I’d never been to Costanoa Lodge until Edible Monterey Bay’s pop-up there in June, but even before I’d arrived, it was easy to vow I’d return. Costanoa is a 25-minute drive up Route 1 from Santa Cruz’s Westside, and just getting there offers jaw-dropping views of small coastal farms, plunging cliffs and beautiful beaches.

By the time I passed the sign for Año Nuevo State Park and turned onto Costanoa’s eucalyptus-scented access road, the stresses of my day were in perspective, and I was ready to take in the natural beauty of this ecoadventure resort.

My destination was Costanoa’s elegant yet rustic Cascade Bar and Grill. Our guests soon arrived from as far as San Jose to the north and Monterey and Carmel Valley to the south, and we got to know one another over a glass of sparkling wine from Bonny Doon Vineyard, which provided generous pairings for each of the meal’s five courses.

When it was time for dinner, we were offered either a tangy-sweet, vegetarian Peruvian quinoa that was filled with Costanoa’s own vegetables, or a fillet of tenderloin.

Hunter Brawley, who has since taken over as the restaurant’s chef, has left the delicious vegetarian quinoa on the menu, and has also replaced the fillet and other heavier dishes with lighter, more seasonal fare, including much more fish. The restaurant is also incorporating into its meals as much local, organic and sustainable ingredients as the restaurant can grow in its own biodynamic garden and procure from local fishermen, farmers and food artisans. (Harley Farms, which provided the chèvre for our salad and Swanton Berry Farm, which supplied the strawberries for our shortcake, are located just up and down the road, respectively.) The menu spans both fine dining and comfort food, and the new seafood entrées, which I tried on a later visit, included a rich cioppino as well as succulent halibut and scallops. The menu also included a number of local, biodynamic and sustainable wines.

“When you come here, you’re actually going to get a taste of here,” says Brawley, who trained in both classic French-Southern cuisine and cooking with fresh, local ingredients under Linton Hopkins and other highly regarded Atlanta chefs, adding that the restaurant is attracting more diners from around the region, who are just coming in for dinner, rather than to stay over. “I want people to be able to come away and have a Big Sur type of experience—get away, enjoy nature and also have a great dining experience.”

The night of our pop-up, most of our guests took advantage of the chance to stay over in one of Costanoa’s tent bungalows. When we gathered for dinner, we swapped ideas for exploring the area. One family had already been to Harley Farms, where they’d introduced their preschooler to alpine goats and the huge array of artisanal cheeses that the dairy puts out for its visitors to taste. A couple of moms had just arrived without their kids to celebrate the start of summer, and they were looking forward to hiking.

By the evening’s end, I was sad that I couldn’t stay over myself, but as I enjoyed the stunning views on the drive home, I began to plan my return. —SW “Farm Stand” is really much too modest a term for Earthbound Farm’s beautiful and multi-faceted Carmel Valley location. In fact, just as Earthbound has over the last 28 years become the country’s largest organic grower, helping provide much-needed access to fresh, organic food across the U.S., so too has the Farm Stand grown over the last two decades into a beloved Carmel area institution, offering both a reliable source of fresh, organic food and a connection to where that food comes from.

Over time, the Farm Stand has expanded to become an event center that, with its demonstration farm and its gardens and organic kitchen, provides everything from bug walks to cooking classes, as well as an organic grocery, garden center and organic café. What’s more, for the pop-up dinner that Earthbound founders Myra and Drew Goodman and Edible Monterey Bay hosted in July to honor the 20th anniversary of the location, Earthbound opened its new gardenside, open-walled event space for a public dinner event for the first time.

The evening benefited Ag Against Hunger, the Spreckels-based organization that has helped feed millions of hungry people by collecting surplus produce from Monterey Bay area growers and delivering it to local food banks.

Fittingly, the evening began with a farm tour. Taking along our delicious glasses of wine—a Chenin Blanc donated by Heller Estate Organic Vineyards and a Chardonnay from Bernardus Winery—we followed behind Janna Jo Williams, the Farm Stand’s enthusiastic resident farmer and event organizer.

Along the way, we savored tiny glasses of chilled curried carrot and coconut soup and learned about such things as how to grow a real corn maze, what companion planting is and how fresh lemon verbena leaves can be used for an impromptu natural perfume. But the highlight of the evening was the all-organic dinner. Sarah LaCasse, executive chef of the farm stand’s 10-year-old organic kitchen, went all out.

The six savory courses included fennelrubbed pork tenderloin with succulent grilled figs and a rosemary, garlic and lemon roast chicken served with farro and smoked tomato–basil butter. Four bright, inventive and hearty salads were enough to make any vegetarian foodie swoon. A wild rice and raspberry salad and a twist on a classic salade Nicoise were both delicious surprises.

Earthbound began as a 2.5-acre Carmel Valley raspberry farm, so it was appropriate that after dinner, we headed into the Farm Stand’s raspberry patch to pick fresh raspberries for miniature strawberry-raspberry shortcakes—one of four different berry desserts that provided the celebration’s finale.

What each course had in common was a reminder of how much better food is when it is made with nutrient-rich, fresh, organic ingredients.

Before the night was over, the Goodmans spoke about the history of both Earthbound and its Farm Stand, recounting that they started the Farm Stand two decades ago to maintain a connection to the Carmel Valley community after Earthbound relocated its head offices to Watsonville and later, San Juan Bautista.

“Twenty years ago, we never would have dreamed that Earthbound Farm or organic food would have achieved the popularity that exists today,” Drew Goodman said. We’re glad they have. —SW