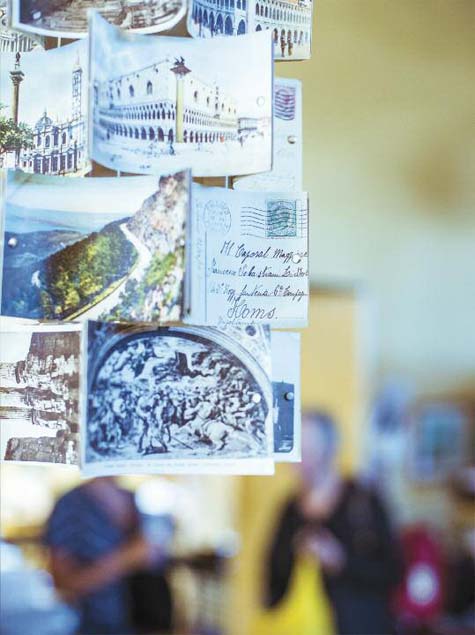 Chef Katherine Stern was on a backpacking trip around Europe when she fell in love with Italy. Soon afterwards, she fell in love again. “I met my husband in a castle,” she says of the fairy-tale romance that began in southern Tuscany at the Castello di Potentino. She was a volunteer, picking grapes and olives in exchange for room and board. He was a Scottish carpenter working to restore the medieval palace. So she decided to stay on for a few more years, learning everything she could about Italian food in the meantime.

Having trained at the Western Culinary Institute in Portland, Katherine first worked abroad as chef for the owners and work crews at the Italian castle, which hired her after realizing that their fruitpicking volunteer was a chef. She then attended a Slow Food academy and completed several stints at hill town restaurants, made cheese in Abruzzo and ended up working at the two-Michelin-star Caino restaurant in Montemerano—another Tuscan hill town not far from the castle.

Restaurateur Patrice Boyle, who owns both La Posta and Soif in Santa Cruz, felt the pull of Italy at an earlier age. “My fascination started in high school when I fell in love with Italian shoes,” she says. “Then in college I was a music major and discovered opera. Later I found out about Italian wines.”

Boyle owned a winery in Paso Robles in the 1980s, then left to work as general manager for Bonny Doon Vineyard—a job that allowed her to travel the world trying fine wines. Ten years ago, she opened Soif restaurant and wine shop to showcase the lesser-known European wines she loves. But she longed to open a food-centric Italian place, so in 2006 she started La Posta, in a building that was once a post office for the Seabright neighborhood near the yacht harbor. The two women met three years ago, after La Posta’s first chef quit. “Finding Katherine was another piece of unbelievably great luck,” says Boyle. “She is a serious person who has very clear ideas about how things should be, and I had a quick affinity for her.”

At just 5’1” and always sporting her short ponytail, 34-year-old Stern could easily be mistaken for someone half her age. But on her first night of trying out at La Posta, she arrived in her chef’s whites with her own knives and walked right into a kitchen full of men, taking charge with gentle, small suggestions.

She is one of the only female head chefs in the Monterey Bay area but cannot understand why. “It’s a mystery why there aren’t more women head chefs. I’ve never felt discriminated against, but the environment might be challenging for some women. It’s fast paced and you can’t let things affect you too much. There are going to be a lot of things said. You have to be pretty tough.”

Chef Katherine Stern with her herbs.

She also thinks the female cooking style is a bit different from men’s. “It’s calmer food; sometimes there’s a lot more ego in male food,” she says. “For example, I feel absolutely fine with a dish that only has three ingredients, letting those ingredients speak and not feeling like I have to add more. But some people want to throw lots of things into a dish, and that masks some of the flavors.”

Boyle says she had no apprehension about hiring a petite young woman to run the kitchen. In fact, the front-of-house manager at La Posta, Sarah Simms, is also a woman. “I didn’t plan it. That’s just the way it worked out,” she says.

But she agrees with Stern that the role of head chef is not for everyone.

“Restaurant work is hard. It’s hot, close and heavy. You’re always dealing with the public, which can be unpredictable, and often there is conflict. Rough and tumble can happen.”

But not only does Stern love her work, she also seems fully at ease. Watching her in action makes you easily imagine that she’s channeling a sprightly little Italian grandmother.

In the long, narrow kitchen at La Posta, Katherine exudes a sense of calm under pressure. On a recent Friday night, orders started pouring in at 6pm. She studied them carefully, patting beads of sweat from her upper lip with a kitchen towel. She then turned to the stove, tossing a skillet of pasta, spinach and sugar snaps over the flames before adding a touch of mint and crème fraîche.

To her left, Ruben Serna assembled pizzas, while his brother Rodrigo shaved thick slices of summer squash and mixed them with fennel, purslane, pine nuts and vinaigrette for a salad. A fourth cook, J.J. Gonzales, filled in as needed, and they danced around each other without missing a beat, sliding plate after plate over the marble serving counter.

The food that La Posta’s kitchen turns out is simple, yet elegant, with a strong Italian sensibility. Katherine makes everything fresh daily, including homemade pasta and charcuterie. The menu changes all the time, depending on what strikes her fancy on twice weekly trips to the farmers’ market—in downtown Santa Cruz on Wednesdays and at Cabrillo College on Saturdays.

“In Italy, everything is very local. They only use what is available to them,” she explains. “We were living only an hour from the sea, but they didn’t eat fish. You only got meat.

“So I feel like I am doing the same thing, using what is available locally, and if it is not a traditional Italian item, that doesn’t matter because we are in California,” she adds.

The 55-seat dining room at La Posta echoes the simple Italian flair of its food. It’s reminiscent of a bustling, 1940s-era trattoria, and the sounds of happy diners bounce off yellow, Venetian-glazed walls as do classic jazz tunes from the stereo. Sepia-toned photos of Italy lean against the walls. Simms, the manager, dresses in vintage chic with fishnet stockings.

The only reminders that it once was a post office are three rustic redwood posts that hold up the roof and whimsical chandeliers made of old travel postcards hanging over the 6-seat bar. My favorite dish on that busy Friday night was smoked black cod salad, with peas, fava beans, pickled carrots and fingerling potatoes— a creative pairing of sweet, sour and smoky flavors, along with the absolute freshness that favas bring to the dish.

We also tried Katherine’s tasty and healthy version of lasagna made with leaves of an old English herb called lovage, chicken and summer squash. Among the gourmet pizzas available was one made with nettles, mozzarella, artichokes and Cerignola olives and another featuring summer squash, squash blossoms, Fontina cheese and prosciutto. She supplements farmers’ market fare with organic produce delivered by local farms, including Happy Boy, Freewheelin’ Farm and Tierra Madre. Forager Freddy Menge supplies mushrooms in season, as well as rare varieties of apples, currants and sour cherries. Free range meats are sourced at Fogline Farm in Soquel, and fish is caught sustainably. There is a garden box growing culinary herbs by the kitchen’s back door and a small chicken coop with three old hens, which stopped laying eggs last summer. Stern is looking for a home for them and has no intention of putting them in a soup.

La Posta just started its own kitchen garden, shared with Soif, in a large backyard on the Westside of Santa Cruz. A fourth woman is in charge, farmer Alice Lee, who also manages the garden at Main Street Garden Café in Soquel. She already has started planting winter greens and herbs for the two restaurants. Katherine is looking forward to having a steady supply of hard-to-find edibles—especially red frill mustard, which will be debuting on the menu this winter.

Although deeply influenced by her time in Italy, Stern is originally from Los Gatos and went to Campbell High School. Her father was in the wine business and introduced her to fine dining at an early age. “I remember going to Café Beaujolais in Mendocino and being very excited about ordering acorn squash soup because I thought it was made with acorns,” she says. “I was always interested in trying out new things, and I was always hungry.”

She spent a year in college but dropped out and took a shot at culinary school. “I never loved the academic environment, but culinary school was exciting and it was like, ‘Oh! This is what I should be doing.’” On graduating, she worked at the Kimpton Hotel Vintage Plaza’s Pazzo Ristorante in Portland and spent two years at Gabriella Café in Santa Cruz before heading to Europe. After three years in Italy, she returned to the States to work at the seasonal Italian restaurant Quince in San Francisco and then took off again, following her husband and working first at a Chez Panisse-style restaurant in Wellington, New Zealand and then in a rural inn on the west coast of Scotland, famous for its Loch Fyne oysters.

Katherine still seeks inspiration through traveling and eating out, especially in San Francisco. On her days off, she heads for restaurants like flour + water, which specializes in pasta and pizza. She also enjoys a new restaurant on Valencia Street in the Mission District called Locanda—which is part of the Delfina group of restaurants specializing in the cuisine of Rome.

But maybe the wanderlust is wearing off. Nowadays, she is happy with the subtle adventures of living and working in the Seabright neighborhood of Santa Cruz—where high-quality ingredients are plentiful and she can ride her bike to work.

Sformato of Winter Squash with
Roasted Figs and Toasted Hazelnuts

1 thought on “BACK OF THE HOUSE: FOR THE LOVE OF ITALY”