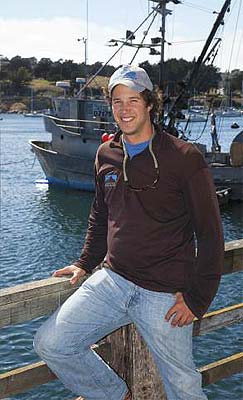 A NEW TAKE ON
THE FISHMONGER Kathy Fosmark knows fishing. There are five generations of the life in her blood, and few people are in a better position to understand the nuances of the trade in Monterey.

“Thirty years ago, most of the fish and crab my family caught were sold to the local community, often right off the boat,” says Fosmark. “Now nearly all our crab goes to China and our albacore goes to Spain. The relationship between fishermen and consumers has changed so drastically, and it’s harder and harder to make a living from the sea.”

Taxes, fuel, safety inspections, crew salaries, insurance premiums— it’s little wonder why the local fleet has diminished in recent years. “We have so many forces challenging us now—stock quotas and permit acquisitions take a huge bite out of our profits and hamper our access to the ocean—and the result is young people don’t want to get involved in the business,” adds Fosmark, who also chairs the nonprofit Alliance of Communities for Sustainable Fisheries. “What we need is more desire from the public for fresh catches from local waters. We need to reconnect people with the seafood they eat.”

With a continually evolving set of rules and regulations governing what can and cannot be caught, for the past 15 years the friction between fishermen and conservationists has become highly contentious.

“The layers of precautionary management have led to a lot of uncertainty about the future,” says Steve Scheiblauer, Harbor Master for Monterey. “Unfortunately, fishermen here are undervalued, and they don’t have a strong enough connection to their consumer base. Throw in rising gas prices and a dwindling availability of fish, and the situation becomes even more bleak.”

Now, there’s help on the horizon—a community-supported fishery, or CSF, modeled on the widely popular farm-produce subscription programs known as community-supported agriculture (CSA). Enter Alan Lovewell and Oren Frey, both of whom are Sea Grant fellows and graduates of Monterey Institute of International Studies. “Alan was the first one to notice the real lack of CSFs on the West Coast,” says Frey. “There are organizations from Maine to Florida that have been operating for decades, and yet in California there are only three—one in Half Moon Bay, currently available only to Google employees, and others in San Luis Obispo and San Francisco. So the time is ripe to get a CSF up and running on the Monterey Peninsula.”

The premise behind a CSF is simple: Customers buy a share or membership in the program, and each week they receive a box of fresh-off-the-boat seafood. And because the week’s catch is dictated by what’s in season and can be caught in a responsible, sustainable way, each week will bear surprises.

“We’ll work with a buyer/processor, who’ll act as a middleman between the CSF and the fishermen. They’ll control quality and negotiate prices, making sure everyone involved is getting the best deal available.”

It’s possible, Frey adds, that a share won’t be available to customers each week, which adds to the educational aspect of the program. “The lion’s share of seafood consumed in the U.S. travels thousands of miles to get here. But when weekly boxes contain only what’s available locally at any given time, people will understand the quality of what they’re getting, as well as the importance of responsible fishing and consumption.”

As much as this will be a boon to the local food community, it will help the fishermen who participate even more. “By guaranteeing them a higher price for their catch, they can avoid the market fluctuations that plague the industry,” says Frey. “The fishermen will have a more stable consumer base, and they’ll be able to expand their business and reach a larger market.”

And there are myriad other benefits, like bringing consumers and fishermen together in a decidedly non-antagonistic way. “We want the CSF to connect people in the community. Customers can put a face to the fishermen who provide their catch. We can make them aware of conservation issues, and hopefully end the polarization between those who make their living from the ocean and those activists trying desperately to protect the environment.”

One person on the front lines of the issue is Jim Anderson, who runs the CSF arm of the Half Moon Bay Fishermen’s Association, started with the help of Google, Inc., and currently available only to the company’s employees. “We’re still a relatively small outfit, with just a handful of boats,” says Anderson. “But the response and support from Google has been extraordinary. We’ve been up and running for only a month, and the fishing hasn’t been great, but everyone involved sees good things coming in the near future.”

Lesley Milton, who belonged to a CSF in Seattle before she moved to the Monterey Bay area, is eager for Local Catch Monterey to get up and running. “Getting my weekly shipment was always a highlight of my week,” she says. “I knew that what I was eating was incredibly fresh and was helping local fishermen. It was just one small way that I could make a big impact on the environment as well as the local economy.”

Local Catch Monterey is still in the planning and organizational stage, but the general plan is to offer shares on a seasonal basis, with customers paying fishermen up front for three months’ worth of fish. As EMB went to press, Frey and Lovewell were leaning towards offering a choice of full or half shares. The weekly cost of a full share would average about $32 for three pounds of fish and the weekly cost of a half share would be about $16 for 1 1/2 pounds of fish. The species will vary with the season.

One downside of the model is that because the shares must be purchased up front, the program won’t be able to cater to spontaneous cravings or specialized shopping lists for that special fish you want for that specific number of people you’re having on the particular date you’re having a dinner party.

But the upside of the limited flexibility of the model is that it is sure to leave plenty of business for more traditional fish purveyors in the area.

Frey and Lovewell hope to begin selling shares by early 2012. “We want to create the framework, and then let the CSF grow organically. Our major goal is to build relationships in the community— we want to show that fishermen and conservationists don’t need to work against each other, that with practical collaboration everyone can come out a winner.”

And for Fosmark’s family and other fishermen plying the waters of Monterey Bay and beyond, that’s the best news possible. “If the public really wants the types of products the CSF provides, the boats will come back and the industry will grow,” she says. “There’s real value in programs such as Local Catch Monterey—we just need to rebuild the community connections that have been lost.”

How can you help? If you’re interested in becoming a customer, signing up on Local Catch’s waiting list will help the organization gauge interest. To sign up and learn more, go to www.localcatchmonterey.com

1 thought on “OUT TO SEA: A NEW TAKE ON THE FISHMONGER”