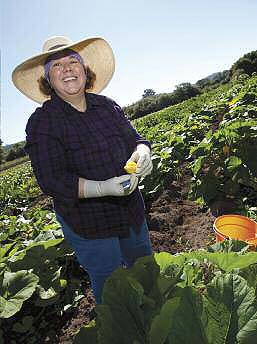 A FARM OF THEIR OWN Maria Bravo beams while standing in her field.

ALBA incubator brings pride
and produce to the community

The first time Maria Olga Bravo watched growers tending land leased from the Agriculture and Land-Based Training Association (ALBA), she was ready to sign up!

“I fell in love,” said Bravo, who grew up picking strawberries with her father. “It was the family atmosphere…small farmers had their acre or two, and they had their wife or their husband or their uncle there, and they were all picking the produce.”

Five years after that initial visit, the 52-year-old mother of four grows vegetables south of Watsonville at ALBA’s 195-acre Triple M Ranch. She earned the chance to sow there after completing a sixmonth, 150-hour curriculum and qualifying for ALBA’s small farm incubator. Bravo, who worked a desk job for 20 years before a company shutdown left her unemployed, now knows how to write business plans, prepare soil, set up irrigation systems, control pests and market her crops.

Despite its challenges, she finds her new career fulfilling. “It gives me something that is mine,” Bravo said. “I grew these things. I feel really proud.”

Interested individuals start by applying and interviewing for spots in ALBA’s farmer education program. Many participants are Latino, and about one-third are women. Nearly three-quarters of the students are current or former farm workers.

ALBA staff members and industry experts lead classes and field experiences, sharing the practical information students need to seek employment or build their own farming operations. Graduates are invited to create a business plan and compete for a spot in the ALBA incubator. Approximately eight participants are accepted annually; each leases a half-acre parcel for a fraction of the regular market rate and pays a per-use fee for shared machinery and irrigation equipment.

Thriving farmers can rent additional acres for up to seven years, topping out at around 10 acres at ALBA’s full commercial rates. At that point, program administrators help growers find their own land in the region.

The goal is to provide a low-risk environment that prepares students for long-term success, explained Peterson.

“That lease rate increases each year if people continue in the farm incubator program,” he said. “Beginning farmers get a fairly real sense of the resources and routines and commitment it takes to run a successful small farm business.”

“To be successful in this type of work, you have to be there every single day and be able to work hard,” said 21-year-old Octavio Garcia, who farms nearly four acres at ALBA’s Salinas property. He believes he would not be farming without the support of ALBA’s instructors and field managers.

“They really help us. They try to give us as much information as they can. They are patient with us.” Garcia said. “It’s really hard to become a farmer outside of ALBA because everything is really expensive, and ALBA makes it cheaper and easier for us.”

“It typically takes three to four years before someone leaves their day job to be a full-time farmer,” Peterson said. “Five years after leaving our farm incubator, 80% of those farmers are still in business elsewhere.”

ALBA statistics show that incubator participants net an average $10,000 of income during their first three years, $33,000 in years four through six and $50,000 or more once they reach commercial farming status.

“That’s a trajectory that is obviously the very basis of our program: to help create wealth in low-income communities in our region by leveraging vocational skills and entrepreneurial drive with education and access to resources,” Peterson said.

Because the graduates supplying produce to ALBA Organics must maintain the organic certification they earned while working on ALBA’s land, they help shape the region’s growing organic agriculture industry. At the same time, by providing technical assistance to community organizations, ALBA has helped triple the number of farmers’ markets in Monterey County in just six years. Its growers also establish community-supported agriculture (CSA) services and set up farm stands at local churches and schools.

The 28-year-old UC Berkeley graduate was already farming near Hollister when she enrolled in classes through ALBA. Her ultimate goal is to make both culinary and cultural connections, introducing beginning farmers to urban organizations that want to make affordable fruits and vegetables available to underserved populations.

“It’s hard to market organic products in a low-income neighborhood where people don’t have a lot of extra money. Organics have a reputation of being for [wealthy people], and that’s certainly the case if a farmers’ market is marketing to that population,” Sayuri Habib said. “But I think the crop of ALBA farmers coming out, sometimes they’ll want to have some markets that are higher paying…but a lot of them also want to feed their people and not be charging exorbitant amounts.”

A recent ALBA survey found that the organization’s farmers do, in fact, measure success by more than just income. Like Sayuri Habib, they value the ability to give back.

“It speaks to what the farmers have in mind for themselves,” Peterson said. “They want not only to build a future for their families, but also to feel like they’re investing in themselves and in the community.” For information on ALBA programs, or to support the organization, visit www.albafarmers.org or call 831.758.1469.