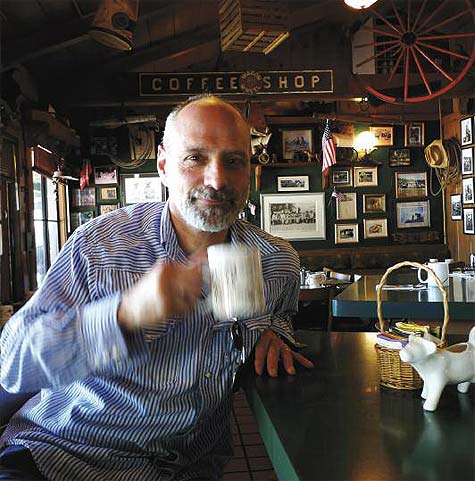 The author of Fast Food Nation and
co-producer of Food Inc. sits down with
Edible Monterey Bay at the Wagon Wheel.

This year marks the 10th anniversary of the publication of Fast Food Nation, the seminal work by award-winning investigative jouralist and local resident Eric Schlosser. The book exposed the ills of the highly centralized and industrialized U.S. food system, and in many ways set the agenda for efforts to reform it over the last decade. His next book, Reefer Madness, provided fuel for the movement to improve the plight of migrant farm workers.

In May, he helped organize with the Washington Post a major conference on the future of food. His comments and those of many other leaders of the sustainability movement can be found on the Post’s website.

This past summer, Schlosser took time out from the books he’s working on now—one on nuclear weapons and another on the prison system— to talk about food, our region and why he’s optimistic about the future.

Edible Monterey Bay: You moved to the Monterey Bay area from New York City a few years after Fast Food Nation was published. What brought you here?

Eric Schlosser: I lived in Big Sur a while ago, and my wife and I got engaged there. We’ve always considered the Central Coast one of our favorite places in the world. It’s quiet and beautiful and a great place to raise kids. I write about a lot of dark things, and this whole area offers a good counterbalance.

EMB: You started your writing career by editing your college humor magazine, but as you say, your journalism gets into pretty grim areas; in fact, you’ve explored and exposed all manner of exploitation of the weak by the powerful. What do you do to find respite from these heavy topics?

ES: You know, most people assume that I must be a pretty bleak guy, with my office walls painted black, listening to thrash metal bands like Slayer and Megadeth all day. But I try hard to enjoy the day. Fundamentally, I’m optimistic. I’m driven by the belief that things don’t have to be the way they are. And that may be what helps me to explore these dark subjects for long periods of time. There’s a lot of laughter in our household, usually at my expense. And when life starts feeling grim around here, you can just walk outdoors, look around and put things in the right perspective.

EMB: You never planned to write about fast food—Rolling Stone asked you to. And yet, writing about it seems to have changed your life: You’re an extremely private person, but you became an ardent food activist. Are you glad your path took you down this road?

ES: I feel lucky beyond words to have written a book about issues that I care about—and to find that other people care about them, too.

EMB: What reforms have you been most gratified to see come to pass?

ES: The most gratifying thing hasn’t been any specific legislation or reform. It’s been the sea change in attitudes that’s occurred since the late 1990s, when I first began to investigate our food system. So many of the issues that once seemed to be on the fringes of society— like food safety, childhood obesity, animal rights, the need for healthy, organic food—have entered the mainstream. I wrote Fast Food Nation because I thought these things weren’t being discussed and debated in the media. And now they are, on a daily basis. I’m not taking credit for the change. I just feel incredibly relieved that it’s happened. And there’s no turning back. When most people see how this industrial food system really works, they don’t want to be part of it any more.

EMB: What about the Food Safety Modernization Act?

ES: Like everything that Congress does, it was a compromise. But it was also a good first step toward improving food safety without harming small producers.

EMB: What continuing problems with our food system are you most concerned about?

EMB: A lot of fast-food chains have added salads and other “healthy” items to their menus. But in its August edition, Consumer Reports magazine disclosed that only 13% of respondents to its first survey of fast food customers said they’d chosen something “healthy” on their last visit to a fast food outlet. What do you make of that?

ES: I’m delighted when any of these chains puts something healthy on their menu. McDonald’s just announced that they’re going to add fruit to their happy meals. That’s great. But it would’ve been a lot greater if they’d done it 10 years ago. I question the sincerity of these moves. It’s all about PR and marketing. But if that’s what gets someone to do the right thing, well, it’s better than nothing.

EMB: Despite America’s lingering bad food habits, you say critics have it all backwards when they say that being a foodie—and more to the point, being a conscious eater and supporting sustainable food production—is elitist.

ES: Wealthy people will always eat well. We don’t need to worry so much about them. They’re doing fine right now. The people who need organic food the most are the people who pick our fruits and vegetables by hand. And the people who live in agricultural communities. And most of all, their children. Tens of thousands of farm workers are sickened every year by pesticide exposure. These are incredibly toxic poisons. We need to get these pesticides out of rural America, out of the water, the households, the air. And we need to get them out of our food. As for the urban poor, they are being sold some of the most heavily processed, unhealthy food on earth. And they can least afford the obesity, diabetes, heart disease, cancer and high blood pressure that soon follow. Our current food system is profoundly elitist. I think a living wage, and a safe workplace, and access to good, healthy food are basic human rights. And right now millions of Americans are being denied them.

EMB: In this issue, we quote a local school food services director saying that some farm worker parents avoid feeding their kids vegetables because they’re so familiar with pesticides and don’t want their children to be exposed to them.

EMB: What do you think are the best hopes now for getting farm workers into fields where they don’t have to worry about pesticides—and getting more organic food on their tables, and those of other lowincome Americans?

EMB: Are you hopeful that the 2012 farm bill will help?

ES: We’ll see. Despite all my optimism, it’s hard to be hopeful about anything in Washington, D.C., especially this Congress. But I do think there will be a strong push to make the bill take into account the interest of consumers, not just agribusiness companies.

EMB: Are you encouraged by shifts in public sentiment and agricultural practices in our own region?

ES: I am encouraged. There are a lot of farmers here, big and small, who are trying to do things more sustainably. And if you want to be a locavore, it’s hard to imagine a better place in this country to eat local.

EMB: Your book Chew on This aimed to deliver the message of Fast Food Nation to teenagers, and it became a New York Times bestseller. Aside from giving our kids books like yours to read, what else can we do to raise our children to be responsible eaters?

ES: I’m a big believer in trying to make people think, instead of telling them what to do. And that applies, most of the time, to kids, too. I think once they understand how the current system works, they’re eager to eat differently. For me, it’s all about being aware. And action follows from that.

EMB: What do you think are the most important things we can each do as individuals to reform our food system?

ES: Support your local farmer. Try not to give money to food companies that are causing great harm. And get engaged, one way or another, with groups that are trying to make change on a local, state or national level. There are about a dozen or so companies causing all these problems—and more than 300 million Americans. We ought to be able to change how that dozen behave.

EMB: Do you think that “sustainable” will ever become “conventional” in the agricultural world?

ES: It won’t happen overnight. But as the real costs of the current system become clear—and as the companies responsible for the problems are made to pay for them—the pace of change will accelerate. This industrial, “conventional” way of farming is clearly unsustainable. So we’re going to have to embrace a new way, and the sooner the better.

EMB: When it comes to fast food, you’ve said that after writing Fast Food Nation, you stopped eating at most chains other than In-N-Out Burger. Do you miss any of the rest?

ES: My diet is far from pure. But I have zero desire to eat that processed, industrial stuff. When I want to eat a burger, fries, pancakes or a chocolate chip cookie, I want the real thing, not some phony imitation of it. The best thing about McDonald’s is the toilets, which are generally clean.