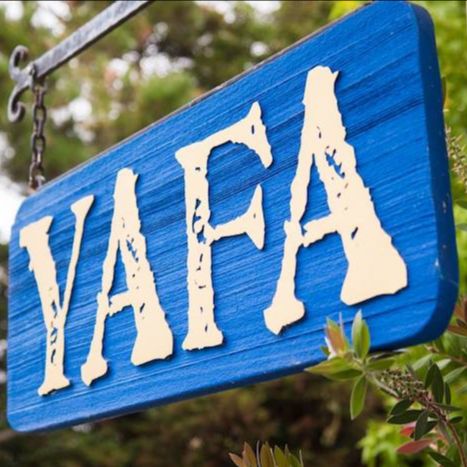 May 28, 2019 – Yafa Mediterranean restaurant in Carmel today became the first and only restaurant in the Monterey Bay area to ever win the prestigious Michelin Bib Gourmand designation. The award means Yafa is an especially good value, offering two excellent courses plus wine or dessert for $40 or under.

Michelin has never covered restaurants in our area before and its new California Guide due out next week includes the Monterey area. But a single Bib Gourmand listing is disappointing and makes us wonder how much time the Michelin inspectors actually spent here. While Yafa is a deserving honoree, surely there are others that fit that category as well.

Located on the corner of Junipero and 5th in Carmel, Yafa was opened in 2013 by Ben Khader—a native of Jordan. Its menu combines Middle Eastern specialities like hummus, kebabs and pita bread with pastas and more substantial entrées such as petrale sole, filet mignon and rack of lamb.

Michelin will announce starred restaurants at a special ceremony in Huntington Beach on Monday, June 3. Chefs receiving the coveted honor for the first time will be on stage to be presented with a Michelin chef’s jacket by Gwendal Poullennec, international director of Michelin guides. The ceremony will be broadcast live beginning at 5:30pm over the Michelin Guide facebook page.

Speculation is rife over which local restaurants will receive a Michelin star. So if your favorite chef hops on a flight to Southern California next Monday, you might just have your answer.