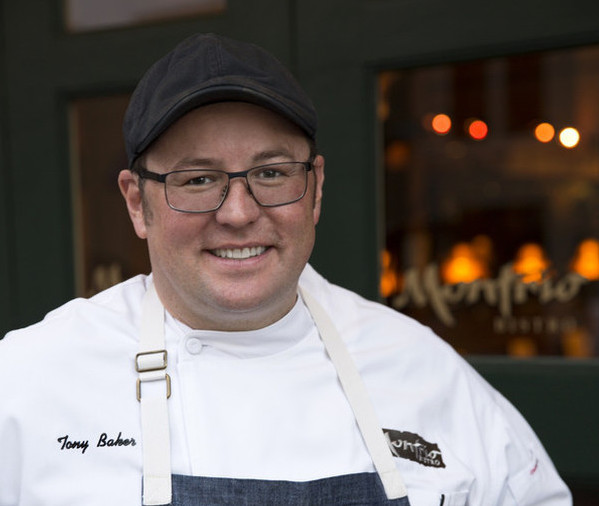 The thing with Baker, though, was that while a restaurant like Montrio Bistro can be consuming, he always had something else cooking.

At one point he ran a direct-to-dealer motorcycle component store; around that time he also fabricated LED turn signals for BMW. For a while he toured the country leading cooking demos on local produce like artichokes and hybrid cruciferous vegetables—while conducting research on chef preferences for new varieties. As part of a scrappy crew that includes Montrio owner Tony Tollner, he races all sorts of vehicles at tracks from Laguna Seca to Sonoma. To fill out his spare time, he raised two now-college-age daughters with his wife, while supporting impressive equestrian careers for all three of them.

So when the longtime executive chef and partner at Montrio recently announced he was stepping down from day-to-day duties, Edible Monterey Bay was most intrigued to learn what he has cooking now.

It involves a lot of bacon. He and the team behind his burgeoning Baker’s Bacon dynasty are working on a new version of back bacon, introducing a sous vide bacon to as many chefs as possible and expanding distribution of Baker’s Bacon in the local area and beyond—with 50 active accounts in place and 15 states currently carrying it and more coming on line this year. A free bacon demonstration-sampling happens at Grove Market in Pacific Grove 11am-2pm this Saturday, Feb. 15.

Longtime area chef Lisa Magadini—who has captained the kitchen at Pebble’s Club XIX and started Mecca Deli in Marina—helps him canvas the area from their Marina HQ. She contends the dry-cured, true-smoke, heritage-only pork sells itself.

“I’m a chef and never thought I’d be representing food products,” she says. “It’s incredibly easy because he starts with quality from the beginning.”

When asked what makes Baker a unique chef, she hits on that restless itch to learn more—citing the time he rewired their convection oven just the other day.

“He never ceases to amaze me,” she says.

Edible reached Britain-born Baker in Bristol, two hours southwest of London, as he was helping his family assemble a celebration of life for his dad. The somber occasion provided more perspective on what go-getters like him want to get out of living—and the next stage of a career—and where Baker’s brand of hustle originally hails from.

Edible: Not everybody might be aware how entrepreneurial you’ve been, whether that’s work with The Ove Glove or limiting water use in the kitchen with special attachments for dishwashing hoses. Where do you get that instinct?

Baker: Today I spent a lot of time writing a eulogy. One of the things I wrote was my dad did everything. He changed his own brakes. He’d knock down the walls and put a beam in, plaster it, paint it and remodel the house. He did things whether he knew how to do it or not. If he didn’t know something, he’d learn it and do it. He wasn’t afraid to try new things. I miss him a lot…

I stayed at Montrio for a long time for various reasons, including my role as partner, [but] I was never complacent doing the same thing over and over again. I have to be challenged all the time. If you aren’t, you lose a little edge.

I’ve never been shy about an opportunity. Take The Ove Glove—it was fun, it got my name out there, it made a little bit of money.

What do you miss most about being an exec chef?

The energy and excitement, and the people. I love my staff, many of whom have been with me for 10 or more years.

As this chapter closes, who would you like to acknowledge, first and foremost, as part of your success?

What are some of the crazier changes you’ve observed in the restaurant industry over the time you’ve spent in it?

The popularity of “budget” cuts surpassing the cost of prime cuts. For example, short ribs, veal cheeks and skirt steak all cost more per pound than prime New York!

How would you characterize Downtown Dining’s role and influence in the Monterey Bay area?

I think Tony Tollner needs to take a lot of credit for his maniacal approach to the restaurant business. It’s a tough business and you won’t succeed without that passion and dedication to the business. “TT” promoted growth in any employee willing to stick his or her neck out, and by ensuring that we stayed with—or ahead of—trends, if not outright creating them. Whether that be in the cocktail bar—case in point, [celebrated Montrio drinksmith] Anthony Vitacca—with wine or in the kitchen.

Promote from within—all the current chefs in DD have worked up to their spot. Food cost comes down to training, regular meetings, being held accountable and being incentivized when targets are met.

What are some of the ways you are excited about the way food has shifted? Some ways you’re spooked?

I graduated culinary school in 1989. I learned and worked in French cuisine, albeit modern French. So I spent a lot of time dining out, I worked every Masters of Food & Wine event [at Highlands Inn], read cook books, trade magazines etc. to see and learn what leading chefs are doing, being careful not to plagiarize but taking an idea and making it my own. Often I would get an idea for a sauce or other component of a dish and that would be the catalyst to build from.

I’m spooked about getting carried away with molecular, and sous vide. I see some folks doing some sketchy stuff with sous vide, not to get into details.

What are you proudest of accomplishing while at Montrio?

Profitability. Many don’t know that Montrio came close to shuttering its doors in 1998; instead we made some changes in all areas of the business and turned the ship around. That was huge.

[Cooking] competitions were fun, and always enjoyed some healthy banter. It was nice to be a winner at Gilroy Garlic Festival, Big Sur Foragers Fest, and various PMA competitions.

Same for being honored as the Celebrated Chef and Chef of the Year of the local chapter of the American Culinary Foundation and as United Fresh’s Fine Dining Chef of the Year.

But most of all, I’m proudest of building a family with the staff and a culture of inclusivity—and working with that family to win [locals polls] as Best Restaurant in Monterey year after year.

SPEED ROUND! What are two or three of your top chef hacks?

VitaMix and hot butter Hollandaise—that’s one of few that I come up with. One reason Montrio has done well is that I am not a hack!

Who’s on your Mount Rushmore of food?

Thomas Keller. It may sound cheesy but I have so much respect for Chef Keller. I had the pleasure of cooking with him at several events. The first time, in 2000 at Highlands Inn [Masters of Food & Wine], I worked on the chef’s entrée with a chef friend of mine from England who happened to be visiting. We worked on it together that Saturday night, and the following day we found ourselves at lunch at the Laundry as TK’s guests. He is a class act.

Favorite thing to prep at home?

I still love a great steak and salad.

Most humbling moment of your career?

Working at Obsession [a U.K. food festival]. The quality and the level of skill from some of the chefs was jaw dropping and humbling.

Favorite thing about the restaurant industry?

It’s hard, yet rewarding. You have to be a bit crazy to enjoy it.