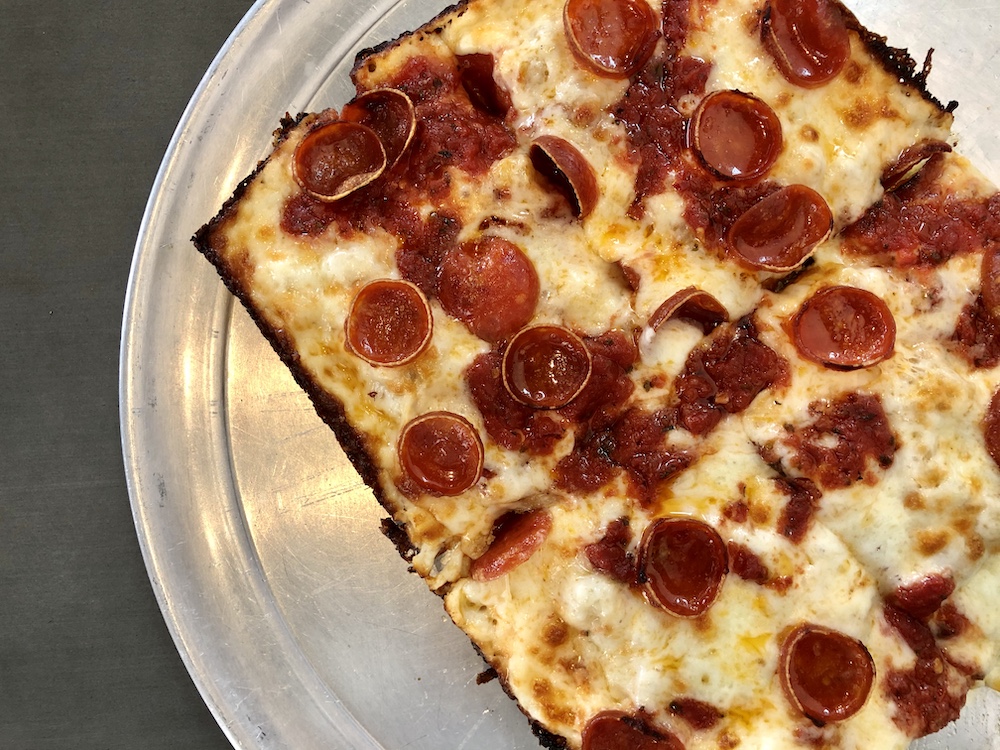 January 21, 2020 – Growing up in the nineties, was there any food more appealing than pizza? As kids, we envied the epic pizza parties of crime-fighting turtles and spent our weekends at the mall inevitably scarfing down a slice of Sbarro while we were there.

It’s not just nineties kids who have swooned over the perfect slice—the pizza parlor has long been an icon of American pop culture.

This nostalgia sets the stage for Slice Project, which opened in the old Fox Theater in downtown Watsonville last month. Formerly home to Fox Pizza and Grill, the corner spot has already become a popular fixture and part of a revival downtown.

Slice Project comes from brothers Brando and Kristian Sencion, both born and raised in Watsonville. “We spent all our childhood and adult lives here and we couldn’t imagine opening anywhere else,” says Brando. Together, they sought to create a casual, community-oriented space for locals to eat and hang out.

“Slice Project is a combination of both of our passions. We always had conversations about doing something together—two years ago we got serious about it and decided to open up a pizzeria and taproom,” Brando explains.

Brando, 26, oversees operations, leveraging his experience as a program director for the nonprofit Santa Cruz Community Ventures. Kristian, 31, leads the kitchen. His resume includes popular Monterey County spots like Dio Deka, Lafayette Bakery and Jeninni kitchen + wine bar. Most recently, he ventured out on his own with Niño Gordough, a popular bakery stand at the Marina and Old Monterey farmers markets.

He brings a chef’s touch to the iconic New York slice with a carefully crafted dough recipe that bubbles up when baked for a thin, foldable crust with a slight crisp on the bottom and puffed edges.

But the White Bugatti—with white sauce, mozzarella and lemon zest—has emerged as the signature slice. “I think most people have a negative idea of what a white sauce pizza is, but ours challenges that notion and makes people think about white sauce differently,” says Brando. “The funny thing is it’s such a simple pizza, but it packs a punch to your taste buds.” The pie is a nod to Jeffrey Weiss—opening chef for Jeninni kitchen + wine bar—a mentor who Kristian credits with helping hone his cooking style, “simple, yet bursting with flavor.”

Notably, Slice Project is the first in town to feature Detroit-style pizza—a cult favorite in San Francisco these days.

Brando recalls trying a Detroit pie on a trip to the city, “I was hooked by the crispy cheese edges and the pizza sauce. I texted my brother and said, ‘We need to have this at Slice Project.’”

That inspired Kristian to spend hours in the kitchen researching and tinkering with a recipe for the perfect pie with crisp, cheesy edges and a light, fluffy interior. “It took us a few months to develop and we’re happy with it,” says Brando. “But knowing my brother, he is always looking to improve it and make it better,” he adds.

Detroit-style pizzas are limited—they’re only served on Friday, Saturday and Sunday, and typically around 15 are available each day. There’s the classic Red Top (house tomato sauce, mozzarella and brick cheese blend, oregano and breadcrumbs) or the 313 that’s named for the pizza’s eponymous area code and substitutes cupping pepperoni for breadcrumbs.

Slice Project expects to add beer in the coming weeks, once paperwork for the liquor license is approved by the city. “We’re super excited because we’ll have awesome local and regional craft breweries on tap,” teases Brando. (In the meantime, quench your thirst with fountain sodas or bottled Mexican Coca-Cola.)

The brothers are excited to raise the profile of Watsonville’s downtown scene for locals and lure passersby from the Monterey Peninsula and Santa Cruz. Slice Project adds to the growing list of new food businesses debuting in Watsonville, which have inspired some to crown Watsonville the “Brooklyn of Monterey Bay.”

“In the last few years, things have been changing with new businesses coming into town. We wanted to make a difference in downtown Watsonville, especially in the food scene,” explains Brando. Kristian notes the quality of product here on the Central Coast, “I’ve been in this industry since I was a teenager. One thing I noticed working in the Bay Area, the majority of the ingredients came from Watsonville. Why would I want to be anywhere else?”

Both are appreciative of the community support Slice Project has enjoyed in its first month open. Brando is grateful to play a part in reviving the downtown scene, “We’re very conscious of the changing dynamics in our city and the plan to make downtown Watsonville more of a destination. We wanted a slice of that before others from outside of our community took over.”

He looks forward to other businesses joining Slice Project downtown to help show off his hometown, “Downtown Watsonville is already a great place, we just hope to make it better and build a food scene that other cities around us have.”