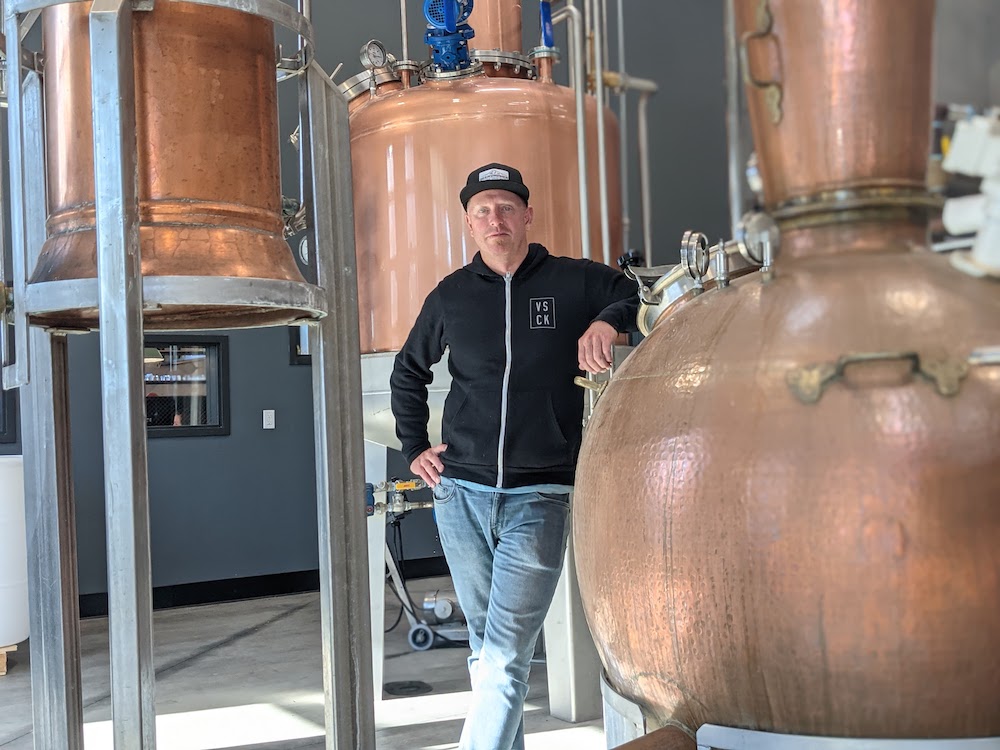 July 6, 2021 – It’s been a trailblazing few weeks for Venus Spirits. But, in all fairness, for these Santa Cruz County distilling pioneers, that’s how they roll. (I mean, find me another operation making aquavit around here.)

Last weekend represented a new beginning and the end of a long wait. It was the first time the much-anticipated bar at Venus Spirits Cocktails & Kitchen was able to open full tilt.

On Friday the mood crackled like a fire, as General Manager Tulsi Schneider observed from a high-top table in the bar area.

“It’s a fun night to be in here—the counter changes the vibe in a good way,” she says. “We’re getting closer and closer to the service level that was originally anticipated.”

She believes a space designed to be vibrant is more in-demand than ever given the past 16 months.

“We intended this to be a very social place, and it’s really exciting to achieve that—it already has a feel that we haven’t had before,” she says. “Coming out of a time where it was the opposite of being social, now it’s even more valuable.”

The kitchen-bar is one part of Venus’ multi-functional ecosystem, which allows for a three-part journey. Moving west to east on High Road, visitors can lift off with a tasting flight and small plates at the Tasting Room; take a tour of the gleaming—and customized—distillery; and sit indoors or out with curated drinks and smart plates from Executive Chef James Manss, who came on mid-pandemic. (For the moment, tour rules post-closure are still being ironed out.)

“The intended scope, as Sean likes to say, is distillery first, and everything else we have here is to help accentuate that,” Schneider says. “You see how the spirits are made, you do a flight tasting of the spirits by themselves, then you come over here and have cocktails that are thoughtfully crafted.”

Manss arrives well familiar with local farmers and fishermen after working a range of local spots like Suda, Sotola Bar and Grill, and Chaminade. While he gave the menu a spring refresh a little while back, a bigger wave of new menu items is planned for next week: Forthcoming items include mussels with fennel, leeks and chili pepper threads; smoked salmon with purple radishes, wasabi cream and black mustard seeds; and mole baby back ribs with habanero-apricot jam and mole barbecue sauce.

He’s enjoying experimenting with spirits—whether that’s as part of Sunday Pie Parties or pickling in novel ways—but perhaps most enthusiastic about welcoming the community back.

The botanicals of the flagship gin, meanwhile, work wonders in the Gin No. 1 with house tonic, lavender, grapefruit and juniper berries. They also led Manss to incorporate many of them in the 48-hour prep process of his popular fried chicken.

Across the menu, Manss reveals a gift for details like the bourbon bacon jam he crafts with Venus’ whiskey or the vegan jalapeño cashew cream that elevates the Brussels sprouts.

“We’re proud of the quality we’re able to offer and the comprehensive experience,” Schneider says. “But whether you want the whole education or not, the cocktail program and the food are top-notch.”

With the West’s menacing fire season starting, staging any sort of outdoor fire would be sketchy anywhere in the Golden State. So Venus and company took pains to make sure the blaze was completely covered with volcanic rock—and sparked at depth through a tube—so no flames could escape. It took four hours to build.

Then they set about slow-roasting agave piñas, which are grown near Davis by longtime agave farmer and advocate Craig Reynolds, to create something without much precedent: a California mezcal-style spirit. (Though by law, like Champagne, it can’t legally be called mezcal or tequila unless it’s made in a specific part of Mexico.) The piñas in the big pit—60 100-pounders all told—then cooked for a full week before being shredded and shipped to Santa Cruz for processing.

They used almond wood to fuel the fire, which is noteworthy in a big-picture way. Almonds are one of the state’s most lucrative crops, but a major water consumer that soaks up more than a gallon per nut—and a whopping 10 percent of the state’s water total. Mature agave plants, meanwhile, are super drought tolerant. So as palatable as it is to have agave being locally sown, it’s also promising to ponder where reimagining what we’re growing might lead us.

Venus has an established El Ladrón Blanco Blue Agave Spirit that Sean Venus distills with juice imported from Jalisco and bottles in house. (They also have a reposado and añejo Ladrón they age two months and a year plus, respectively.) He calls the new California-sourced agave project—which could lead to new Venus agave spirit available as soon as August—“an experiment on everyone’s side.”

“Is it viable? Are consumers excited? Are they willing to pay a premium?” Venus asks. “Is it going to be a long-term sustainable project?”

If the spirit finds traction, he plans to seek out additional agave farmers.

“More growers are getting into it,” he says. “Supply will be key in determining whether this is a hobby or a [major] project.”

While things like a vegetarian Reuben or a California mezcal aren’t the most intuitive things to expect dining out, Venus’ healthy obsession with staff and guest education makes it work.

Manager Megan Hunter explains. “We take training very seriously,” she says. “It’s a huge priority from top to bottom. We want each member of our team to be brand ambassadors.”

One thing that helps that ambassador work: Community enthusiasm in and around Venus Spirits, its gleaming kitchen and its galaxy of projects. It’s the kind of excitement that speaks for itself.