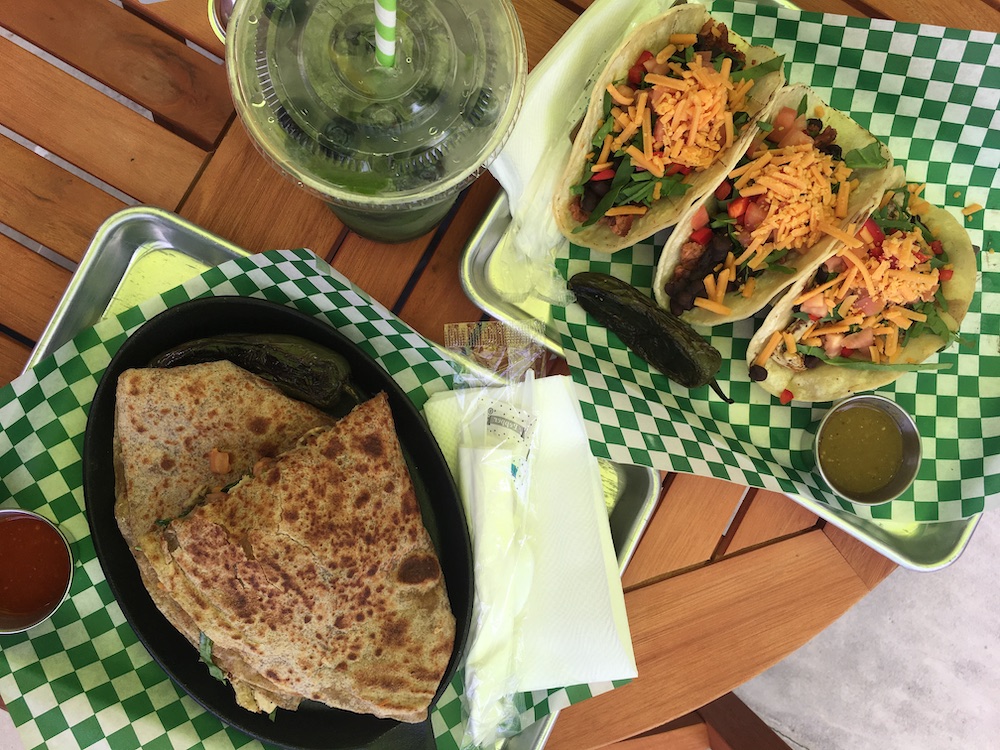 But still—Mexican food without all the crema and queso, the pollo a la plancha and tacos al pastor?

Isn’t something lost in translation?

Increasingly the answer is: no.

Now historic Cannery Row has a new entry in the category. Taco Shack Vegan Kitchen sits in a place that’s strategically located and poetically ironic: It occupies the former burger joint Johnny Rocket’s at 685 Cannery Row, across from Steinbeck Plaza.

Johnny’s bones remain intact, including the counter bar and integrated stools, comfy booths, open kitchen and front patio, but the revised grey and greens are a far cry from the red and white stripes. Photo murals of everything from a vintage scuba diver to old Cannery Row provide cool context and visual pop.

Also in the on-deck circle: Taco Tuesdays, burritos, chilaquiles (along with other breakfast offerings) and a take on Mexican hot chocolate.

The Kitchen draws a profound depth of experience from a team led by two Mexican-American women. Owner Blanca Cuevas has 10 Lamberto’s Mexican Food restaurants across the greater Los Angeles/Inland Empire area. Kitchen manager Maria Ramirez has worked in Monterey County area food for 35 years, and ran her own Cabo Blue Taco Shack (on Alvarado Street) and La Chiquita Catering, among other projects.

Ramirez’s son, a longtime friend of Cuevas, felt like his mom might be a good consultant for Lamberto’s. The chef’s sazón won over Cuevas and the seeds of a partnership were planted.

Sazón, by the way, might be a more important bit of Spanish vocab for the purposes of this story than vegano. It’s a way of saying seasoning, but it means something more—like verve instead of vigor, or swol instead of strong.

It’s something both Cuevas and restaurant manager Rosa Fields highlight front and center. (Fields herself is a veteran of the local food scene with stints that included banquet management at former Oldtown Salinas standout Hullabaloo.)

“People say, ‘What are you putting in that chicken? It can’t be vegan,’” Fields says. “Well, it’s sazón.”

Today I gave things a trial run. They clearly know what they’re doing.

The space is spotless. The portions are substantial. The ingredients are good. The house salsas are fresh and zingy. The prices are Cannery Row reasonable. (One massive signature taco or three big tacos are $13.)

I tried a loaded 12-inch quesadilla called “The Row” with, yes, vegan chicken. The cheese proved surprisingly melty and chicken revealed why it’s become the leader of the band: Its sazón is the bomb. The team guarded against my recipe inquiries, but did allow that Himalayan salts, both white and pink, might be involved.

The vegan steak tacos aren’t as good as the chicken, but that’s not a fair fight. They come piled with chopped spinach and tomato, ungreasy beans and shine just fine with the blend of house green and red salsas—which is greater than the sum of its parts, and both the red and green are good on their own.

Cuevas came to vegan cooking after converting half of one of her Lamberto’s menus to satisfy her Yucaipa, California, neighbors with more of the healthy fare they craved, then added another vegan-driven Lamberto’s near Community Hospital San Bernardino for similar reasons.

Ramirez came to it as her family started eating healthier and she started applying her recipes to less meaty items and liked the results.

Paul Ligorski came because he was the colleague I invited, and works for Blue Zones Project Monterey County. As I reported in January, BZP looks to cultivate ways our area is and can make the healthy choice the easy one. One of its wide-ranging initiatives is to encourage better-for-you restaurant menu items, so he’s loving The Shack. (Full disclosures: I volunteer with BZPMC’s Food Policy Council; The Shack offers “non-vegan” chicken and steak to keep the Cannery Row business coming.)

Gilberto Duran came because he’s a plant-based eater who spotted The Shack on social media, where it’s had a meteoric rise in followers. I saw him seated on the patio as I was leaving and asked if he was enjoying what looked like lettuce bites.

“It’s incredible, so good,” he said. “I saw it on Instagram yesterday and got so excited I drove up from Soledad today.”

What makes me excited: New Monterey Mexican, which has had El Cantaro Vegan Mexican Restaurant in place since 2013, is driving the wider Peninsula in that direction. No matter the translation.