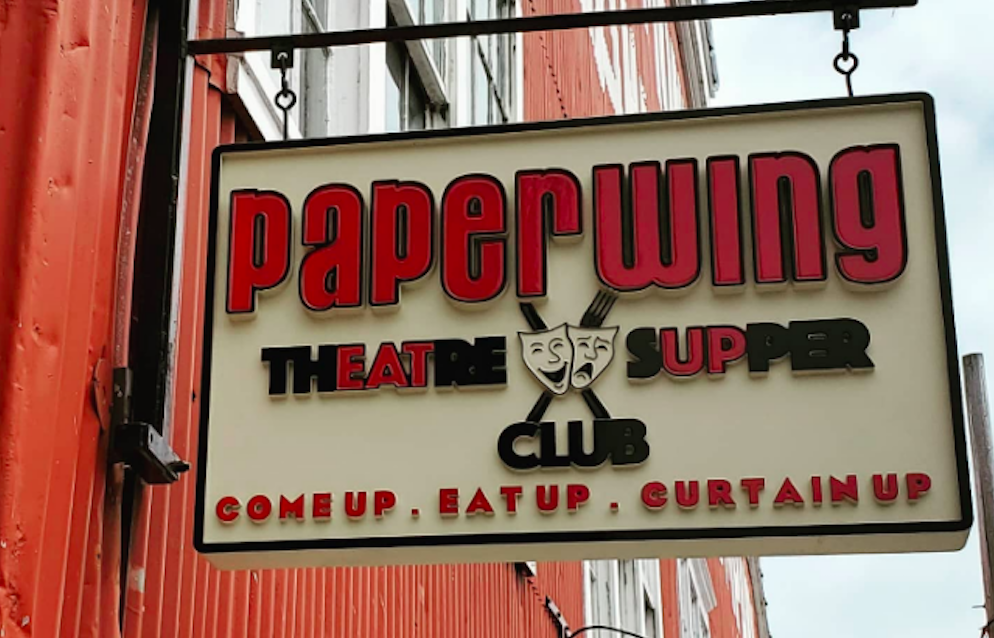 August 25, 2020 – Adapting to numerous crises in the span of a few short months has, unfortunately, become second nature for many on the Central Coast. One group that has managed to do numerous quick pivots is Monterey’s Paper Wing Theatre, newly reinvented as Paper Wing Theatre & Supper Club on Cannery Row.

Not only did Paper Wing have to change location and add food to its mission in 2020, it is also actively supporting people during tough times—first COVID-19 and now those affected by the wildfires surrounding Monterey Bay.

“This is such a gift, that we’re in a position to help,” says Paper Wing founder Koly McBride, who has distributed hundreds of free meals to disadvantaged people in the past few months, and is now providing food to local fire evacuees.

This past Saturday and Sunday, she and volunteers served up free meals to anyone displaced by the fires, offering hamburgers, fish and chips, fried chicken and more to people sorely in need of a good meal and a little comfort.

Paper Wing’s journey from community theater group to dinner theater club started late last year, when its venue in New Monterey went up for sale, and McBride and partner LJ Brewer decided to look around at other possibilities.

They found an intriguing space upstairs at the historic Monterey Canning Company building, formerly home to the Giant Artichoke restaurant. “I’m a lover of all things historic and vintage, and I loved the layout and the exposed beams,” says McBride, referring to the location as “iconic.”

She and Brewer, a former chef and restaurant manager, were also attracted by the fact that it had a working kitchen and began talking about creating a dinner theater venue. It was something they’d wanted to do before, but didn’t have the facilities to deal with it. Bringing this to their new location seemed like the right thing to do, so the name of their enterprise changed to reflect that.

It seemed that everything was falling into place—the city of Monterey gave its blessing and business leaders were enthusiastic—and then COVID hit. McBride and the rest of the troupe moved everything into the Cannery Row space and then tried to figure out what to do next.

When takeout dining became the go-to for numerous local restaurants, McBride and Brewer jumped in.

They began offering what McBride calls “coastal comfort food,” items such as clam chowder, hamburgers, and fish and chips, in addition to extras like deep fried artichoke hearts and herb-infused lemonade. They also offer a rotating variety of box dinners, although the fried chicken dinner has just been added to the menu as a constant offering.

Locals and tourists loved the hearty selections and being able to pre-order on the Paper Wing website and then pick up. Hours are limited at present to Saturdays and Sundays from 11am-3:45pm.

A new mission began when a faraway friend’s wish to support Paper Wing led to the idea of accepting donations toward box dinners that would go to feed local people in need.

To achieve this new mission, McBride partnered with Tanya Kosta of ALL IN Monterey, a community organization that has been providing food and necessities to homeless and disadvantaged residents during the COVID crisis. Before long, donations made through the website and through PayPal were enabling Paper Wing to give away 10 to 20 meals each weekend.

When outdoor dining was allowed, Paper Wing got permission to use an outdoor ground level walkway for dining, so patrons now can eat at five socially-distanced tables or have the option of getting food to go.

McBride said she was even able to add a tiny stage to the outdoor space and has been able to present small shows, starting with live music. More recently, Paper Wing started performing a 25-minute adapted version of “The Aristocats.” The cast featured children and adults, and cleverly used animal masks and unique staging as a way to do the show while also being masked and socially distant from both each other and the patrons.

Now, with wildfires raging all around, Paper Wing is once more stepping up to help the community. The supper club gave away free meals on Saturday and Sunday to fire evacuees, and issued a call for more donations to create additional box dinners to meet the need. McBride’s volunteer crew also has been preparing trays of breakfast burritos for fire evacuation centers.

The dinners “give people a little bit of normalcy” in a crazy and challenging time.“It may be the only meal where they get to sit down and eat with their family,” she adds.

McBride says she’s been buoyed by the fact that people are coming together to help their community in a time of crisis.

“It’s wonderful, how everyone is rising up together … We have been made stronger by the challenges. As long as there are people to feed, we’ll be doing this.”

To give to Paper Wing’s mission, donate through the website (paperwing.com) or via PayPal, thepaperwingco@yahoo.com, with the hashtag #feedhungrypeople.