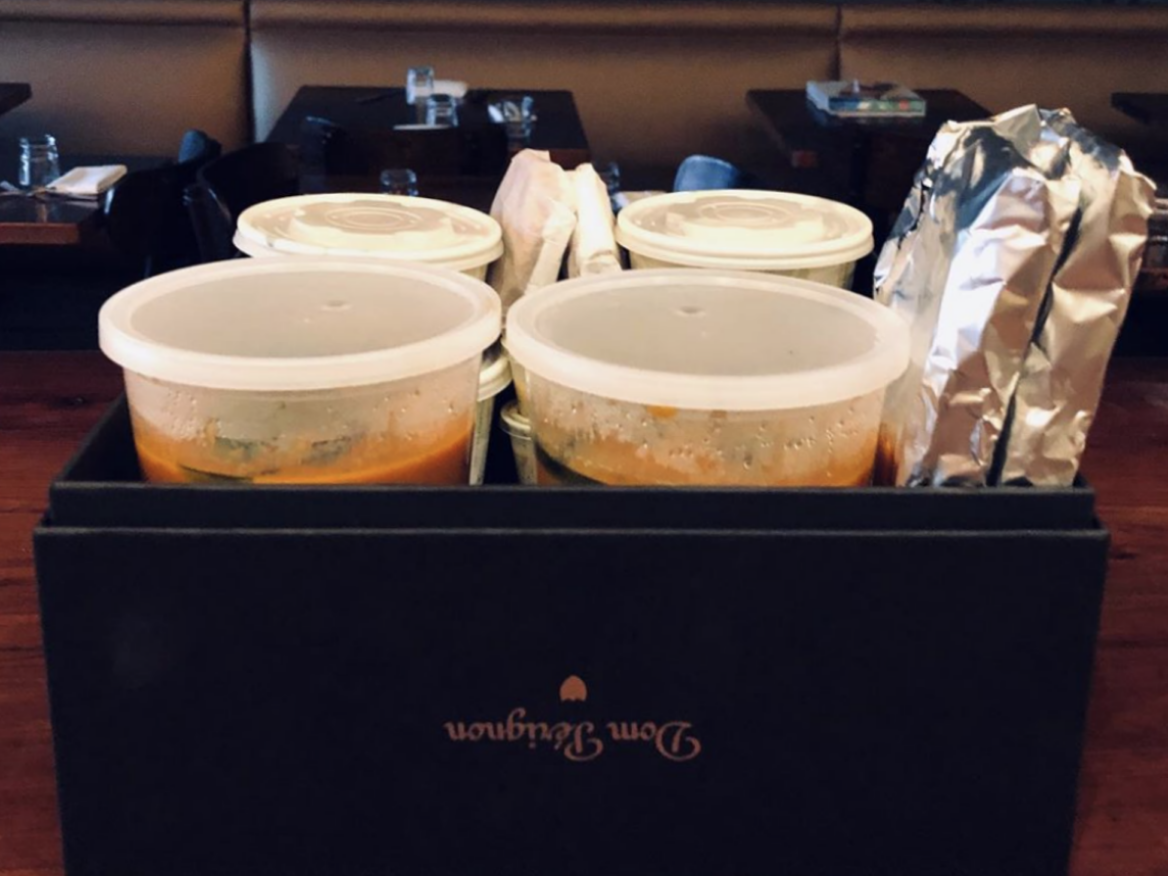 For a restaurant that had historically done absolutely zero takeout, ever, as recently as two weeks ago, Poppy Hall has assembled a pretty slick system.

It wasn’t always so pretty.

Michaela Kuenster is a Poppy Hall hostess and server now turned self-described “takeout wrangler” and part of a skeleton crew that stars Poppy’s two chefs, Philip Wojtowicz and Brendan Esons, and some part-time prep help. She can rattle off a list of early struggles: floppy and flimsy to-go box fails; chaos from way too many order avenues (website! phone! text! emails!); sold-out supply while placed orders were still queuing up, leaving people empty-handed.

“The first couple days were a little rough,” she says. “Things slipped through the cracks. It was a Tetris scramble to figure out how to do it efficiently.”

Jump ahead a few days and they’re humming along—and frequently selling out without sending anyone home hungry. They quickly learned one featured meal worked better than a la carte ordering. They assembled stanchions on the sidewalk and a pick-up table in the door featuring a surplus of sanitizer and cups for clean and dirty pens to sign off receipts. They got comfortable with a lot of rubber glove changing. They’ve even begun planning delivery service.

“Just seeing all the locals and regulars supporting us has been really cool,” Kuenster says. “Some people come almost every day, get something small, tip generously and write us a little note of encouragement. They want us to stick around, which is inspiring. They’re the reason we’re here.”

Down Lighthouse Avenue, similar elements of adaptation, innovation and skeleton staffing are also in play.

Crema owner-operator Tamie Aceves feels crushed she had to lay off a vast majority of staff—going from 30 to five—but is just as vigilant in keeping her so-called “Cremlins” linked to their following and vice versa. To that end her team regularly posts mini-profiles on what staffers are doing with their down time via social media, and hosts photo contests for their fans to win $25 gift certificates. Jorden Richardson recently scored after posting a photo on Instagram of her drinking a Crema to-go Ramos fizz in the bathtub.

“We’re trying to keep the whole Crema feeling going even though we’re not seeing each other in person, for our followers and our staff,” Aceves says.

Then she pauses to wish out loud.

“If we could just take the cash flow piece out of the equation…” she says. “But we’re trying to harness the opportunity [to figure out] ‘What can we do to come back better?’”

While her restaurant business has shriveled and her wedding catering company, La Crème, is on hold for the moment, Aceves adds that she’s grateful for the perspective the crisis provides.

“It’s not like we’re the only people it’s happening to,” she says. “There’s all this support out there. It’s difficult, but in my world people are coming together and our state and local government are doing a good job.”

The crisis also reminds her how unique of a challenge her chosen craft is.

“Restaurants are such a difficult industry with little return,” she says. “You have to love it.”

Crema has done what it can for furloughed employees by issuing instructions on unemployment, coaching them on how to secure stimulus checks, writing letters to landlords and, most deliciously, doing what it does best: cook. The last two Sundays have been care package pickup days and remaining staff bundled fried chicken, seafood pasta, garlic bread, bolognese with penne pasta, apple crisp and produce in boxes scaled to the size of each crew member’s family.

Meanwhile the restaurant is doing nearly its full menu for pickup (Benedicts don’t travel so well, so they’re out), offering a 10 percent discount on gift certificates and dishing daily curbside espresso service (which includes things like breakfast burritos and brunch cocktails on top of coffee).

“The espresso bar doesn’t make a ton of money but it takes care of our customers and furnishes a little normalcy,” Aceves says.

As popular as that is, Aceves says that’s not what has people “losing their minds”—in a good way. No, that would be the half-gallon mimosas to go, available in four flavors ($25).

Given Crema’s comfort food cred—which is about as formidable as it gets in this area—it makes sense that its team is all about furnishing comfort in times of elevated angst.

“We have this whole restaurant family, and they’re scared,” Aceves says. “It’s important to lift our heads up and see what we can do for one another. I think we’re gonna get through it and hopefully be stronger for it.”

Of course a number of restaurants are choosing to close completely, with hopes of reopening.

Santa Cruz’s Oswald is among them. Manager Maria Gibeault cites several reasons—including Oswald’s slightly splurgy price point and the very real fact she’s got enough on her plate simply surviving homeschooling an 8- and 13-year old. (They are selling gift certificates.)

“We believe you can prepare and distribute food safely, and that our friends and family in the industry are doing an amazing job with it, but we didn’t feel comfortable doing it ourselves,” she says. “People really need food—and everyone’s just trying to make it through.”

Also in Santa Cruz the new abnormal feels like a return to old times for David Jackman of Chocolate the Restaurant on Pacific Avenue, who is back to working with his wife Lori.

“It feels familiar,” he says.

The familiar part: Twenty years ago, the couple hadn’t yet tied the knot but were doing what they do now—Lori was making drinks and desserts and David was prepping and cooking for their first restaurant So Say We.

The difference: Work doesn’t stretch into the wee hours of the morning. And most of their “home picnic pickup” traffic is driven by a daily newsletter that goes out to more than 4,000 locals.

With a baker and cook to support them, the nuclear team is pumping out delicacies like their popular pasta “rosettes,” a thick ribbon of fresh pasta stuffed with ricotta, Romano and asiago cheeses that almost blooms in the oven (picture a pasta pinwheel that enjoys moist and cheesy parts and golden crunchy edges). Like each of the businesses Edible has touched base with, David is eager to get his bigger staff back on the job, but he’s enjoying his return to cooking after steadily drifting into more and more administration.

“It’s a lot of fun, especially working with my wife every night,” David says. “It’s so different than running a regular restaurant.”

The biggest challenge, he adds, has been staying vigilant with his DoorDash drivers on sanitation standards. The biggest satisfaction, meanwhile, has been the response of the community.

“The highlight has been experiencing the incredible loyalty of our customers,” he says. “The comments of gratitude are particularly powerful.”

His wife transitions from teaching theater and music remotely for Mount Madonna School, which may have subconsciously inspired her husband to draw a parallel.

“The restaurant business is comparable to live theater,” he says. “It’s a lot more fun than most jobs, but you’re lucky to break even.”

His final note: To-go cocktails by the quart have proved particularly popular.

“People have really enjoyed that,” he says, “because they’re strong.”

Not unlike the local restaurant community, as challenging times have a way of revealing.