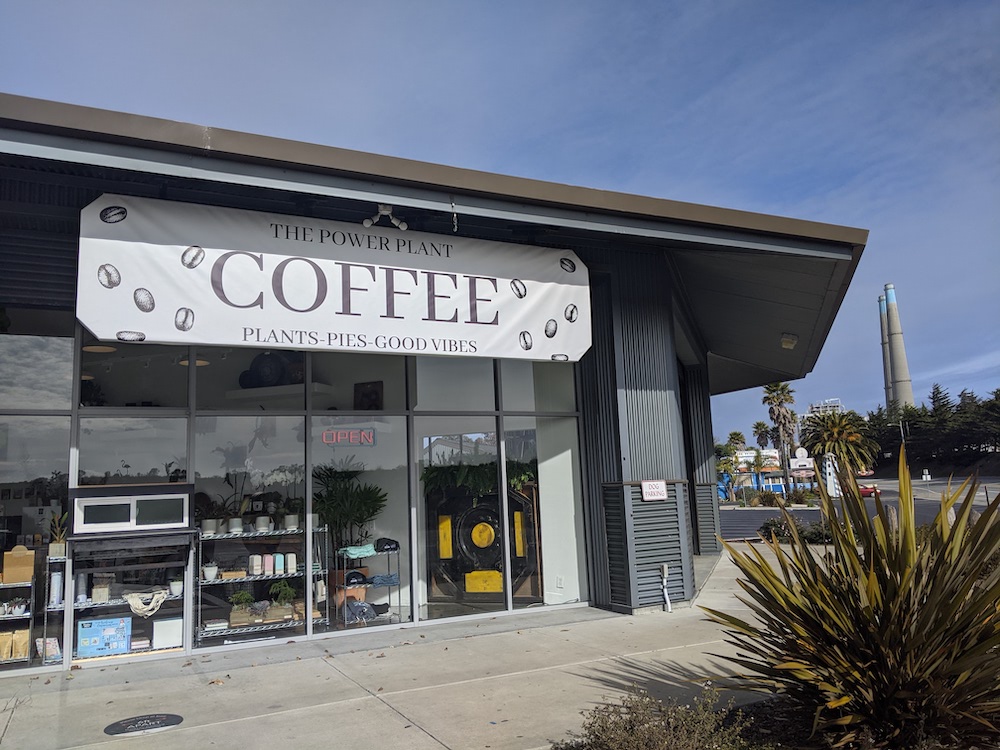 February 23, 2021 – Between its active docks, beautiful beaches, famous fish house and world-class marine research lab, Moss Landing packs a disproportionate amount of intrigue into a city with an official population of 54. A similar thing happens with its newest addition, The Power Plant Coffee & Store. The nearly 3-month-old spot squeezes in a wealth of goodies beyond caffeine: locally sown and well-curated eats, non-coffee drinks, craft soaps, clever gifts, killer books and more, all set against a context of comely plants and quality independent rock music.

The fundamentals are sturdy: Acme Coffee-roasted drips, espressos, lattes, Americanos, cappuccinos and the like; Mighty Leaf teas; and a short list of fresh smoothies like banana-date and cherry-and-chocolate. For many working nearby in fields or on boats, or for those traveling between Santa Cruz and Monterey, that would be enough.

But the spot, which opened just before Thanksgiving in part of the building where Whole Enchilada Marketplace used to be, stands out for its other offerings.

Gizdich Ranch pies are a star, with olallieberry, Dutch apple and cherry in rotation and available whole, or with a daily selection by the slice.

Ad Astra Bread is another featured act, with cardamom buns and large rounds available to go and its bread serving as the foundation for some of the toasts and sandwiches.

The toasts come highlighted by a “guac” with micro greens; a “tahini berry” with hemp hearts: and a “Thai” with peanut butter, cilantro, mint and Sriracha.

Three sandwiches are led by the ciabatta breakfast sandwich with egg, ham and cheese, and the ciabatta lox with smoked salmon, red onion and cream cheese. An experimental salad comes highlighted by goodies like beet kraut, seasonal produce and a dressing crafted with vegan Bitchin’ Sauce.

Rochelle Bartholomew consulted on the menu after a restaurant career that has included spots like La Bicyclette, Sierra Mar and Earthbound Farm.

“The whole ethos of the food at The Power Plant is plants,” she says. “We have a vegan emphasis, but also want to be blue-collar and industrial-friendly with straightforward comfort food.”

In the modest display cooler, a small but mighty inventory includes CBD creams, snacks and sodas; three Perfectly Pressed juices; boutique bottled water; Revol Snax paleo bites; prepared salads and grab-and-go sandwiches. On my most recent stop there, I grabbed a muffuletta on a rustic ciabatta with a motherlode of Genoa salami, Black Forest ham, pepperoni, arugula (a nice surprise), roasted red pepper and olive tapenade. With all that action and a creamy mozzarella, it didn’t need a touch of sauce. Yum.

Drink specials supplement the standard rundown. On our visits last weekend I saw a raspberry white mocha and a dragonfruit smoothie inspired by Valentine’s weekend.

The best items in the retail category, though, have to be botanical, namely canister seed kits, which fall into bee-attracting, sunflower and “beautiful bouquet” themes, and my favorite overall: living-and-breathing Venus flytraps.

It all demonstrates a selective philosophy that’s echoed in Power Plant’s mission.

“Everything is intentional,” the website reads. “From the inside design details to the product choices we carry, everything we do is done with our community in mind. We put lots of love and careful attention in each item. We hope you enjoy our work as much as we enjoy bringing it to you.”

Owner-operator Chuck Drake comes to The Power Plant from his day job as a lead technology officer in Salinas agriculture[1] [2] , where he helps plant 1.5 billion (with a “b”) seedlings and 25 percent of the nation’s tomato supply annually. His wife is popular local artist Sally Russell, who teaches at Stevenson School and consults on TPP’s retail buying.

The expansion underway next door, in what used to house Whole Enchilada Marketplace’s deli, beer bar and bodega-style grocery, will bring more retail inventory, lots more plants, clean lines and seating once indoor dining is allowed. It’s tentatively slated to open by the end of March and will coincide with a widened food menu, along with wine and snacks.

“The idea is someone could fully equip themselves for an adventure down to Big Sur with local products,” Drake says.

More than anything, though, the expansion will realize the full vision Drake has for a place designed to celebrate living with plants—“eating them, drinking them, growing them, and all that involves,” he says.

High-tech and aesthetically stunning modular hydroponic towers from creators like Lettuce Grow, which are typically available only online, will be on display and available for purchase. His intimate knowledge of the ag industry informs that inventory.

“So much of the cost of produce goes into energy and transportation,” Drake says. “Where technology is today, there’s no reason we can’t grow in our homes. You don’t have to have a green thumb to grow perfect butter lettuce.”

He and his team are appointing the larger adjoining space with vintage machinery from 1940s and 50s naval vessels. That fits with a concept that also draws inspiration from the now decommissioned Moss Landing Power Plant towers (the plant switched to gas a while back) and the nearby Tesla Megapack project, the largest of its kind on the continent.

“We’re across the street from a [former] fossil fuel burning plant, but also the future of power generation; we’re surrounded by traditional agricultural farming but presenting a way to grow with new technology,” he says. “It’s a juxtaposition of the old industrial and modern sustainability.”

The same could be said of prioritizing plant-based food over emission-intensive animal proteins.

In other words, there’s a whole new power paradigm in play.