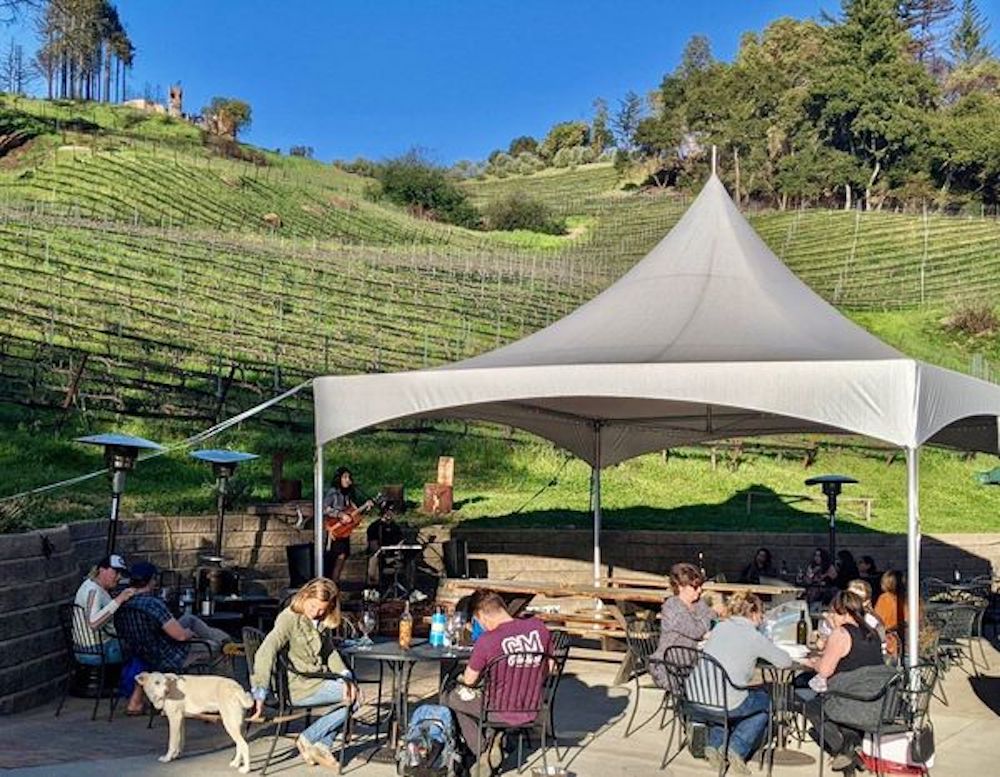 April 16, 2021 – Tall and handsome, with a confident, yet thoughtful smile, winemaker Blake Yarger adjusts his wool cap against the morning chill. He’s surrounded by cases of empty glass bottles, piled high around us, as we sit chatting on a Friday morning outside the Big Basin Vineyards winery. The bottling truck that was supposed to come a few days earlier had a schedule hiccup, so they will bottle over the weekend. The vineyard crew is pruning the Grenache and whacking the cover crop between the vines, as birds dart through the verdant vineyard. Only the haunting charred remains of owner Bradley Brown’s former home at the top of the hill above us give signal as to the towering inferno that raced through this area in August of 2020, destroying homes randomly.

Yarger, who was living in Bonny Doon, lost the home he was renting to the CZU fire as well, as did long time BBV associate Doug Spillman, who lives on China Grade. They had just finished bottling many of the BBV 2018s and 2019s, and the winery and crushpad were filled with the just-bottled inventory. “I had no idea whether we lost the entire winery or not,” Yarger admits. “We had a quarter of a million dollars worth of inventory palletized and waiting to go to the warehouse.”

It was several days of uncertainty and chaos until he realized that the winery and the bulk of the vineyard had survived. But, a good number of vines were damaged and feared lost.

“We’re waiting to see how bad it is: how many of them will come back this spring,” says Yarger, who is living at the winery until a new rental becomes available in Bonny Doon—a place the Marin native has come to embrace. “It feels like home. It has a special vibe.”

How has his touch influenced the wines for this winery that has repeatedly been honored and rewarded for its winemaking prowess? After all, Big Basin Vineyards was selected by Wine & Spirits Magazine as one of the Top 100 Wineries in World in 2018, and by the San Francisco Chronicle as one of the 52 Must Visit wineries in Northern California in 2018.

One of the things Yarger has done is to shift away from co-fermenting the estate Syrah with the estate Viognier, which was planted originally for that purpose. But over the years, Brown’s style has shifted. “Bradley and I have similar preferences for Syrah. We prefer the savory style, with bacon fat, olives and pepper. We reduced and then eliminated the Viognier to heighten the leather and sage, and reduce the perfume and floral notes,” he says.

Yarger recalls that 2011 really forced his hand to use less new oak and to adapt a more terroir driven style that he’s been doing ever since. “Two or three years ago at Hospice du Rhone in Paso, our wines really stood out in the crowd. Compared to the high alcohol wines that are dominant, ours were just gorgeous.”

Enough talk, though. Now it was time to pour it in the glass, and let the wine tell its own stories. So, off we embark on a sampling of the many wines that have been entrusted to Yarger since he came to work at Big Basin Vineyards.

First up was the 2018 Howard Chardonnay from Corralitos, an old Wente clone vineyard farmed by Prudy Foxx. Yarger says in a good year they get 5 to 6 tons from the entire vineyard. This is a high acid, Tinkerbell wine that hovers on your palate, sparking with electricity. The lemon lime and lemon curd of this vineyard is a good contrast to the Coastview Chardonnay, which tends towards more tree fruit, in the peach and pear zone. Both are quite minerally and textural, though. Yarger says he wants to try pushing the ripeness a bit at Howard to see if he can coax more of the lurking nectarine flavors out of the grapes.

The 2018 Coastview has abundant lemon, along with barely ripe apple and delicate quince. It’s textural and lithe and carries its own weight deftly.

Back to the estate we go with the 2018 Roussanne, of which there is just one acre here on the Memory Lane vineyard property. “It struggles to get ripe here. We picked it in November at 22.5 Brix,” says Yarger. Oozing honey and ripe pear, with tangelo, mandarin and a hint of guava, this is such a pretty wine, with only a touch of the waxiness that typically dominates Roussanne. This one was done in five lots, including one new barrel, one amphora and three used barrels (3—4 years each). Each vessel imparts a specific textural component to the finished wine, which is akin to raw silk. Yarger says that the juice starts out dark and rich in color, but that the color drops out to reveal a pristine, high impact white, that clocks in at only 13.2% alcohol.

At every tasting, there’s always one wine that gets inside your head, like a tune you can’t seem to function without. It calls to you like a piece of art or jewelry, and won’t let you leave without it. Such was the case with the 2018 Old Corral Pinot Noir, from the part of the estate vineyard to the east of Bradley’s former residence, overlooking the San Lorenzo Valley. These vines, for the most part, escaped damage from the CZU fire of 2020, although it’s not clear how or why the fire spared them. We’re glad they did.

“Bradley grafted the vines over to Pinot from Syrah in 2014,” Yarger tells us. “The clones are Mt. Eden and Swan. Which one do I love more? It’s the old site vs. clone question. Old Corral is really special.” He wasn’t kidding. One whiff of the autumnal roasted chestnuts and apples and I’m a goner. Muscular yet explosive, like Simone Biles doing a flawless floor show all over your palate, this was done in one-third new oak, and registers only 13.1%, which is darn low for California Pinot Noir. Buzzing with excitement, it sends telegrams of raspberry, cedar and red currant to every part of your brain. Message received. It’s a hopeless love affair.

It’s evident that the lighter touch initially imparted by former assistant winemaker Brad Friedman continues apace. Each wine reveals the balance beam of getting just the right amount of oak to support the fruit, without taking anything away from it. Through all, there’s a tightrope of acid that provides the centerline focus, pulling the wine from opening salvo to finish.

He’s trying to decide what to do with the estate Viognier, though. They have two sources: the estate and the Broken Top Vineyard in Scotts Valley, owned by Bradley’s brother, Derek. It makes absolutely stunning Viognier. “But, I don’t need two Viogniers,” says Yarger. He’s thinking about Picpoul or Chenin Blanc, perhaps even grafting some of the Roussanne to a higher acid white, as the soil chemistry here tends towards softer acids. They’ve given up on Mourvedre here, as it really needs limestone to properly perform.

We visit one last wine before wrapping up, the 2017 Sixty-Two Terraces Estate Syrah. The first year of this wine was 2016, when they bottled just the steepest part of the vineyard. The 2017 contains the “Baby Block” of Syrah and the “Power Block” of Syrah, both of which are steeply terraced blocks, planted with Alban selections. The wine was done with a 3% Viognier co-ferment. Tightly wound and begging for air, the aromas reveal lavender, white pepper, raspberry, roasted meat and plum. Classic Syrah, it disrobes layers of bay leaf, leather, black fruit and licorice as it loosens up. At 14.5%, this wine is on the riper side, but will develop well with age. “We are edging up our pick dates to claim more of Syrah’s savory characteristics,” Yarger explains. “We intend to get it ripe, just earlier.”

Given the history of severe weather intensification due to climate change, it seems like a smart plan. Reading the tea leaves, they also bought a diesel generator in 2018. It saved their bacon in 2020 and it’s likely not the last time.