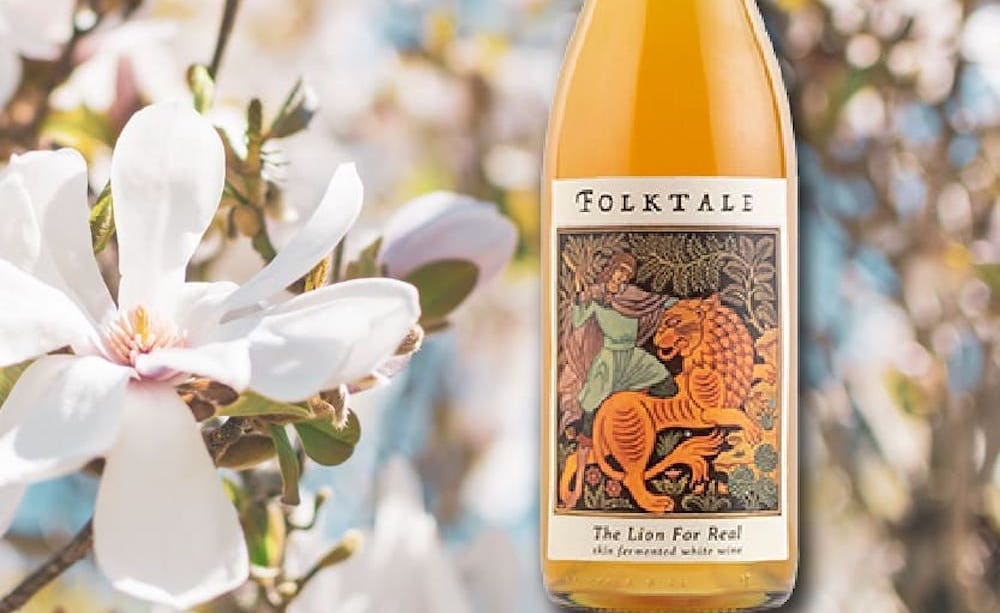 April 23, 2021 – Quite frankly, it looked a bit like mustard dressing. And when winemaker David Baird told us the liquid in the beaker was a solera style “orange” wine, we were more than a little skeptical. Mustering our collective sense of adventure, we set aside our preconceived notions and took a sip. Lo and behold, it was utterly delicious. Not some weirdass natural wine that tastes like flat Tang, a mangled Orange Julius or a three day old tequila sunrise complete with stale cigarette butt. Nope, it’s a straight up mouthpleasing beverage that brought appreciative nods all around.

While this “orange” wine might not be new to some Folktale Club Members, it was sure new to me. Called “The Lion For Real,” after an Allen Ginsberg poem, (more on that later), it’s made in the solera style, which means it’s a combination of successive vintages, each complementing and enriching the other, in a manner similar to the way sherry is made. Baird says he fermented separate lots of Chardonnay, Riesling and Grenache Blanc, on their skins, just as you would make a red wine. And then he blends them, adding to the barrels each vintage, to create layers of flavor.

The resulting wine has a yellowish hue, with a blush of apricot, and the aromas are a mashup of floral, musk melon, mandarin and applesauce. Initially, the sensation in the mouth is of serious texture, much as you’d get from a rosé of Syrah, where the tannins of the grapeskin pop into your mouth, like biting into a ripe plum or apricot. Not at all weighty though, the buoyant flavors are of Tuscan melon, Gravenstein apple, tangelo and tangerine juice, creating decided complexity. Amazingly, the finish is quite brisk. We were actually impressed by how well it paired with food, including our beet and goat cheese and quinoa salads, handling the vinaigrette dressings with ease.

Folktale owner, Gregory Ahn, admitted that he thought Baird’s idea was completely nuts. “I thought he was crazy when he proposed making an orange wine. Now it is one of our more popular wines…of course! He kept nagging me about a name and design for the label, so I named it after Ginsberg’s poem, ‘The Lion for Real.’ The whole album is this crazy funky jazzy recording that is the epitome of a beat poetry album, but the title poem reads like a fable about going crazy.”

Look it up and read it yourself, if you’re curious, but suffice it to say, the idea of the wine, along with the poem itself, are far crazier than the resulting wine, which has proven to be such a success, that Folktale is making it available to the general public, and even putting some into distribution. The label is total Folktale, echoing the lines:

“I came home and found a lion in my living room

Rushed out on the fire escape screaming Lion! Lion!”

Ahn admits this crazy concept won him over, too. “In the world of orange wines, I think ‘The Lion For Real’ is very balanced, clean, consistent, and enjoyable. I’ve had quite a few that are too funky…often flawed. That’s definitely not our style.”

For those who yearn for the unusual done well, or the used-to-be-unusual now done way too much by those who should not, Ahn also suggests you try Baird’s solidly spritzy Pet Nat of Sangiovese and his carbonic Sangiovese. The latter is done by shoving whole clusters into a barrel, inserting the bung and letting the grapes conduct spontaneous individual berry fermentations. In this anaerobic environment, each one slowly explodes, like a million little hand grenades going off. The result is a super fresh splash-riot of racy red fruit, like a Beaujolais Nouveau, only far more interesting.

What else does Baird have up his sleeve? Plenty.  Stay tuned for the next wild tale.

2020 J. Lohr Flume Crossing Sauvignon Blanc, Arroyo Seco – Aromas of lively pineapple and grapefruit, comingled with lime, lemongrass and nectarine, announce a high energy wine in store. A brisk flood of lush lime, white grapefruit, honey tangerine and crisp white summer peach make this one of the most enjoyable SB’s ever under this label, and among the first 2020’s I’ve enjoyed. I’ll drink this any day: it shouts “Spring!” Good job, J. Lohr winemaker, Kristen Barnhisel!

2019 Sarah’s Vineyard Tondré Grapefields Chardonnay, Santa Lucia Highlands – Abundantly floral, with enticing Meyer lemon, forsythia, hyacinth and a hint of chamomile: that’s how this abundant Chardonnay presents itself aromatically. And it just gets better from there. Fantastic lemon curd, Shaker lemon pie, tangerine and a bit of coconut mallow puff make this a complete novel. It has a creamy, satiny texture, and its smooth arc across the palate reminds one of the way Blythe Danner or Gwenyth Paltrow float across the screen. This may be the best Chardonnay Tim Slater of Sarah’s Vineyard has yet made. Get a case.

2020 Pelio Vineyards Pinot Noir Rosé, Carmel Valley — The appealing silk-screened packaging will lure you in: the logo of the crashing wave looks brilliant against this pale pink beauty, with its aromas of cranberry, fresh cut pineapple and currant with a hint of guava. Skin contact gives it some texture and imparts a touch of tart rhubarb, pink lemonade, and hint of smoked jalapeno. Easy drinking for poolside sipping, this would be nice with ceviche, cantaloupe and Serrano chile salsa or fish tacos with grilled pineapple and tomatillos. There’s a Pelio Vineyards tasting room in the near future. We’ll keep you posted.