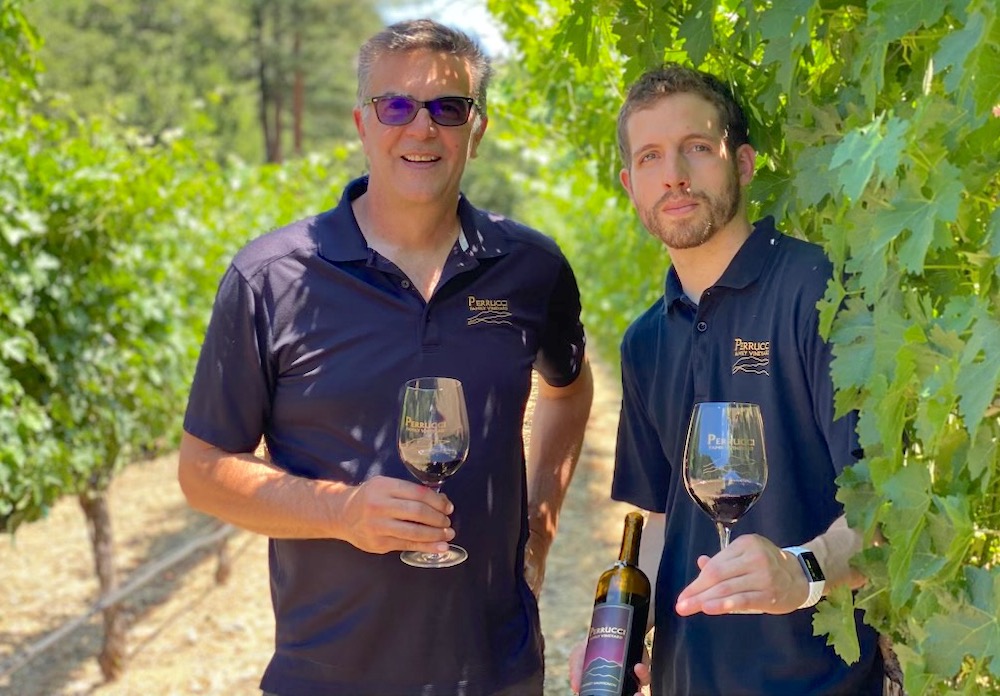 June 25, 2021 – There’s an amazing vineyard property on Kennedy Road above Los Gatos, with a sunny Mediterranean clime and a feeling of serenity. As you climb towards it, the sky becomes increasingly blue, accentuating the contrast with the verdant hills. You feel as if you’ve arrived in Tuscany as you turn into the gate, flanked by wine barrels, one of the few cues that there’s a winery hiding in there somewhere.

The 29-acre parcel is home to Don and Gen Perrucci, parents of Greg Perrucci—who has been the face of Perrucci Family Wines since it started in the mid 1990s. It’s also the site of a five-acre vineyard where Cabernet Sauvignon, Sangiovese and Syrah thrive in the warm climate. Greg, his sister Kristin and his brother Andy, along with their respective spouses, all live on neighboring parcels, in the quintessential family compound. Andy’s son, Alec, who graduated from Cal Poly and has made wine in Paso Robles (J. Lohr, Orcutt Road) and in Hawkes Bay, New Zealand, became the winemaker of record for Perrucci Family Wines as of 2018. He takes a thoughtful, methodical approach to everything, seeking optimal fruit expression and wanting each wine to have its own stamp.

The entire Perrucci family is involved in the wine business. Farming is in their blood. After they sold off the last of their fruit packing plants and most of their orchards to Dole in the mid 1990s, they began planting grape vines. Greg says his great grandfather came to the U.S. from a hill town east of Potenza, Italy in 1905, where they grew pecan and apricot trees. He settled in Little Italy in San Jose and naturally gravitated towards the Valley of the Heart’s Delight, as the Santa Clara Valley was then called. Literally, it was a sea of pink and white apricot and plum blossoms in the spring. Greg’s great grandfather and grandfather, built up a massive fruit packing operation that eventually included hundreds of acres of orchards and packing sheds from Yuba City to Bakersfield, along with a trucking company that delivered fruit to the processing and packing plants, and then trucked the packaged goods to the rail lines, airports and other depots for distribution.

“This was true vertical integration,” explains Greg.” We did it to control the quality of the fruit. If our name was on the package, it had to be good. We have the same philosophy regarding grapes.”

It’s interesting to note that of the winery’s offerings, half currently come from offsite vineyards. It didn’t start out that way. Greg says that unlike other wineries, that would buy fruit from other sources while their own vineyards came online, because of their experience with vertical integration, the Perrucci’s waited patiently for their estate vines to produce. “We wanted to see how our own grapes did and how the wines turned out. We wanted control of the product and the quality. It’s always been a hallmark of our family.”

At some point, though, the lure and popularity of Pinot Noir in the Santa Cruz Mountains became impossible to resist. “It was David Bruce that made us fall in love with local wines made from local grapes. Our history and knowledge of wine up until the early 1990s was focused on Napa, Sonoma, France and Italy. There were a few other notable areas, but the Santa Cruz Mountains was not one of them. That was until we stumbled upon David Bruce. I’ll never forget my first bottle of David Bruce Pinot. Changed my thinking about the grape. That’s when we knew we could plant grapes on our Estate and make good wine. It took me 15 years to convince my father to let us make that varietal and now we are winning some of our highest accolades with it.”

One drawback to this idyllic mountain site above Los Gatos was its balmy warmth, which precluded growing cool climate varieties like Pinot Noir, and for that matter, Chardonnay.

So, Perrucci partnered with John Bargetto, whose Regan Vineyard in coastal Corralitos, was an attractive source of Pinot Noir. Bargetto drove a hard bargain that stipulated the purchase of his Merlot in order to obtain Pinot Noir. It all worked out, though, as the Regan Merlot has turned out to be one of the best and most popular wines under the Perrucci label. In 2009, Perrucci started buying Chardonnay from Regan and today, they make both an oaked and unoaked version of the grape. In turn, Bargetto buys some Cabernet Sauvignon from the Perrucci’s vineyard. It goes into the Bargetto Reserve Cabernet.

“We’ve had a great relationship for 17 years,” says Perrucci. “He farms the way I do. I’m obsessive about the way I grow grapes, so to have someone I can walk a vineyard with and see that it’s done exactly how I would do it, is fantastic. It’s a load off my mind.”

All the Perrucci wines are solid, many of them multiple award winners at major competitions. In addition to the Regan Vineyard Pinot Noir, Merlot and Chardonnay, the Perrucci’s source Syrah from a neighboring Kennedy Road vineyard, which they also farm.

When asked about the award-winning wines from Regan made by Perrucci, John Bargetto told us, “Greg submits Regan wines to more competitions than anyone I know, and he has done quite well, especially in the San Francisco Chronicle competition. Soquel Vineyards has also done quite well with our Merlot and Pinot Noir.”

How can you get hold of Perrucci wines? Join the Wine Club, for which special tastings are held yearly, or arrange a private tasting.

“We love sharing our passion for wine and food,” says Greg, fourth generation California farmer. “We love hosting people here on site. Our wines are in a restaurant or two, but we really like selling direct. Sharing this special place, along with good food and wine: it doesn’t get any better than that!”

They have a beautiful wood-fired pizza oven, fed by the copious amount of wood felled from the many oak trees on the property. Greg is exceptionally handy at pie management, serving up favorites like pesto mushroom, and nectarine, Gorgonzola and caramelized onions. And then, there’s the Italian BLT, with tomatoes, bacon and arugula.

Perrucci Family Wines is not open regular hours, but visits can be arranged by appointment. Club members are not charged a tasting fee.  Non-club members can arrange a visit with a phone call or email. A minimum of four guests is required, and the fee is $10 per person for four wines. Additional wines and amenities can be negotiated.

The family does their best to accommodate serious wine lovers who want to experience this special place. One visit and you’ll be back. You might even see Greg’s Dad ferrying hot from the oven pizzas down the hill to the winery in his Mercedes.  Like Greg says, it’s a vertically integrated operation.

2020 Ferrari Ranch Pinot Noir Rosé – Soft salmon in color, it looks more like Grenache than Pinot Noir, but the rose petals, hibiscus, jasmine and pink grapefruit in the nose lead you straight to Burgundy. Tart cranberry, hibiscus tea, pink lemonade and crisp apple keep the palate fresh, and there’s a diversion into the spice cabinet, with coriander, curry and fennel pollen showing up on the finish. A brilliant wine that satisfies more with each sip. It’s a classy bargain at $28. Order directly from the winery, or arrange a private tasting with a view you won’t forget.

2019 Beauregard Oeuf En Béton Chardonnay – Unoaked Chardonnays are becoming much more popular as consumers realize what a lovely and lively beverage this can be when not weighed down by oak. Not that oak is a bad thing, but clearly, there are some vineyards that produce such compelling fruit that you don’t need oak to fill in any blanks. Such is the case with this brilliant and seductive wine, done in a concrete egg, one of Ryan Beauregard’s favorite ways to age chardonnay. Wildflower honey and lime zest perks up your nose the same way as the relentless flood of Meyer lemon, green apple and orange marmalade lights up the palate. It just oozes withfreshness and a satiny texture from the vessel. Unlike stainless steel, the egg imparts no flavor, just texture. It gently micro-oxygenates the wine similar to a barrel, but with no oak flavors. Purchase at the Slow Coast Wine Bar in Davenport or at the winery in Bonny Doon. $50

2019 Albatross Ridge Chardonnay En Béton – This is my favorite of all the Albatross Ridge Chardonnays thus far: it’s also done in concrete, this time in a concrete amphora. It’s the second time Garrett Bowlus has done a Chardonnay this way, and by golly, he’s on to something. The lush, yet brilliant flood of stone fruit and alpine flowers begins in the nose and carries over to the palate. It’s an explosion of summer fruit, including nectarines, pear, and apricot, buoyed along by distinct minerality and Energizer bunny acid that won’t quit. Such a superb and satisfying texture could only come from concrete. Order from the website, or visit one of the two Albatross Ridge tasting rooms, one in Carmel and the other in Carmel Valley. $55.