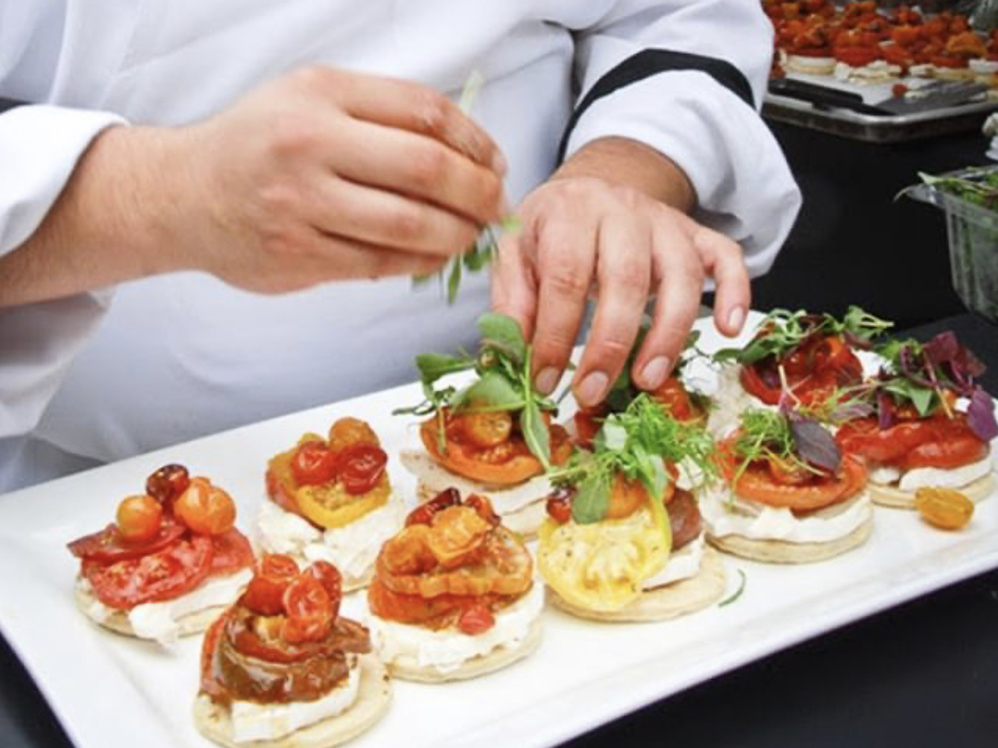 April 21, 2020 – Last Sunday was projected to be one of Aqua Terra Culinary’s biggest days of the year, deploying dozens of people to feed the masses at the Sea Otter Classic and Pebble Beach Food & Wine.

Instead both events were cancelled last month, as was another big Aqua Terra April event, the EG Conference on innovation. That left Aqua Terra founder and chef Dory Ford at home pondering how his company—and the industry—will change.

“We know that this has an end, but when is an unknown,” he says. “For a while it’s going to be Groundhog Day. The longer the lights are off, the more people are going to be really adversely affected. Just two weeks from now the conversation will be further intensified.”

Sunday, April 19 was also exactly one month after I first reached Ford about the implications of coronavirus on March 19, or what feels like 444 years in quarantine time. Ford saw enough client cancellations in February that he closed his Point Pinos Grill and laid off his team long before Gavin Newsom ordered a shelter in place, to conserve resources and to get his people to the front of the unemployment line.

“This isn’t like a fire or hurricane or other weather/earthly event,” he said March 19. “That’s why everyone bought toilet paper and water, it’s what you do in a disaster. This is different. This is a complete mind shift.”

Many lasting effects are already evident, he believes, including an upswing in common courtesy and acknowledgements of our fellow humans.

“It’s a real conversation with someone processing your groceries, a little nod to someone at the gas station,” he says. “The divide has lessened—not in the media but in the population. Consumerism, the wretched excess, has tailed off. I think there’s more charity, more concern about your neighbor.”

For the industry he predicts this pause will offer business owners a chance to reconsider everything. At Aqua Terra, he’s thinking about keeping his team super lean and subcontracting everything from porcelain to staffing.

“I’ve been around a long time and seen a lot of things and see people do a lot of things,” he says. “I’m a realist and a survivor and an observer by nature. I’d rather observe a while longer and make decisions on that.

“A new way of doing business is going to emerge.”

In addition to Ford, I checked in with a range of local chefs and a winemaker who understand the industry, people who have opened (and closed) a bunch of businesses—and made it through paradigm twisters like 9/11 and the Great Recession.

Shadowbrook co-owner and operator Ted Burke has been around long enough to survive the 1989 Loma Prieta Earthquake too—and remembers fielding phone calls from China to South America from fans checking on the iconic Capitola restaurant and its employees after the quake.

He acknowledges uncertainty is expansive. “I wish I had a crystal ball,” he says. “I don’t know what people are going to do. There’s a lot of pent-up cabin fever on steroids, and there’s also people who will cocoon and wait till next year [to eat out].”

He hopes relief like the government’s loosening of entertainment tax deduction (allowing for a meal’s full write-off rather than half) stays in place and expects to-go and curbside business to linger. His main prediction, meanwhile, is this: After shorter-term chills thaw out, long-term effects will be minimal. The crisis will inspire people to embrace fine dining with greater intensity.

“People are going to want a little bit more, to savor things they missed, the social part, the culinary part,” he says. “It’s not just food, it’s an experience beyond people just slinging hash. Yes, they’re cooking more and getting better at it, but it’s a meal, not a restaurant experience, with service and ambience, a wide selection of foods and beverages and not having to clean it up afterwards. They can’t get that at home.”

Chef Mike Jones of A Moveable Feast believes that the huge boom in home cooking helps people appreciate what he does. After two years at Douglas Ranch, he’s relocated to Massa Tasting Room (formerly Heller Organic Estate) in Carmel Valley Village and is dishing prodigious value out the back door. That includes deals like $8 braised lamb shank, $7 roast half chicken and $10 duck confit. (Menus are available on the Cachagua General Store Facebook page.)

“With how much people are cooking at home, they’re keying off stuff I’m doing and I’m describing,” he says. “When [restaurants reopen], they may say ‘I’m never cooking again!’ but I think they’re learning to do good restaurant things and thinking about product, preparation and presentation with more depth. I think that will be good for restaurants with attention to detail.”

“The slop-it-on-the-plate thing will be less appealing,” he adds. “Eaters are going to be more appreciative. And pick their spots.”

For Jones, the primary lasting outcome of the crisis, when it comes to restaurants, is clear: Operations that aren’t really into it will struggle to survive.

“The first thing that’s going to happen is all the cute little places with absentee owners are going to go away,” he says. “If the owner isn’t on site with a long time chef or something similar they’re not going to make it.

“The only guys left around will be the ones who like it—like me, this is what I do, it’s not really a choice,” he continues. “You can’t wake up in the morning and decide to be really into serving people any more than you can wake up and decide to be African-American.”

Charlie Hong Kong co-owner Carolyn Rudolph believes appreciation is already deepening, in a different way, pointing to an appreciative parade of cars driving along Watsonville fields with signs of gratitude for farm workers. (An image of the salute below appears on CHK’s Instagram feed.)

“People are realizing there’s a thread connecting us,” she says. “When they go and eat in a restaurant there’s more going on here than a plate of food—people are now more aware that it leads back to other things, and that’s more than a chef. I think that’s going to last.”

In keeping with its belief that feeding people is a “spiritual act of generosity,” Charlie Hong Kong has joined an alliance of Santa Cruz restaurants feeding ER workers, as EMB reported last week. It’s also planning for the 50th annual Earth Day on April 22, which comes as pollution recedes while the world shelters in place. The most important action item, though—as eaters will be conscious of budgets as much as ever—is to continue offering healthy, fresh and affordable dishes.

Patrice Boyle, who owns Soif and La Posta in Santa Cruz, is another hospitality veteran who is optimistic appreciation will grow.

“I hope people recognize the value of small businesses and how important they are not just to the financial economy but the whole functioning of how we live,” she says. “They’re a crucial part of the fabric of a community.”

That was the thrust of a California Restaurant Association letter to Gov. Newsom last month. “California’s restaurants are the cornerstone of every community and an economic engine that employs 1.4 million foodservice workers and generates more sales tax ($7 billion annually) than any other industry,” it read, in part. “The vast majority of the state’s 90,000+ restaurant locations are owned and operated by independent proprietors who live in the communities where they serve their customers. Additionally, 60 percent of California’s restaurants are owned by people of color, reflecting the great diversity of our state.”

“I think it’s going to take a long time before this passes—and then it will take a long time after that before business returns to ‘normal,’” she says, anticipating rolling closures through 2022. “We’re really going to need people to think outside of the box.”

She urges locals to continue to support farmers markets and local restaurants that remain open for take out and delivery.

“The big companies will be fine,” she adds, citing the $20 million given to Ruth’s Chris Steak House for payroll protection. “The little guys need it badly.”

Interestingly, when it comes to the wine world he inhabits, Bonny Doon founder Randall Grahm thinks the little guy and the big guy will be fine. It’s the operations between the two he fears will be hit hardest by an extended depression.

“The trend before the virus hit—if I read it correctly—was that we had an industry which was insanely competitive, on a global scale, and that’s going to intensify,” he says. “You have to deliver impeccable quality, impeccable story, impeccable value. You have to hit on all those things.”

The big companies have the budget and marketing clout to check those boxes, he believes. The micro wineries do too, because they can access their audience and buyers through closely knit business-to-consumer relationships and keep pricey labor at small vineyards limited.

“Everyone in the middle is in trouble,” he says.

He goes on to theorize that the “meaningful, unique, intimate experience” of a wine tasting can’t be approximated virtually. “It has to be very tactile and very real for people,” he says. “For small wineries to survive we’ll have to get back to something more tangible and grounded in real life.”