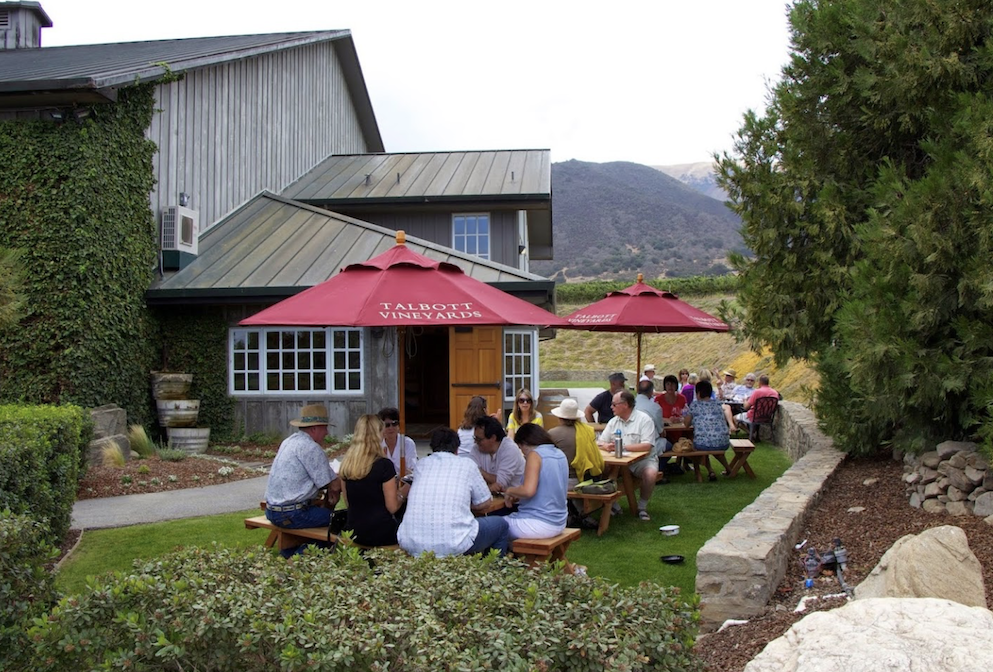 February 4, 2020 – It’s only temporary, but Talbott tasting room is returning home to its River Road tasting room in Soledad, after a long and glorious run in Carmel Valley Village. Until the new Talbott tasting room in Carmel-by-the-Sea is completed, hopefully sometime in March, visitors will be welcomed to the Talbott winery production facility at 1380 River Road, daily from 11 until 4pm. For long-time club members, this will be a beautiful homecoming. As tiny as that tasting room is, its proximity to Sleepy Hollow Vineyard, where all the magic happens, makes it a welcome return to roots that run very deep.

The River Road winemaking facility and the famed Sleepy Hollow Vineyard are the heart and soul of the Talbott enterprise. Considered one of America’s Grand Cru vineyards, the 565-acre Sleepy Hollow was originally planted in 1972 to Chardonnay and Pinot Noir by the late, legendary winegrower and visionary Jerry MacFarland. Speaking of history, now’s a good time to do a little recap.

Winegrower Robb Talbott and his father Robert—founder of the Talbott tie company—began Talbott Vineyards in 1982. They were eager to pursue the Burgundian style of winemaking they’d come to love during their many trips to France. Their first tasting room in Carmel Valley Village, which some might recall was a tiny spot just outside the village, opened in 1989. Later, around 2011, they moved to the site of a former furniture store at 25 Pilot Road. Robb painstakingly transformed the space into a masterpiece of an open gallery, from which many motorcycles and artifacts from his racing days were hung with artful care. At first, the aroma of motor oil and other effluents filled the air, but eventually, it all aired out nicely, and the sweet smell of Pinot took over. The motorcycle collection moved to its current location, at Moto Talbott, 4 East Carmel Valley Road, in 2016.

After making wine from what is arguably the best-known vineyard in the Santa Lucia Highlands for well over a decade, Robb Talbott purchased the Sleepy Hollow vineyard in 1994. He was later rewarded for his efforts, with the 1990 Sleepy Hollow Chardonnay garnering a monumental 100 points from Wine Spectator in 1997. Pause there momentarily. A seven-year-old wine scored 100 points from the most widely revered authority on wine in the world. Talbott sure knew what he was doing when he purchased that hallowed piece of dirt. He went on to create a brand that made its way onto top wine lists everywhere and onto grocery store shelves.

But, alas, after decades of building a business centered around his family, with wines named for his wife and all their children, Robb decided to exit the stage.

He sold the winery and vineyard to E & J Gallo in 2015, that subsequently brought in local legend David Coventry to take over from the equally legendary Dan Karlsen, who had been making wine at Talbott for nearly a decade. Both had previously worked at Chalone and Karlsen recommended Coventry for the job. (Coventry’s resume also includes Morgan, where he helped develop the famed “Metallico” Chardonnay, one of the top selling unoaked Chards in retail today.)

Since taking over the winemaking reigns at Talbott, Coventry says Gallo has been nothing but supportive in investing in vineyard care and much-needed maintenance. “We are replanting with modern clones and rootstock, and putting in Pinot on the top of the hills and Chardonnay down a little lower, as it doesn’t mind the wind so much. It’s allowing me to fill out the jigsaw puzzle of flavors. The farming is at such a high level, that the fruit is incredible. The horsepower is insane! We’re constantly tuning our oak regimen to support and enhance the intensity of the flavors.” He mentions expanding the oak portfolio with many larger puncheons that impart oak influence more slowly, adding beautiful complexity to the wines.

Coventry says it’s a bit ironic that the new Carmel tasting room is going into the site of the former young men’s clothing store, Top Notch, where he used to shop for clothes when he was in high school. He says the place is spacious, located in a cute courtyard on Lincoln, with an outdoor patio. “So many of the tasting rooms in Carmel are so tiny, they appear crowded, which discourages visitors. This should be plenty inviting.”

Once the new tasting room is open, Coventry expects that some of his new “experiments,” including the Block designate Pinot Noirs and Chardonnays, will be released to the public. They’re small scale, at 400 cases each, but represent what he and his winemaking team deem the most expressive areas of the vineyard. “This is a great vineyard in an exemplary spot. The newly planted blocks are just amazing!” says Coventry, noting that wine critic, James Suckling, just gave the two Block Pinots 95 points.

Gallo considers Talbott one of its crown jewels and said, in a statement that the River Road tasting room, typically closed to the public, will be open for “a unique and rare experience, starting February 3, until we are settled into our new home in Carmel-by-the-Sea. Join us for this rare peek inside the winery, nestled among the iconic Sleepy Hollow Vineyard, to enjoy your favorite varietals, try our new releases and view different parts of the winemaking process.”

The River Road tasting room will be closed on February 17th, however, in honor of President’s Day.

Rumor has it that Blue Fox Cellars, which currently has a tasting room on Cannery Row in Monterey, will be moving into the former Talbott space on Pilot Road, owned by Walter Georis.  Sounds like a March timeframe.  Stay tuned!