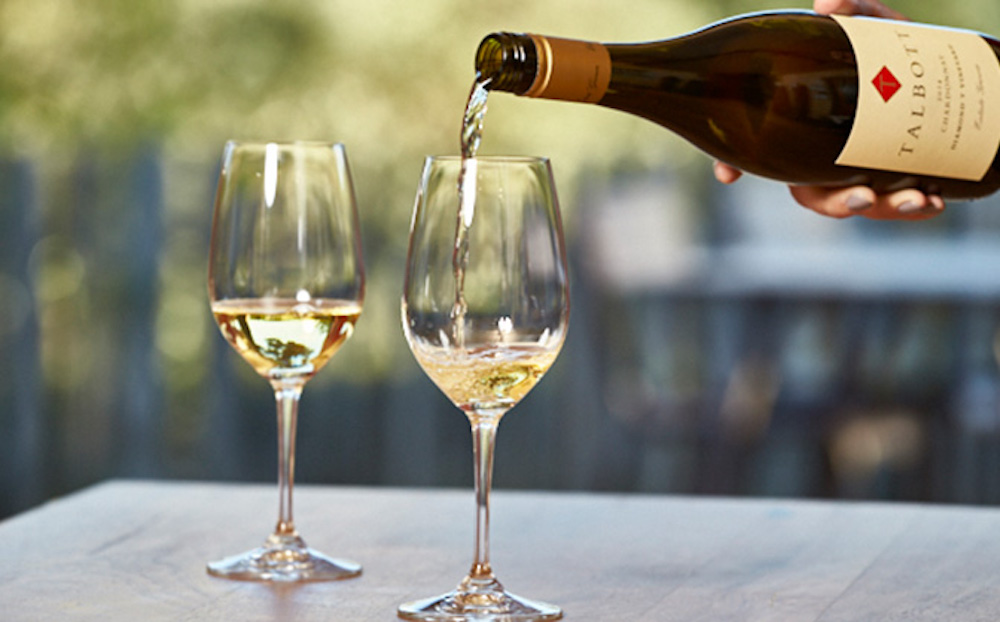 July 28, 2020 – Sometimes circumstances just won’t stop conspiring against the best-laid plans. It can’t be a coincidence that just as Talbott closed down their Carmel Valley tasting room in 2019, thinking they could move into their new home in Carmel, a construction issue threw a wrench in the works.

Thereafter, sensing a lengthy delay, Talbott briefly reopened the old River Road tasting room in January and February of this year. Thinking Carmel was imminent, they closed the River Road outpost at the beginning of March. Talk about timing. Then Covid hit, bringing the wayward train to a screeching halt. It seems like they can’t buy a break but remember, this is Gallo, and they know a thing or two about perseverance.

Now, after a couple of weeks of being open for Club Members only, they have begun hosting tastings of their award-winning Chardonnay and Pinot Noir at their two outdoor tasting tables on their private patio by reservation only to the public.

It was worth the wait: just don’t wait too long to taste the latest releases. David Coventry has been winemaker at Talbott since 2016 and he knows a thing or two about the Sleepy Hollow Vineyard on River Road. Over the years, he spent time with his predecessor and mentor, Dan Karlsen, learning how subtle changes in farming at Sleepy Hollow and winemaking tweaks in the cellar altered the outcome of the Talbott portfolio. When he took over winemaking here four years ago, he set out to make the best wines ever made from the legendary 565-acre Sleepy Hollow Vineyard that Jerry McFarland planted in 1972 and that Robb Talbott later made famous when he purchased the vineyard in 1994. You’ll recall Gallo purchased Talbott from Robb in 2015.

Coventry is working closely with vineyard manager Kevin Ryan to map out a plan for a complete Sleepy Hollow Vineyard overhaul. “We are on target to replant between 30 and 40 acres each year, sometimes 60, over the course of 6 years. We’ve done 150 acres already, and have 120 more to go.”

Packaging is also changing, which you will see beginning with the 2017 vintage, where the Sleepy Hollow Vineyard Pinot Noir gets a more glamorous black label and handsome screwcap. The flagship 2017 Sleepy Hollow Chardonnay wears an updated white label and handsome gold cap, and pours into the glass with a yellow-green hue that tells you it doesn’t have a lot of toasty oak on it. Aromas of lime, lemon cream and mandarin combine with a whiff of gardenia and just a hint of pear. The mouthfeel is rich, yet supple, with lots of apricot and orange marmalade atop slices of toasted brioche, along with lively tangelo and lemon pie. Plenty of acid is well-integrated with a near perfect marriage of oak and fruit.

The 2017 Sleepy Hollow Pinot Noir is simply huge—it’s broad-shouldered and almost burly, with intense dark fruit, like red plum, cherry and chocolate covered raspberries. One gets a distinct impression of tobacco and dark-baked brownies across the palate, with pervasive acid that keeps everything fresh. There’s nothing like the northern part of the SLH bench.

Kali Hart, a strong Talbott brand on store shelves and restaurant wine lists (remember those?), remains. Starting in 2015, Talbott began sourcing Chardonnay and Pinot Noir for the Kali Hart wines from the Olsen Ranch Vineyard, on the southern end of the SLH bench, where the climate is warmer and fruit develops riper flavors. This helps them keep a consistent balance in the wines, requiring less intervention to create a fairly uniform product.

Under Gallo, Talbott is retiring some of Robb Talbott’s family names as the brand moves forward. Gone are Logan (Robb’s son) as of 2016 and Sarah Case (eldest daughter) as of 2018, to focus instead on specific Block wines that Coventry and his assistant winemaker, K’Sondra Fredrickson, began making in 2017. These are being developed primarily for club members.

The first two Block wines released were 2017 Pinot Noirs from Block 48 South and Block 23 West: both rated 95 points by James Suckling. The 2017 Block 48 is mostly clone 113 from one 2.4-acre section that Coventry says delivers an exceptional purity of flavor. It’s an intense, laser-focused wine with great horsepower and a sinewy sheen on the forever finish. It exhibits refinement, perfume and nobility.

The 2017 Block 23 Pinot Noir reflects three different clones from one spot in the vineyard, clones 113, 114 and 115, which were co-fermented in what he calls an “old technique to develop synergy.” It has a bigger, juicier frame, delivering blackberry, raspberry, blueberry, rhubarb and boysenberry. With slightly higher alcohol, 15.7 percent vs. 14.7 percent, it doesn’t come across as hot, but instead, robust, energetic and brimming over with unctuous fruit.

Coventry says they strive to make each Block wine “excellent, but different.”